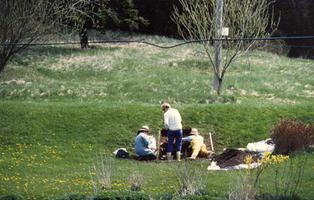 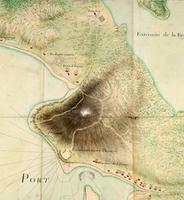 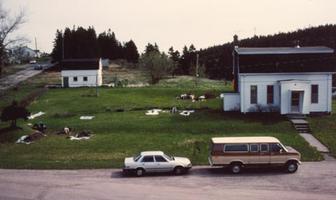 View of the site facing north. The lockmaster's house is to the right, in the background; behind the fort wall was a shed, now demolished (courtesy R. Ferguson). 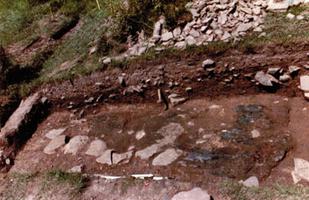 Fort Saint-Pierre is a French trading post spanning the years c. 1632 to 1669. It is situated on the southeastern shore of Cape Breton Island, in the village of St. Peters, on the Atlantic coast of a narrow isthmus separating the inland waterway of Lake Bras D'or from the open ocean. Since 1869 the lake and ocean have been connected by St. Peter's Canal. Earth removed from the canal was dumped over and in front of the site, so that the site is now about 75 m inland. The canal replaced an ancient portage route utilized by the Mi'kmaq of the area. The existence of this portage is probably what prompted the location of the post at this spot.

Fort Saint-Pierre was established by some of the shareholders in the Compagnie des Cents-Associés. Granted all commercial rights, they formed the Cape Breton Company. With the rights came possession of Fort Sainte-Anne on the northwestern shore of Lake Bras d'Or, built in 1629. It is not known if Fort Saint-Pierre was also built at that time or was constructed later by the Cape Breton Company investors. The post is first mentioned in an act dated March 14, 1640.

No description exists of the physical layout of this first Fort Saint-Pierre, but it was probably similar to Fort Saint-Anne. Like the latter, it would have contained accommodations for workers (les engagés) and soldiers, a chapel, cookhouses, a bakery, latrines and diverse outbuildings. Although built primarily as bases for cod fishing and the fur trade, both forts were fortified because of possible English attacks, but mostly as defense against competing trading companies. The location of Fort Saint-Pierre on the Atlantic and on a Mi'kmaq portage route to the interior of Cape Breton and Lake Bras d'Or was advantageous for both fishing and trade, although the shoals and narrow channels of its harbour made it difficult for large ships to land. Even so, the Cape Breton trade was not particularly lucrative, which caused ownership of the post to change hands frequently, either via purchase or outright attack.

On September 4, 1647, Charles De Menou, Sieur d'Aulnay of Port-Royal, at that time the appointed Governor of all of Acadia, ordered the commandant of Fort Saint-Pierre to hand over the post, including all its contents. He managed to hold onto the fort until his death on May 24, 1650. At this point, the commercial rights to Cape Breton, including Fort Saint-Pierre and Fort Sainte-Anne, were leased by Nicolas Denys (a major figure in Acadian History), in partnership with his brother Simon Denys, and J. Gaudin, all heavily involved in the French Acadian trade. Nicolas Denys concentrated on Fort Saint-Pierre, while Simon Denys established himself at Fort Sainte-Anne.

Between the portage route and the fort, Nicolas Denys built a "haulover" road across the isthmus, which made it possible to transport boats between the Atlantic and Lake Bras d'Or so that the long route along the outer coast could be avoided. The road consisted of logs placed in a corduroy pattern. Rebuilt in the 19th century, it was obliterated during realignment of the canal from 1912 to 1918.

In 1651 Fort Saint-Pierre was attacked by the soldiers of d'Aulnay's widow, who took possession of the post, imprisoning Nicolas and his brother in the dungeon of her Port-Royal post. A year later, however, the post was returned to Nicolas. In the spring of 1653 the fort was again attacked, this time by d'Aulnay's creditor Emmanuel Le Borgne. The fort was ruined and two ships were destroyed. After complaints in France, Nicolas again regained ownership and presumably the fort was rebuilt, as an earth square embankment (measuring about 24 x 24 m) with one, perhaps two openings. It was covered with sod and surrounded by a ditch. In the winter of 1669, a fire broke out, and the post burnt to the ground. The site was abandoned and left intact until 1854 when construction of St. Peter's Canal began. In 1876, a house was constructed for the canal lockmaster and destroyed the northwestern corner of the fort.

Test excavations were dug in 1985 by Birgitta Wallace at the request by the Historic Sites and Monuments Board of Canada, to confirm the presence of the post and assess the significance of the archaeological remains. Remains of two buildings were uncovered. Both appear to have been rectangular and located in a north-south line in the centre of the fort. Both had walls of wattle and daub, but one appears to have been much more elaborate than the other. It had leaded windows and floors of wide, thick wood planks nailed onto joists laid across a footing of large stones placed about 25 cm apart. The size of the building could not be determined because of the limited excavation, but the excavation touched on at least two rooms. Each had a chimney set into the wall, with the hearth extending into the room.

The artifacts from the structure indicate an opulent life style on the part of the residents, with highly decorated, relief-moulded polychrome plates, chafing dishes to keep food warm, and various types of tin-glazed earthenwares, including "ointment pots" and a drug jar marked with a Jesuit cross and the letters IHS. Pieces of plaster mouldings, perhaps from room mouldings, decorative pieces of bronze or brass, and a dagger in a leather sheath with a crossbar with brass ball finials, were also collected. There were also common coarse earthenware cups and jars as well as Rhenish stoneware, bottle glass, clay tobacco pipes, gunflints, iron kettle fragments, a coin (unidentifiable) and iron nails and bolts. Tinkling cones of rolled copper indicate trade with the Mi'kmaq as do, perhaps, fragments of copper pots. The second building was similar in construction, but possibly without the chimneys and floor. Artifacts were few and plain: bottle glass, unslipped Saintonge ceramics, gunflints and clay tobacco pipes.

A cross-section through the inland fort wall showed that it consisted of sod, containing a high proportion of clay, and that it had been about 1.5 m thick. At the time of the construction of the canal, it would have survived to a height of about 50 cm. During the digging of the basement for the lockmaster's house, a human skeleton with long hair adhering to the skull and a ring on one finger was encountered. It was said to be a female skeleton. As the fort cemetery is likely to have been outside the fort, the burial may indicate the location of the fort chapel as important persons were often buried under the chapel floor. A peterara or pierrier cannon found some time in the 19th century has been believed by some to pre-date Fort Saint-Pierre, as this type first appears in the Middle Ages. However, such cannons were still made in the 17th century, and Denys used them.

What makes the physical remnants of Fort Saint-Pierre so important is that the fort was destroyed by fire overnight, leaving its vestiges in place where they fell that night. The material is also well preserved because the site is water-logged, preserving organic materials. The heritage significance of Fort Saint-Pierre was recognized in 1929, as part of the National Historic Site designation of St. Peters.