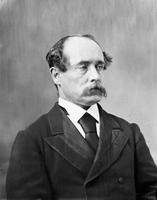 George Anthony Walkem, lawyer, judge, politician, premier of BC 1874-76; 1878-82 (b at Newry, Ire 15 Nov 1834; d at Victoria 13 Jan 1908). Educated as a lawyer in the Province of Canada, Walkem moved to BC in 1862, but was unable to practice until Chief Justice Matthew Begbie allowed colonial lawyers admission to the BC bar. In addition to his law practice, Walkem took an interest in politics. He was a member of the colonial Legislative Council (1864-70) in MCREIGHT's administration and, after 1871, sat in the provincial legislature.

Associated with Amor DE COSMOS in the Confederation League before BC joined CONFEDERATION, George Walkem became attorney general in De Cosmos's Cabinet and succeeded him as premier on 11 Feb 1874. Following a vote of non-confidence on financial matters, Walkem was replaced as premier by Andrew Charles ELLIOTT, but was elected to a second term as premier on 25 Jun 1878. The 2 Walkem administrations were dominated by the struggle with Ottawa over the failure to begin the Pacific railway in the time set out in the Terms of Union. Walkem led the fight with vigour but with an irascibility that forfeited him community support once construction of the CPR began. He ended his career as a justice of the Supreme Court of British Columbia (1882-1903), a position in which, in contrast to his political career, he was well respected and greatly admired.