The Wendat (also known as the Huron) occupied the Credit River valley — extending from the Niagara Escarpment to Lake Ontario, and including what is now Halton Hills — for centuries. The arrival of Europeans in the 1600s brought disease, and the Wendat population was decimated through a series of epidemics. In the mid-1600s, warfare with the Haudenosaunee further dispersed the Wendat population. This left the land open to the Mississaugas, who were still present when the first European settlers arrived. In 1818, the British government negotiated a purchase (“Treaty 19”) of land from the Mississauga Nation (see Indigenous Peoples: Treaties). Lieutenant Governor Maitland named the two townships Chinguacousy and Esquesing, names used by the Mississaugas. Esquesing translates to either “Last Creek Out” or “Land of the Tall Pines.”

The area was surveyed by Loyalist Charles Kennedy and land surveyor Richard Bristol to allow settlement in 1819. Loyalist settlers were drawn to Esquesing Township because of the power of the Credit River. In 1823, George Kennedy, Charles Kennedy’s younger brother, arrived from the Niagara region and opened a mill. A family of four brothers — William, James, Joseph and Robert Barber — bought the mill and foundry in 1837 and named the settlement Georgetown. The hamlet Glen Williams, first settled in 1825 and known as Williamsburgh until 1852, also made use of the Credit River. Many local industries harnessed its power for sawmills, flourmills and hydroelectric power. The neighbouring village of Acton was also settled in 1825, although it was previously known as Danville and Adamsville after its founders. The first postmaster, Robert Swan, renamed the settlement Acton in 1844. Similarly, in Norval, the arrival of the Post Office in 1836 established its name. First settled by Loyalist James McNabb and his pioneering family in 1820, it has been suggested that the name Norval was inspired by the Scottish play “Douglas” by John Home. A line from the play reads, “My name is Norval; on the Grampian Hills.”

The Esquesing Township was incorporated under the 1849 Municipal Corporations Act. The capital was Stewarttown, though it was often referred to as Esquesing since a post office of that name was located there. Meanwhile, the rural hamlets in the surrounding area began to develop into bustling industrial hotspots.

Between 1870 and 1871, a Town Hall was built in Glen Williams. It still stands today and serves as a centre for community events and functions. In 1974, hamlets such as Glen Williams and Norval, along with Acton, Georgetown and the rest of the Esquesing Township, were absorbed into the Town of Halton Hills. Halton Hills was named after Major William Halton, secretary to the lieutenant governor of Upper Canada, Francis Gore. 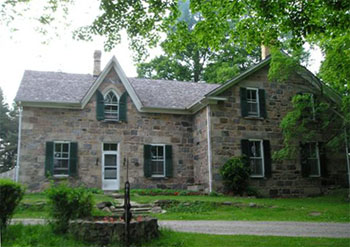 Built in circa 1870, Duff House is an example of a typical southern Ontario farmhouse.

Halton Hills, unsurprisingly, features a hilly landscape, as well as long rural stretches of farmland. It is considered one of the largest agricultural regions in the Greater Toronto Area. The Credit River, once the pioneering source of hydroelectric power, now provides a peaceful spot for outdoor activities. Halton Hills also contains part of the Niagara Escarpment, with a number of conservation areas (e.g. Credit Valley Conservation) and access to the Bruce Trail.

The Limehouse Conservation Area, nestled in the Niagara Escarpment, is home to the ruins of the old limestone kilns. The hamlet of Limehouse once boasted a prosperous lime industry, which produced 4,130 tons of goods, mainly lime and lumber, in 1876. However, after a change of ownership in 1917, the lime business ceased operation. The ruins remain a unique feature of the area. A number of tunnels and caves resulted from the rainwater’s reaction to the limestone. Once used by thieves and smugglers, they are now a place for hikers to explore.

When Acton was incorporated as a village in 1874, its population was just over 700. Georgetown, on the other hand, grew much more rapidly: the population was around 700 in 1845. By the time it was incorporated as a village in 1865 it boasted over 1,400 people, rivalling Oakville as the largest populace in Halton County. By the end of the Second World War, the population had climbed to 4,000. Georgetown experienced a second population boom as it developed into a suburban commuter town, with many residents commuting to Toronto and Milton for work. As of 2016, the overall population of Halton Hills was 61,161.

William and James Barber, James Young and Philo Dayfoot had a large impact on the economic growth of Georgetown. Dayfoot was a tanner and a boot manufacturer, and opened a retail outlet for his boots and shoes in 1869. Meanwhile, James Young was a leading merchant with his general store. He also sold insurance and served as the Reeve of Esquesing from 1851 to 1856.

While Acton was celebrated for its tanning industry, Georgetown grew into a paper town thanks to the Barber brothers, who built a stone paper mill on the Credit River in 1854. The Barber Paper Mill started to boom in the 1850s, and by 1864, it was said to be the largest wallpaper manufacturer in North America. The success of the Barber Paper Mills led to the opening of two more paper mills in 1905 and 1910. These mills were a source of economic stability and employment until the Provincial Papers (formerly the Barber Paper Mill), ceased operations in 1991.

Today, the economy of Halton Hills is based on small and medium-sized businesses.

The arrival of the Grand Trunk Railway in 1856 transformed many of Halton Hill’s rural clusters into industrial centres for business. There were stations in Acton, Georgetown and Norval, although Norval’s station was located over a mile north of the village. Georgetown grew into a railroad centre with three rail connections: Grand Trunk Railway, Hamilton and Northwestern Railway and Toronto Suburban Railway. The latter arrived in 1917, an electric radial line between Toronto and Guelph with station stops in Georgetown, Acton and Norval.

With the rise of automobiles, passenger travel declined. Many railways did not survive the Great Depression; the Toronto Suburban Railway closed in 1931 and the Acton railway station closed in 1967. Major roadways also contributed to the decline of rail services. For example, in the 1920s, provincial highway designation was given the Toronto-Guelph road (Highway 7) and to the Acton-Milton Road (Highway 25).

Today, Halton Hills is considered part of the Greater Toronto Area. It is connected to Toronto by GO Transit rail service, which stops at both Georgetown and Acton.

The formation of the Town of Halton Hills in 1974 saw many changes to the structure of the municipal government. The Civic Centre, which acts as the headquarters, opened in 1989. Halton Hills is governed by way of four wards: Wards One and Two represent the former Town of Acton and Township of Esquesing, and Wards Three and Four represent the former Town of Georgetown. Each ward elects two local councillors, and two regional councillors are elected overall. The mayor is elected by all.

The Georgetown Library also serves as the Halton Hills Cultural Centre, which houses the Helson Gallery and the John Elliott Theatre. The local theatre groups include Globe Productions and the Georgetown Little Theatre Productions.

The Esquesing Historical Society extensively documents the history of Halton Hills and the previous Esquesing Township. Organisations such as Heritage Halton Hills and the Heritage Foundation of Halton Hills work to identify and fund preservation of heritage properties. For example, the Acton Town Hall, originally opened in 1883, was no longer needed after amalgamation in 1974; however, the building was purchased and now serves as the Acton Town Hall Centre, a popular venue for community events. Similarly, in 1985, the Williams Mill in Glen Williams was purchased and converted into a studio space for artists. It is now the Williams Mill Visual Arts Centre.

Located on Draper Street in Norval, Ontario, this Victorian Manse was the home of Lucy Maud Montgomery and her family from 1926 to 1935. In 1926, Lucy Maud Montgomery (author of Anne of Green Gables), her husband and her two sons relocated from Leaskdale (north of Uxbridge, Ontario) to Norval. By then, Norval was a thriving mill town. The family moved into the Victorian Manse (built c. 1888) on Draper Street adjacent to the Gothic Presbyterian Church, where her husband, Rev. Ewan Macdonald, became minister.

Montgomery fell in love with the landscape of Norval. She was especially fond of the pines on Russell’s Hill (part of a rural property in the village) and frequently wrote about them in her journals. She documented her time in Norval extensively through journal entries and photography, which are available through the University of Guelph archives.

During the nine years she lived in Norval, she published six novels and wrote nearly three of the ten volumes of her journals. Her husband was the minister of the Norval Presbyterian Church as well as the Union Presbyterian Church outside neighbouring Glen Williams. As a minister’s wife, Montgomery was actively involved in the church and community affairs for both parishes: teaching Sunday school, hosting church socials, organizing church fundraising events and bazaars, visiting parishioners with her husband and serving on church committees. She also established the “Old Tyme Concerts,” which provided the little village and surrounding areas with local entertainment throughout the Depression. In addition, she established a drama club, putting on the plays to raise funds to refurbish some of the church interior.

To her disappointment, Montgomery and her family had to relocate once again after Ewan’s retirement in 1935. They moved to Toronto into a house that Montgomery aptly called “Journey’s End.” She passed away in 1942, followed by her husband, Ewan, in the following year.