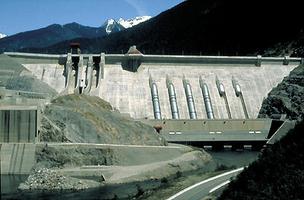 The Revelstoke Dam was built after an international agreement to make American downstream power plants more effective (courtesy BC Hydro and Power). 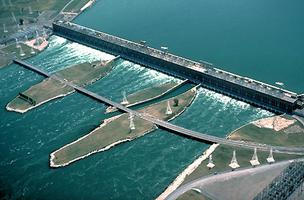 The Beauharnois Dam on the St Lawrence Seaway harnesses some of the river's enormous electric potential (photo by J.A. Kraulis). 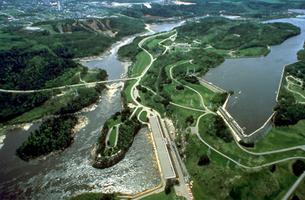 In the Saguenay-Lac-St-Jean region of Québec (courtesy Alcan Aluminum).
PreviousNext

The availability of waterpower resources depends on topography and climate. The development of such energy sources depends on the size and proximity of markets for the power, as well as the availability and price of competing energy sources such as wind and solar. The development of hydroelectric power and its share of the total electrical production in Canada varies considerably from province to province. Quebec, British Columbia, Newfoundland and Labrador and Ontario generate the majority of hydroelectric power in Canada: in 2018, Quebec generated just over 50 per cent of Canada’s hydroelectricity, British Columbia 17 per cent, and Newfoundland and Labrador and Ontario approximately 10 per cent each. With the exception of Manitoba, which in 2018 generated 9 per cent of Canada’s hydroelectricity, the remaining provinces and territories all generated less than 1 per cent.

The most practical hydroelectric sites are those located close to load centres, and Canada has developed power stations in most of these locations. However, a significant amount of hydroelectric potential remains untapped, chiefly in northern Quebec, British Columbia and the Yukon. Factors that influence the viability of technically feasible hydro sites are almost exclusively economic. Hence, the development of such sites would require a significant decline in construction and financing costs, greatly increased costs for competing energy supply from other sources, the development of markets for large amounts of power within reasonable proximity of such remote sites, or prices that would support the cost of transmission to southern markets.

The main drawbacks of conventional, large-scale hydroelectric power are the initial high capital cost, the long construction period and the environmental effects of flooding. These factors are generally considered to be offset by the long life, low operating costs and low carbon footprint of hydro facilities.

In the 1850s, North Americans exploited the energy content of moving water through the use of small-capacity waterwheels and turbines. The energy produced drove machinery, including that used in gristmills and sawmills. By the 1860s, many hundreds of turbines, with up to 1,000 horsepower (hp) capacity, were manufactured annually in the United States. By the early 1870s, the production of at least one Canadian factory was averaging about 20 turbines per year. Hydroelectricity was introduced in the 1880s, which was around the time Thomas Edison began manufacturing direct-current electric generators, allowing multiple buildings in a district to be illuminated.

The advent of electric generators spawned an increasing demand for electricity, and the need for sources of electric power — such as hydroelectricity — followed. Where waterpower was close at hand, turbines were installed for the express purpose of driving electric generators for lighting, which was initially provided during evening hours only. By the late 1880s the generation of electricity by waterpower was well established. The early use of hydroelectric generation was limited by the capacity of the generating station, which was governed by the speed and volume of its water source, or by demand for electrical power near the station. Transmitting direct-current electricity beyond a few kilometres was difficult, since the amount of electricity decreased along the way. While copper was known to transmit energy over long distances better than other types of metal conductors, its cost was prohibitively expensive.

The development of commercially viable transformers in the 1890s enabled high-voltage, alternating current transmission. Faster than direct current, alternating current permitted transmission of electric power over significant distances. This led to the development of more remote hydroelectric sites. For example, in 1896 hydroelectric power was transmitted approximately 32 km from Niagara Falls to Buffalo, New York, on an 11,000-volt line (then considered a phenomenally high level). Two years later, a 56 km, 22,400-volt line began providing Hamilton with hydro power from DeCew Falls in St. Catharines. The possibility of long-distance transmission increased the capacity of hydroelectric-generating equipment: by the early 1900s, 5,000 hp turbine-generator units were being produced. By comparison, hydroelectric turbine-generator units of over 600,000-hp capacity are now in service.

Beginning in the early 1900s, there was rapid growth in the development of hydroelectric-power sites and progressive increases in transmission-voltage levels. More remote sites were exploited and transmission lines were extended to supply the gradual but strong growth in demand for electric power. In 1903 electric power was transmitted to Montreal from a hydro station at Shawinigan, Quebec, via a 135 km long, 50,000-volt transmission line; by 1910 Ontario Hydro was transmitting hydroelectric power from Niagara Falls on a 110,000-volt line.

By 1900 a total of 133,000 kilowatts (kW) of hydroelectric-generating capacity had been installed in Canada. Most of this capacity was in Quebec and Ontario, where attractive hydroelectric-power sites were found near urban centres, though there were some smaller developments in the Maritimes, Alberta and British Columbia. In the next 10 years, major hydro-generating stations were established in all provinces except Prince Edward Island and Saskatchewan. In 1906, the Yukon Gold Company developed a hydro plant on the territory’s Little 12 Mile River. By the early 1950s, hydro facilities were serving both northern territories. Hydroelectric generation was not developed in Saskatchewan until the early 1960s, when the South Saskatchewan River Development provided control and regulation of the province’s major river system.

Growth of hydroelectric generation in Canada continued at a modest rate until the mid-1920s, followed by 10 years of more intensive development, and then at a much slower rate through the Second World War.

After 1945, there was a sharp increase in hydro- and thermal-power installations to meet the progressive growth in demand (see also Electric-Power Generation). This growth, which in some provinces exceeded 10 per cent annually, did not slacken until the mid-1970s, when the impact of the 1973 international energy crisis on economic activity led to a decline in the annual growth rate of electric-power consumption.

In the years 1920 to 1950, hydroelectric stations accounted for over 90 per cent of Canada’s total generating capacity. Hydro’s share of this capacity declined after 1950, dipping to under 60 per cent in 1976. The decline occurred because fossil-fuel-fired thermal-generating stations then offered a cost-competitive alternative, and because few good hydro sites remained near major population centres, increasing the cost of transmission. However, the cost of competing sources of electricity, principally nuclear power and thermal stations burning coal, oil and natural gas, has risen substantially since the early 1970s.

In 2018, 61 per cent of Canada’s electricity generation was from hydroelectric sources, while the remainder was generated from nuclear, natural gas, coal, wind, petroleum, and renewable sources other than hydro.