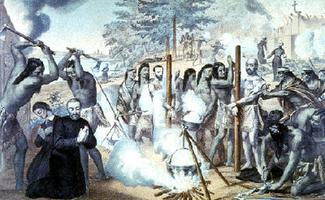 This composite view of the torture and death of the blackrobes of Huronia (Gabriel Lalemant left and Jean de Brébeuf right) in 1649 was one of the most powerful images distributed of the New World, not least for its value as propaganda (courtesy Library and Archives Canada).

Jean de Brébeuf, Jesuit missionary, author of Relations des Jésuites, 1635, 1636 (b at Condé-sur-Vire, France 25 Mar 1593; martyred at St-Ignace in Huronia 16 Mar 1649; canonized 29 June 1930). Brébeuf came to Canada in 1625 as a missionary to the nomadic Montagnais. Sent to the Huron near Georgian Bay in 1626, he learned their language and preached there until 1629, when Québec was captured by the Kirke brothers and the Jesuits were forced to return to France. He returned in 1633 and was among the Huron again in 1634, remaining in charge of the mission (see Ste Marie Among the Hurons) for 4 years.

Brébeuf, an accomplished linguist, supervised the preparation of a Huron grammar and dictionary. In 1640, following a devastating smallpox epidemic, the Huron attacked him and his companion and damaged their mission. In 1640-41 Brébeuf began a mission among the Neutral, but they regarded him as a sorcerer.

In 1644 he returned to Huronia, remaining there until 16 March 1649, when he was captured by invading Iroquois at the mission, taken to St-Ignace and brutally killed. After his death, Paul Ragueneau discovered 39 fragmentary writings in which Brébeuf described his visions, his ecstasies and prophetic dreams. His bones are buried at the Martyrs' Shrine near Midland, Ontario.