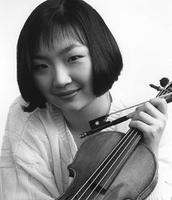 Juliette Kang, violinist (b at Edmonton, Alta 6 Sept 1975). Kang began her violin studies at age four. At nine she began studying with Dr. Jascha Brodsky at the Curtis Institute of Music, from which she earned her Bachelor's degree in 1991. In 1993 she earned her Master's degree from the Juilliard School, where her teachers included Dorothy Delay, Hyo Kang and Robert Mann. She came to international attention as winner of first prize in both the Yehudi Menuhin and Indianapolis International competitions and is also a Young Concert Artists winner.

Kang's recording debut, which included the premiere recording of Lutoslawski's Subito, was issued to rapturous acclaim in February 1995 and was followed by a CD of her March 1996 Carnegie Hall recital. Her recording of the Wienawski Second Violin Concerto and the Schumann Violin Concerto with Sergiu Comissiona and the Vancouver Symphony for CBC was released in 2000.

Juliette Kang was principal second violin with the Kennedy Center Opera Orchestra during the 1999-2000 season and was a member of the first violin section of the Metropolitan Opera Orchestra from 2001 to 2003. She held the position of Assistant Concertmaster of the Boston Symphony (2005-2006) before becoming First Associate Concertmaster with the Philadelphia Orchestra.