Raymond Collishaw was born in Nanaimo, British Columbia, on 22 November 1893. His parents, Jack and Sadie (née Jones), were from Wales, and met in Oakland, California. Jack was a miner and prospector, and they settled in the coal region of Nanaimo. Raymond was the first of four brothers and two sisters. Jack was described as a “dreamer with a restless nature” who did the “gold miner’s grand tour.” However, he spent more time looking for gold than finding it. Sadie was left behind in Nanaimo to mind the family. One biographer, Allan Snowie, observed that Raymond “inherits both his mother’s sense of responsibility and his father’s spirit of adventure.”

In 1908, Collishaw joined the Canadian Fisheries Protection Service (see Naval Service Act). He started as a cabin boy on the CGS Alcedo and over the next seven years he rose through the ranks to become a first officer and mate. He was promised a command in late 1914, but Collishaw felt the lure of the First World War and attempted to join the Royal Canadian Navy. Receiving no reply, he applied to the Royal Naval Air Service (RNAS) in early 1915, having been entranced by a flying show on Lulu Island near Vancouver before the war.

He passed interviews in Esquimalt, BC, and then in Ottawa with Vice-Admiral Charles Kingsmill, the head of the Royal Canadian Navy. Collishaw was told by Kingsmill that based on his service reports and interviews, he was accepted as a probationary flight sub-lieutenant. Collishaw went to Toronto to get his pilot’s certificate at the Curtiss Flying School but a large backlog of students delayed this. Eventually, he was sent to Halifax for training aboard HMCS Niobe.

On 12 January 1916, Collishaw left New York City for England on the SS Adriatic. He first trained at Redcar and made his first flight on 10 February. He flew solo four months later. Like many early aviators, Collishaw was lucky to survive his training. The primitive aircraft were unreliable and mechanical failures were frequent. His flying logbook reveals numerous forced landings resulting from engine stoppages. He was awarded his pilot’s certificate after 33 hours of solo flight. His first posting in France was flying the Sopwith 1½ Strutter with No. 3 (Naval) Wing. In late January 1917, he joined No. 3 (Naval) Squadron. Major Bertram Bell recognized Collishaw as “one of the most promising boys in the squadron” when he first encountered the “round, red-faced boy sitting in one corner” of the mess. 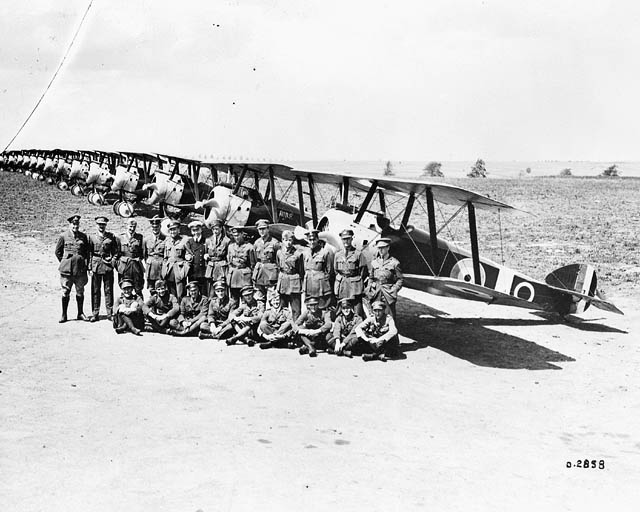 Raymond Collishaw and pilots with Sopwith F. 1 Camel aircraft of No. 203 Squadron, RAF on the occasion of an inspection by King George V, Izel-le-Hameau, France, 12 July 1918.

When Bell took command of No. 10 Squadron RNAS, he brought Collishaw along as the commander of “B” Flight. This was the famous “Black Flight,” made up entirely of Canadians flying the Sopwith triplane. Collishaw’s aircraft was dubbed “Black Maria,” and the other aircraft of the flight were known as “Black Death,” “Black Prince,” “Black Roger” and “Black Sheep.” This unit was one of the most successful fighting groups of the war, claiming 87 enemy aircraft between May and July 1917. Collishaw alone accounted for 27 aircraft during this period and was awarded the Distinguished Service Cross and Distinguished Service Order for his accomplishments.

Following a three-month leave, Collishaw was posted to the Seaplane Defence Squadron, flying Sopwith Camels near Dunkirk. He was promoted to command this unit, redesignated No. 13 (Naval) Squadron, when its commanding officer was injured in a crash. In late January 1918, Collishaw was promoted to squadron leader and given command of his old squadron, Naval Three. This unit, also equipped with Sopwith Camels, was very active during Collishaw’s time as commander, especially during the 1918 German offensive of March–April, and the resulting Allied counteroffensive, “the Last Hundred Days ” (see also Canada’s Hundred Days). No. 203 Squadron (formerly No. 3 Naval Squadron) was credited with downing 125 aircraft while losing only 30 of its own pilots, an indication of Collishaw’s skill and leadership abilities. 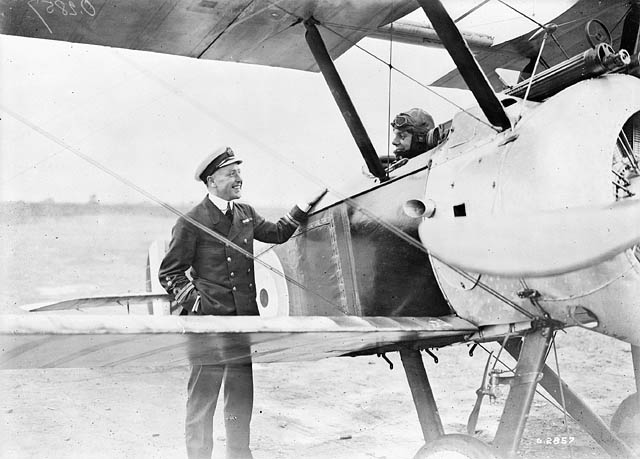 Collishaw emerged from the First World War as one of the foremost aces of the conflict. His ability in aerial fighting was unquestioned and he had proven himself an effective leader at the flight and squadron level. The traditional narrative of Collishaw’s career emphasizes his skill in aerial combat as well as his leadership abilities. Less understood is Collishaw’s familiarity with ground support operations. Low-level attacks in support of the army were a major part of the RAF contribution to victory, and Collishaw was one of the earliest practitioners of this hazardous mission. He drew lessons from this experience that served him well later in his career.

(See also The Great War in the Air.)

In 1919, Collishaw was one of the select officers offered a permanent commission in the Royal Air Force (born of the union of the Royal Flying Corps and RNAS on 1 April 1918). His eventful interwar period began with a deployment to the Crimea to fight the Bolsheviks in the Russian Civil War. This conflict was very different from the Western Front. Commanding No. 47 Squadron, Collishaw faced a new series of challenges related to the vast distances and general isolation of the Russian theatre of operations.

In a subsequent deployment to Mesopotamia (present-day Iran and Iraq), Collishaw was given his first significant non-flying posting and was exposed to Army procedures and culture. He was issued a horse and accompanied an army expedition as the RAF liaison officer. These experiences were significant in Collishaw’s development as a senior commander.

Collishaw’s transition from an active operational career to that of a senior officer started with his attendance at the RAF Staff College in 1924–25. There he learned the doctrinal and academic foundations of the Royal Air Force. His maturation as a commander culminated with his deployment to Sudan as the senior RAF officer during the Abyssinian Crisis of 1935. In between, he spent three years commanding the RAF contingent on board the Royal Navy aircraft carrier HMS Courageous.

Collishaw was no longer the brash, adventurous fighter pilot of 1917, but a mature, senior officer with a wide range of operational and command experience. His close work with the Army and the Navy gave him a keen understanding of the challenges faced by the other services. His extensive time deployed in Russia, the Middle East and Africa allowed him to understand the problems of sustaining a campaign far from home.

At the start of the Second World War, Collishaw was the senior RAF operational commander in Egypt and the Western Desert. British numerical and qualitative inferiority forced them to adopt a cautious approach in dealing with Italian ambitions in Africa. Collishaw used his meagre forces to harass the Italians, but he carefully avoided wastage that could fatally weaken British strength in the Western Desert. Though criticized by some (including Air Marshal Arthur Tedder) for acting rashly, the RAF operations directed by Collishaw achieved a success out of all proportion to the size of his force. As a result, he was considered indispensable by his commander, Air Chief Marshal Sir Arthur Longmore.

Operation Compass, launched on 9 December 1940, was an unexpected success. The Italian army was routed, and Collishaw’s squadrons played a significant role, allowing an exhausted and overextended British army to continue its advance.

The arrival of the Germans (under General Erwin Rommel) in April 1941, combined with major defeats in Greece and Crete, turned the tide against the British. Operation Battleaxe in June 1941 was a significant British failure that exposed cracks in the army–RAF air support system in the Middle East. British Prime Minister Winston Churchill recognised both the problem and the solution. He instituted high-level changes to facilitate a better working relationship between the two services. This new dynamic would serve as the basis for Allied tactical air doctrine for the remainder of the war. Collishaw made a significant contribution to the development of Allied tactical air power doctrine. His ideas on the role of the RAF in the land battle were not unique, but he proved them in action. As a result, his principles were endorsed and enshrined by Churchill.

Despite his success during the earlier phases in the war, Collishaw was dismissed by Tedder in July 1941. He was shipped back to the United Kingdom for a series of minor postings. Collishaw first served as duty air commodore at HQ Fighter Command from August 1941 to March 1942. He was promoted to air vice-marshal on 21 March 1942 and given command of 14 Group, which was responsible for air defense of Scotland, including protection of the Royal Navy base at Scapa Flow. Collishaw left the RAF on 15 July 1943, when 14 Group was disbanded. The reasons for his retirement aren’t clear, but it seems that it was not a willing departure. In his memoirs, Collishaw only remarked that, “I was retired.” He was not yet 50 years old, but he was leaving the service in the middle of the war. It is possible that health issues, which kept him in hospital for nearly two months earlier in the year, had forced his retirement for medical reasons. Following his retirement, he served as a regional air liaison officer with the British Civil Defence Service until the end of the war.

In 1945, Collishaw returned to Canada to live with his family, including his wife, Neita (née Trapp), and daughters Felicity and Mary. He followed in his father’s footsteps and embarked on a very successful second career in the mining industry. In his spare time, Collishaw became a historian of the First World War in the air and spent a considerable amount of time and effort creating pilot rosters, ace lists, and unravelling mysteries such as who shot down German aces Manfred von Richthofen (known as the “Red Baron”) and Karl Allmenröder. He corresponded extensively with fellow pilots and other historians of the First World War. Notwithstanding his health problems in 1943, Collishaw lived a long and productive life. He died in West Vancouver, British Columbia, on 28 September 1976.

In his memoirs, Collishaw stated, “I feel that my days of command in North Africa, when we had to depend upon superior strategy, deception and fighting spirit, faced with a numerically superior enemy, represent by far my best effort. Yet if I am known at all to any of my fellow Canadians it is through more carefree days, when as a fighter pilot, with the limited responsibilities of a flight commander in a squadron over France, I had the good fortune to shoot down the enemy without in turn being killed.”