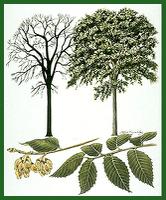 White elm may reach imposing heights and are characterized by an umbrella-shaped crown (artwork by Claire Tremblay).

Elm (Ulmus), genus of trees of elm family (Ulmaceae), found only in temperate regions of the Northern Hemisphere. Twenty-five species occur worldwide; 3 are native to Canada. White elm occurs as far west as central Saskatchewan; rock and slippery elms are restricted to parts of extreme southwestern Ontario and southeastern Québec. Elms, especially white or American elm, may reach imposing heights and are characterized by an umbrella-shaped crown. Leaves are simple, short-stalked, oval (slightly asymmetrical at base) and veined, and have teeth of 2 sizes along the margin. They alternate along the twig. The flat, winged fruit develops in very early spring. Elms can grow in various habitats but are usually found in wet, fertile ones (eg, alluvial flats). The very hard wood is used for specialized items, eg, for hockey sticks, and for piano bodies, caskets and furniture. Elms are often planted as ornamentals but many have died from Dutch elm disease.