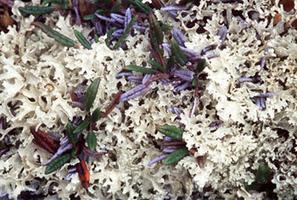 Lichen, a dual organism composed of fungi living in close association with green algae or Cyanobacteria. As composite organisms, they cannot be formally classified within a single kingdom. Names applied to lichens are actually those of the fungal component of the association because, with few exceptions, each recognizable lichen is the product of a different species of "lichen fungus." However, the algal species involved in the lichen consortium might be found in a number of different lichens.

The more conspicuous lichens are foliose, lobed or leafy with distinct upper and lower surfaces; or fruticose, hanging like black or yellow hair from trees or shrubby and erect on the ground. Crustose lichens form a thin crust over rocks or bark and are conspicuous only if brightly coloured. A typical foliose lichen has a complex organization. The algal cells form a layer within the fungal body, just below a protective cortex of thick-walled fungal cells and above a loosely organized layer of thin-walled cells (medulla). Below the medulla is another protective cortex from which rootlike attachments (rhizines) often arise. Crustose and fruticose lichens have slightly different tissue relationships as well.

Lichens grow extremely slowly (about 0.1 mm per year in some arctic species, 5-8 mm per year in temperate species). Estimating the growth rate of a lichen and measuring its diameter shows that some patches of rock-dwelling crustose lichens in the far north may be several thousand years old. Lichens are found from the tropics to the tundra and grow on many kinds of materials or substrates. There are approximately 15 000 species worldwide, with perhaps 2500 found in Canada.

They are most conspicuous in cooler regions: on exposed mountaintops, in northern coniferous forests and on arctic tundra. In the subalpine forests of the western mountains and in some boreal forests, lichens often profusely adorn the branches of spruce and fir. The caribou lichens blanket the ground over thousands of square hectares in Canada's subarctic woodland.

Across the prairies and in the dry interior of BC, brilliantly coloured species invade exposed soil and cover erratic boulders. In eastern Canada, lichens are especially conspicuous on tree trunks, particularly those of roadside elms and maples. On thin or sandy soil, large mixed colonies of fruticose lichens often develop. Some lichens, restricted to coastal rocks, decorate the sea-splashed outcrops with orange, white and black belts reflecting the specificity of certain species to different tidal and splash zones.

Lichens are of great importance in Canada because of their relative abundance in the north. They make up the greater part of the winter diet of barren-ground caribou and are essential for the survival of the herds which form the most important element in the life of many aboriginal and Inuit groups. Lichens have little nutritive value and are generally used only as an emergency food, although some native peoples of interior BC include in their diet species such as the black, hairlike tree lichen.

Bark- and twig-inhabiting lichens are extremely sensitive to air pollution. Studies have been made in Canada and elsewhere of the relationship between specific levels of pollutants (especially sulphur dioxide) and the distribution and growth of lichens. Hence, lichens are frequently used in biological estimations of pollution levels and as early indicators of pollution problems. Many lichens can produce unique organic compounds that have been used as antibiotics (eg, usnic acid), dyes (eg, orchil or litmus) and perfume fixatives. 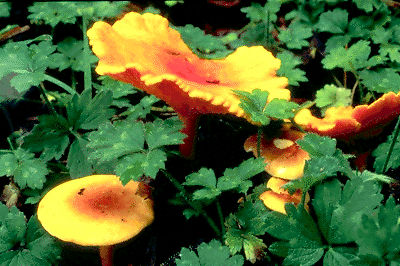