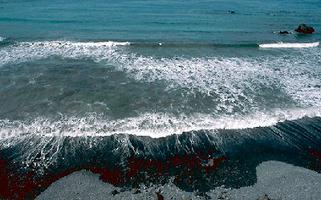 Ocean Wave Energy is undoubtedly the most visible of the various forms of energy present in the world's water bodies. The sight of waves breaking on a beach or against a cliff at any of Canada's thousands of kilometres of marine or freshwater shoreline appears to give rise in many people to a desire to invent a device to harness this seemingly abundant source of energy. Extensive wave-recording programs have defined the annual average levels of ocean wave energy in deep water, just off the Continental Shelf, at about 80 kW/m (kilowatts per metre) of wave front on Canada's Atlantic coast, and at about 100 kW/m on the Pacific coast. Closer to shore, where it would be more practical to exploit this potential source of renewable energy, the annual averages are substantially lower, about 20 kW/m for both coasts. In the Great Lakes and the Arctic Ocean, levels of wave energy are even lower and, during the winter months, ice eliminates it altogether. The averages for the open-water season in the Great Lakes is about 3-5 kW/m.

Despite the relatively high averages of wave energy along the east and west coasts, commercial exploitation of this energy source has not been economically practical so far. The actual level of wave energy can vary by up to 3 orders of magnitude during any one year.

During most of the summer, the level of wave energy will be less than 5 kW/m, but during a severe winter storm the level can easily exceed 1000 kW/m. This variance makes it very difficult to design an efficient extractor capable of withstanding winter storms and equally capable of extracting energy at a much reduced level of wave activity - a difficulty which has often been underestimated. Hundreds of patents of wave-energy extractors have been claimed over the last 100 years, but none has reached the commercial development stage.

Between 1976 and 1979 Canada joined the UK, US, Ireland and Japan in the Kaimei project, a full-scale wave-energy project off the coast of Japan, under the auspices of the International Energy Agency. The study confirmed a relatively low efficiency of the energy extractor and a high price per kilowatt hour. In Canada, many other sources of renewable energy are available to produce energy at a lower price.