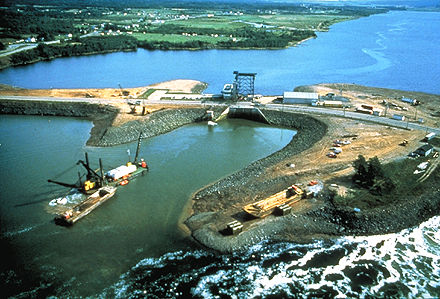 Tidal energy is a largely untapped, renewable energy source based largely on lunar gravitation. While the potential of tidal hydroelectricity has long been recognized, compared to river dams, tidal power projects are expensive because massive structures must be built in difficult saltwater environments. North America’s only tidal energy plant is located at Annapolis Royal, Nova Scotia. With the world’s highest tides occurring in the Bay of Fundy, there is additional opportunity for large-scale tidal energy projects in Canada.

One of the most practical ways to harness tidal energy is still the old tide mill concept: closing off an estuary or tidal basin from the sea with a structure composed of a powerhouse, a sluiceway and a solid embankment section. The sluiceways, artificial channels with gates, close at high tide and the ebbing sea level causes a differential head between the basin level and the sea. When this difference becomes large enough, flow is allowed through the tidal generators until the difference in levels becomes too low to drive the turbines. When the tide begins to turn and the sea level rises, the sluiceways are opened once more, so that the tidal basin can be filled for the next cycle of electrical generation. These cycles take place about twice a day (two flood tides and two ebb tides during each lunar day). Using new technology, turbines can be built to generate electricity in both directions, and also to operate as pumps in both directions.

Large, modern power systems can readily absorb the intermittent output of a tidal plant. The output from conventional fossil-fueled generating stations can be reduced when the tidal plant begins generation, and it can be brought back into the system during the few hours that a tidal plant must remain idle. This reduces the amount of coal and oil used, and substantially reduces the production of their associated pollutants.

The relatively low head of water above the turbines restricts the capacity of individual generators to about 25-50 megawatts (MW). Because of this, many machines are needed to produce a significant block of power. The machinery also must withstand the rigours of saltwater operation.

For all this investment, the average electric power output is severely limited by the twice-daily ebb and flow of tides. The average output of tidal electricity is less than 40 percent of the installed generating capacity. For comparison, production of power from river dams typically averages 70-100 percent of installed capacity. Finally, the lunar cycle of 24 hours 50 minutes means the raw production of tidal energy moves in and out of sync with the normal, solar-oriented daily pattern of electrical consumption. Unlike the energy from river dams, the daily, monthly and annual availability of tidal energy is fully predictable, but it must either be stored or integrated with other sources of energy production that can be adjusted to accommodate the fluctuations of tidal generation.

There are relatively few coastal locations in the world where the tidal range (i.e., the difference between high and low tides) is large enough to justify exploitation of the available tidal energy. There must be a sufficiently high tidal range (at least 5 m) for construction of an economically feasible plant. The site should also include a natural bay which can store a large volume of seawater at high tide, and be situated within an estuary such that the operation of the plant will not significantly change the tidal resonance (see tide).

The world's highest tides occur in the upper reaches of the Bay of Fundy, where tidal ranges over 16m are not uncommon. Ungava Bay, on the east coast of Canada, and estuaries along the coast of British Columbia also exhibit fairly high tidal ranges. The largest tidal energy site in operation in the world is the Sihwa Lake Tidal Power Station in South Korea. Other large tidal power plants are located on the Rance River in France and the White Sea in Russia. The coasts of Argentina, North West Australia, Brazil, India, Korea, the United Kingdom, and the American states of Maine and Alaska also have coastal configurations and sufficient tidal ranges to potentially provide large sources of tidal energy. The aggregate total potential global tidal energy production is 450 billion kilowatts (kW). Canada generated an estimated 580 billion kilowatt hours (kWh) of electricity in 2010. The country's potential tidal energy production is more than 42 million kW.

The idea of exploiting the energy of the tides is not new. Tidal mills were built in Britain, France and Spain as early as the twelfth century. A mill powered partially by tidal energy was built at Port-Royal, Nova Scotia in 1607. These early mills extracted the equivalent of 20-75 kW, enough to power 10 modern homes. A few of the early mills are now preserved as historic sites.

Annapolis Royal, Nova Scotia is home to the only tidal power plant in North America. The Nova Scotia Tidal Generating Station began operation in 1984, and was built at the mouth of the Annapolis River. The project was undertaken primarily to demonstrate the application of a particular type of turbine generator (trade-name, Straflo) for tidal and other low-head hydro applications. The Straflo machine differs from the conventional hydroelectric turbine-generator installation in that the turbine and generator are integrated rather than separate units. The average tidal range in the Annapolis Basin is only about 6.4 m, but the plant, in which only one large turbine (7.6 m diameter) is installed, produces about 80-100 megawatt hours (MWh) annually for Nova Scotia’s electrical utility system.

Not far from Annapolis Royal is the Bay of Fundy, which could potentially produce up to 50,000 MW of energy. Detailed studies of the Bay of Fundy tidal power resource concluded that the most efficient development scheme would be one that would generate that power over a period of about five hours, twice daily, on the ebb tide. The most cost-effective project was found to be a site in the Minas Basin, at the mouth of Cobequid Bay in the upper reaches of the Bay of Fundy (where the mean tides are 14.5 m). The site at the Minas Passage, which will be ready for deployment in 2015, has the potential to produce more than 7,000 MW. Capital costs for initiating tidal energy projects can be massive as well as difficult to calculate due to the sector's newness and need for technological innovation.

A more modest alternative project has been proposed at a site in the Cumberland Basin, a site intersected by the New Brunswick-Nova Scotia border. The site is expected to generate approximately 1,400 MW, about one-quarter the capacity of the larger site. While it is forecasted that local Maritime power systems would be able to absorb Cumberland Basin’s output, the huge capital investment required, even for this smaller project, makes the financial considerations discouraging.