This article was originally published in Maclean's magazine on 14 April 1997.

Maud Lewis lived a life that few would envy. Born in rural Nova Scotia in 1903, Lewis suffered from a series of birth defects that left her fingers painfully deformed, her shoulders hunched and her chin pressed into her chest. She spent most of her adult life as a virtual recluse in a cramped one-room house that had no running water or electricity. For more than three decades, the diminutive Lewis eked out a living rendering colorful oil paintings on the most primitive of surfaces — including particleboard, cardboard and wallpaper — which she sold for a few dollars each. Her miserly husband, Everett, often squirrelled away her slim profits, hiding the cash under the floorboards or in jars buried in the garden. At the age of 67, Lewis — who had suffered lung damage due to constant exposure to paint fumes and wood smoke — contracted pneumonia and died in hospital. She was buried in a child's coffin and laid to rest in a pauper's grave.

The tragic circumstances of Lewis’s life do not, however, tell the whole story. Though painfully shy, Lewis had by all accounts a sweet disposition and a smile that charmed everyone who visited her brightly decorated home in the village of Marshalltown, on Nova Scotia's northwestern shore. More to the point, she left behind hundreds of exuberant paintings and artifacts that, since her death in 1970, have turned her into an icon of the so-called folk art movement — Canada's own Grandma Moses. About 200 of her works — playfully depicting oxen, horse-drawn sleigh rides and other scenes of rural life — form the nucleus of an exhibition that begins an 18-month national tour after wrapping up a hugely successful 11-week run at the Art Gallery of Nova Scotia on 13 April. In her home province, the retrospective is part of a Maud mania that in the past year has spawned a book on her life and art, a successful bid to restore her original home, and even a line of Maud merchandise — coffee cups, aprons, hasty notes and the like, all bearing her images. “People are intrigued by her because she created these beautiful, joyful paintings in spite of the adversities she faced,” says Bernard Riordon, director of the Art Gallery of Nova Scotia. “It's an example of the triumph of the human spirit.”

The cheerfulness of Lewis's art — often described as childlike but in fact deceptively sophisticated in composition and observation of everyday life — is a key part of its appeal. It is also undeniably nostalgic, evoking the simple pleasures of rural Nova Scotia shortly after the turn of the century. And that is no accident, according to Lance Woolaver, author of The Illuminated Life of Maud Lewis, which was published recently. Woolaver — who grew up near the Lewis home in Marshalltown and whose father was one of the artist’s earliest patrons — says that Lewis’s paintings are, for the most part, a string of remembrances from the years she spent in Yarmouth County, 90 km south of Marshalltown, in the loving care of her parents, Jack and Agnes Dowley. It was, asserts Woolaver, “probably the last time she was truly happy.”

Lewis received her first art lessons from her mother, who taught her to hand-paint Christmas cards, which they then sold to neighbors. She also learned how to play piano, a pastime she enjoyed until her fingers became further ravaged by arthritis. Her physical deformities brought her some early grief: classmates teased her mercilessly, which may be one reason why she dropped out of school at 14, having completed only Grade 5. But it wasn't until both her parents died in the late 1930s that her life took a tragic turn. Her older brother, Charles, claimed the family inheritance and made no provision for his only sibling. About the same time, Lewis bore a child out of wedlock. The baby girl was put up for adoption and never saw her natural mother again. 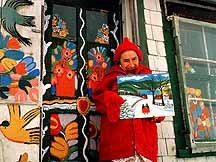 Maud Lewis in front of her house.

In 1938, the artist married Everett Lewis, a fish peddler, after responding to his ad for a housekeeper. She moved into Everett’s tiny cottage in Marshalltown and proceeded to paint every available surface — including the stove, washbasin and windowpanes — with brightly colored flowers, birds and butterflies. As it turned out, advancing arthritis prevented Lewis from keeping house. Instead, she spent each day perched on a chair beside the front window, which provided the only available light for painting as well as a glimpse of the outside world. Everett — whose stinginess extended to removing the radio batteries so that Lewis couldn't run them down by listening to music — scrounged up most of her paint supplies, including leftover house and boat paints. He also haggled with customers — most of them passing tourists — over the price of her paintings, which never went for more than $10 during her lifetime.

Lewis worked in relative obscurity until 1965, when she became the subject of a nationally broadcast CBC documentary. That same year the Toronto Star published an article featuring photos by Halifax-based Bob Brooks. His evocative images — the only professional shoot of the Lewises — now form an essential part of both the travelling exhibit and Woolaver’s compelling biography. The publicity brought a flood of requests for Lewis’s work during the last years of her life. Her most prominent customer: the Richard Nixon White House, which, through aide John Whitaker, commissioned two paintings. Unimpressed with — or unaware of — whom she was dealing with, Lewis agreed to do the pieces as long as she was paid up front. 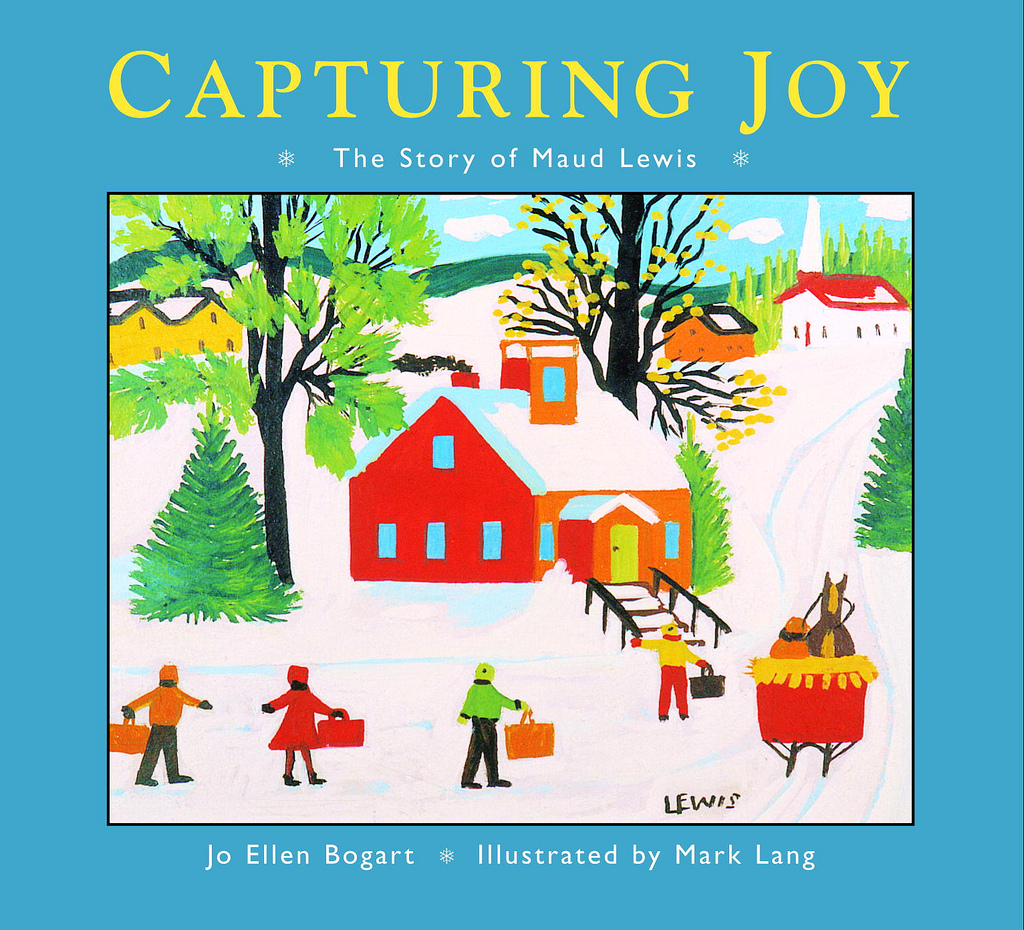 Following her death, several people, including the crafty Everett, produced forgeries of Lewis’s work. In sifting through hundreds of potential entries for the exhibit, Riordon rejected dozens of them as likely fakes. Still, at least two slipped through: a pair of hand-painted scallop shells that Riordon now believes to be the handiwork of Everett, who outlived Lewis by nine years.

One reason for the high number of Lewis forgeries is the increased demand for her art since her death. These days, even a small Lewis original can sell for up to $2,000. In Nova Scotia, a province that has a long history of producing eccentric, self-taught artists, she is already a legend. The Art Gallery of Nova Scotia drew a record 15,000 visitors to the exhibit, and its gift shop has sold some $100,000 worth of Maud memorabilia. Riordon predicts a similar response as the show travels across the country, starting on 5 June at the Canadian Museum of Civilization (now the Canadian Museum of History) in Hull, Québec. “I think it will bring joy to people,” he says, “and that they will go away feeling a great deal of satisfaction in the value of simple things.” For Lewis, at least, revelling in the simple things of life was a source of both comfort and art.