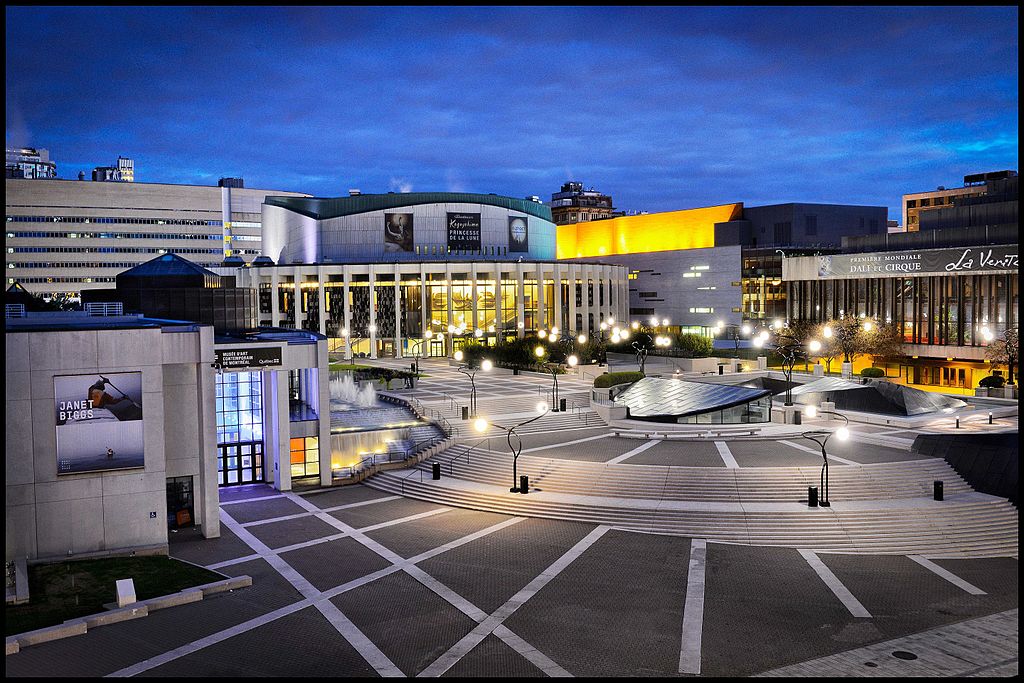 Place des Arts (PDA). Montreal performing arts complex. One of Canada's largest multidisciplinary arts complexes, it grew from three halls in the 1960s, to four in the 1970s, and five in the 1990s. With the integration of the Musée d'art contemporain de Montréal (1992), the PDA become a major North American integrated centre for both the visual and performing arts. In 2011, a sixth hall the Mason Symphonique, opened its doors. The complex also houses, rehearsal halls, boutiques, underground parking, theatre storage facilities, restaurants, and office space.

It was on the initiative of Jean Drapeau, mayor of Montreal, that some citizens conferred in 1955 to plan an organization bearing the name Centre Sir-George-Étienne-Cartier, which eventually became the PDA. The plans by Montreal architects Affleck, Desbarats, Dimakopoulos, Lebensold, Michaud and Sise were unveiled in 1959. Work began 11 Feb 1961. The Grande Salle, renamed Salle Wilfrid-Pelletier on 13 Jun 1966, was inaugurated on 21 Sep 1963 with an MSO concert conducted jointly by Wilfrid Pelletier and Zubin Mehta. In 1964 the Centre Sir-Georges-Étienne-Cartier corporation was dissolved and replaced by the Régie de la PDA which, following the reform of the municipal tax system in 1982, became the Société de la Place des arts de Montréal. The Société has reported to the Minister of Cultural Affairs of Quebec (renamed Minister of Culture, Communications and the Status of Women), with Place des Arts functioning as a provincial crown corporation. Administration has been handled through a government-appointed board of directors, and operating costs partially subsidized by the Quebec government.

The Salle Wilfrid-Pelletier, with 2960 seats, is the largest hall in the PDA. The stage, 47 by 17 m, is suitable for orchestral concerts, operas, ballets, musicals, and variety shows, including circuses. The pit is adjustable and can hold up to 100 musicians. The hall has 5 foyers, of which the Piano nobile, the central main lobby, is enhanced by Les Anges radieux, the work of the Quebec sculptor Louis Archambault.

The advent of Expo 67, with its attendant World Festival, hastened the construction of a second building, inaugurated in 1967, which housed the Théâtre Maisonneuve, the Théâtre Jean-Duceppe (Théâtre Port-Royal until 1991), and the Studio-théâtre (originally named Théâtre du Café de la Place). It was designed by Montreal architects David, Barott and Boulva, and is located to the south-west of the Salle Wilfrid-Pelletier.

The Théâtre Maisonneuve, which occupies the upper part, is a modern version of a theatre in the Italian style, and can accommodate 1441 spectators. The stage measures 46 by 21 m and can be used for dance, plays, musicals, or concerts and film screenings. The pit holds 45 instrumentalists. The Théâtre Jean-Duceppe has 747 seats, which are tiered in the orchestra to give a good view over an exceptionally large stage, 42 by 17 m. Although principally designed for theatre, this hall has an orchestra pit that can hold 10 musicians.

Inaugurated 6 Nov 1978, and designed by architects David, Barott and Clève, the Studio-théâtre holds 124 seats, making this hall an intimate space for theatre and vocal recitals.

The Cinquième salle, which can seat between 286 and 413, designed by architects Jodoin, Lamarre, and Pratte, was inaugurated 29 May 1992. Designed as a multi-purpose venue, the Cinquième salle functions as part of the Musée d'art contemporain de Montréal, and caters to film, vocal and dance performances, literary readings, lectures, and live theatre. The hall has a flexible design, enabling the seating configuration to be altered according to the needs of the performance.

The 2,100-seat Maison Symphonique de Montréal, the newest addition to PDA, is located at the corner of de Maisonneuve Blvd. and St. Urbain St. Campaigns for a new concert hall for the MSO began in 2002. Despite initial setbacks, in 2006 Jean Charest assured that the hall would be built under his government. By March 2009, construction plans for the $266-million hall were underway, with architects Diamond and Schmitt and acousticians Artec Consultants commissioned for the design. The hall is equipped to handle both orchestra and chamber performances, delivering the natural resonance, dynamic flexibility, and intimacy not achieved by the Salle Wilfid-Pelletier. The Maison Symphonique opened 7 Sep 2011 with a televised concert of the MSO, the MSO Chorus, and the Tafelmusik Chamber Chorus under Kent Nagano. On the program were Beethoven's Symphony No. 9; Gilles Tremblay's Envol: Alléluia, for solo flute; Claude Vivier's Jesus erbarme dich, for a capella choir; and the specially commissioned Qu'un cri élève nos chants!, by Julien Bilodeau.

The Esplanade, a large outdoor area dividing the concert halls, has been the location of festivals and art exhibitions.

Following the publication of Placedart which issued 37 numbers from 1968 to 1975, the Société has distributed Le Magazine de la Place des Arts (1989-) to audience members. Published five times per year, it contains concert programs as well as monthly calendars of artistic activities.