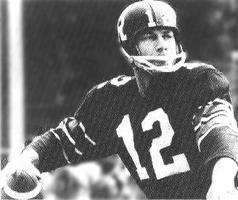 Jackson was the premier Canadian-born quarterback ever to play in the CFL (courtesy Canada's Sports Hall of Fame).

Russell Stanley Jackson, Russ, football player (b at Hamilton, Ont 28 July 1936). Jackson was prominent in baseball, hockey, basketball and FOOTBALL as a youth. After graduation from McMaster, he refused to allow his name to stand as one of that university's Rhodes scholarship candidates and went on to play football with the OTTAWA ROUGH RIDERS as a defensive back and quarterback (1958), becoming the starting quarterback after the 1962 season.

A poised passer, strong runner and capable leader, Jackson finished his 12-year career with 1341 completed passes (53%) for 23 341 yards and 184 touchdowns; he also rushed for 5045 yards while scoring 55 touchdowns and 330 points. In his last season, 1969, he led Ottawa to a Grey Cup championship. He won numerous awards, including the Schenley as outstanding player (3 times), and was twice chosen Canada's male athlete of the year.

A 1979 US survey of all professional football rated Jackson as the finest of all time. He always combined teaching with football, except for his term as head coach of the TORONTO ARGONAUTS (1975-76), and he went on to become a high-school principal. Jackson has been a member of the Order of Canada since 1969.