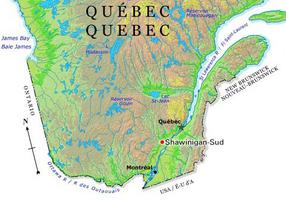 The name Shawinigan, of Algonquin origin, means "portage on the crest." This refers to the crest of rocks that had to be climbed in order to portage around the majestic waterfall.

The walls of Notre-Dame-de-la-Présentation Roman Catholic church are entirely covered by the frescoes of painter Ozias LEDUC. The church grounds overlook Shawinigan and the river valley. Promenade du capitaine runs along the river's edge.