Teacher's Cove is one of the largest of nearly 100 prehistoric sites discovered in southern New Brunswick's Passamaquoddy Bay region. An extensive shell-midden deposit represents over 2000 years of human habitation. The site was inhabited at different times in the past, both year-round and as a seasonal camp. A distinctive feature was the use of semisubterranean houses about 2000 years ago. In later times, the wigwam became the major house type. Teacher's Cove was most intensively occupied about 1000 years ago, by people who were probably the ancestors of the Maliseet and Micmac from the Martitimes. Shellfish, sea mammals, caribou, deer, moose, bear and beaver provided them with food and raw materials for clothing and tools. 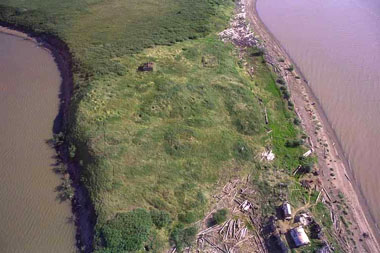