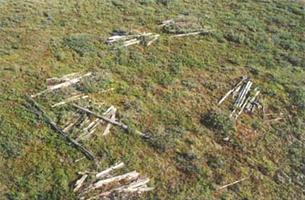 Elder Laura Raymond explains the use of some cultural remains to Cathy Cockney, 1997 (courtesy ISDP). 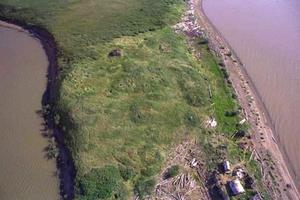 The old village site of Kitigaaryuk, 1996. A modern camp is seen in the bottom right hand corner (courtesy ISDP).
PreviousNext

Kitigaaryuit is the name of an area (ca 5 km2) at the mouth of the East Channel of the Mackenzie River that was the gathering place of the Kitigaaryungmiut. The Kitigaaryungmiut are a band of Inuvialuit (Mackenzie Inuit) whose name was derived from that place. Non-Inuvialuit who could not pronounce the name called it Kittigazuit.

Kitigaaryuit was the location of the largest known seasonal gathering of Inuit in the Canadian Arctic. Up to 1000 people are reported to have gathered there in summer for a highly coordinated beluga whale hunt. Many of those hunters and their families spent the whaling season at the village site of Kitigaaryuk. Up to 200 hunters in their kayaks worked together to drive the whales into shallow waters, where they could be more easily killed. The superb craftsmanship of the Kitigaaryungmiut can be seen in the unique design of their kayaks, which resulted in them being very light for their size.

The Kitigaaryungmiut gathered at Kitigaaryuk again during the sunless days of winter when they participated in games and festivities, and discussed issues of governance. Through archaeological research we know that people occupied this area at least 500 years ago. They lived in multifamily semi-subterranean houses that were made of driftwood and insulated with sod. They also built a number of qadjgit, or larger buildings, where men gathered to do things like work on equipment, share stories, and perform rituals needed to ensure a successful hunt. Women did not spend much time in the qadjgit except to bring food for the men and to participate in drum dances.

The significance of Kitigaaryuit to the Kitigaaryungmiut is also reflected in it having the largest concentration of Inuit graves in the Canadian Arctic. The remains of several hundred traditional graves made of driftwood can be seen within a number of large graveyards.

A series of epidemics took its toll on the Kitigaaryungmiut when outsiders such as traders and whalers began to show up in the area. A devastating measles epidemic killed many people there near the turn of the century. The area was abandoned for a number of years because of the sadness and fear surrounding the place.

After Kitigaaryuit fell out of use as a major gathering place it was used on a seasonal basis by a smaller number of Inuvialuit. An Anglican mission was established in the village site of Kitigaaryuk and ran from 1911 to ca 1917. A Hudson's Bay Company post was built there and ran from 1912 until it was closed in 1933. Over the years, a number of people have lived at the old village site, and hunters still use it on a seasonal basis. Corral and pens of the Canadian Reindeer Project were built on the mainland across from the village site in the early 1950s.

The old village of "Kittigazuit" (Kitigaaryuk) was declared a National Historic Site in 1978 because it is an archaeological site of national significance. An expansion of the national historic site area is now being sought for its importance as a cultural landscape.