Abraham Gesner was the inventor of kerosene (artwork by Irma Coucill). 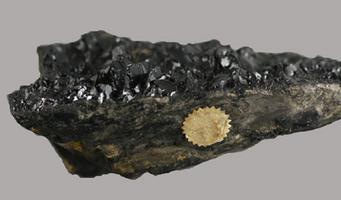 Kerosene provided, for the first time, an inexpensive and abundant supply of a safe fuel that could make good lighting available to the general public, such as in this Argand Kerosene Lamp (courtesy New Brunswick Museum).
PreviousNext

Abraham Gesner, geologist, author, chemist, inventor (b near Cornwallis, NS 2 May 1797; d at Halifax, NS 29 Apr 1864). Gesner invented kerosene oil and, because of his patents for distilling bituminous material, was a founder of the modern Petroleum Industry. He studied, described and mapped the distribution of rock formations in Nova Scotia, New Brunswick and Prince Edward Island. His father, Col Henry Gesner, was exiled from a large farm in New York State and moved to the Annapolis Valley.

After elementary schooling in Nova Scotia, Abraham enrolled as a medical student in London, England, in 1825, and graduated as a physician and surgeon. He returned to Parrsboro, NS, and began a medical practice and also continued to explore the province by boat, on horseback and on foot. He moved to Saint John, NB, 1838, and his five annual reports on the Geology of New Brunswick (1839-43) established him as the first government geologist in a British colony. During this time he rediscovered the veins of solid Bitumen in Albert County, which he used in experiments in distillation. His collection of specimens from New Brunswick traces his survey work across the province and comprises the second oldest "geological survey" collection in the British Empire. His Nova Scotia and New Brunswick collections, specimens obtained from geologists in New England and Europe, as well as specimens and artifacts brought to Saint John by ship captains, were combined to establish one of the first natural history museums in Canada. His private museum opened to the public in 1842 in Saint John, NB. Financial troubles forced Gesner to relinquish his collection to creditors and by 1846 "Gesner's Museum" was incorporated into the Mechanics' Institute museum in Saint John. Gesner returned to Nova Scotia in 1843. Mechanics' Institute collections were donated to the Natural History Society of New Brunswick in 1890. "Gesner's Museum" is now part of the New Brunswick Museum holdings and likely represents the oldest reasonably intact geological collection in Canada.

Beginning about 1846 Gesner developed experiments for distilling "coal oil" from solid hydrocarbons and coined the name "kerosene" for the lamp oil that he had perfected by 1853. He obtained patents in 1854 and a factory was set up under his guidance on Long Island, NY, to manufacture kerosene, which became standard lighting fuel in homes. In 1863 he sold his patents and returned to Halifax where he was appointed professor at Dalhousie.

Gesner wrote numerous scientific papers and reports and several books, the most important of which was A Practical Treatise on Coal, Petroleum and Other Distilled Oils (1861). His other inventions include one of the first effective wood preservatives, a process of asphalt paving for highways, briquettes made from compressed coal dust, and a machine for insulating electric wire. Imperial Oil has provided a tribute at his grave in Halifax for he did "give the world a better light."