Monture was a great-grandson of famous Mohawk leader Joseph Brant (Thayendanegea), who fought for decades for the land rights and independence of the Six Nations Confederacy (see Haudenosaunee). Brant was also a warrior who fought for the British during the Seven Years’ War and the American Revolutionary War (see American Revolution – Invasion of Canada). Therefore, Monture came from a family with a rich military tradition.

Monture was one of eight siblings raised in a two-room log cabin in Tuscarora Township in Brant County, Ontario. At age 12, he enrolled in the Hagersville District High School and began walking eight kilometres each way to school. He graduated four years later and taught school for two years on the Six Nations Reserve. His goal was to save enough money to attend Queen’s University in Kingston, Ontario. Monture enrolled at Queen’s to study mining and metallurgy in 1914, the same year as the First World War broke out.

In December 1917, Monture left university to join the Canadian Expeditionary Force as a gunner in the 72nd (Queen’s) Battery, Canadian Field Artillery. He already had five months of previous service with the unit, which he had gained while it was being formed for overseas duty. The battery had been organized in May 1916 to provide drafts for overseas artillery units. It recruited from students and graduates of Queen’s. Monture remained with the battery until he was discharged on 30 April 1918 to join the Royal Canadian Engineers.

Monture received his commission as a lieutenant on 1 May 1918 at the Engineers Training Depot in St. Johns, Quebec (now Saint-Jean-sur-Richelieu). He sailed to Britain in July and was stationed at Seaford Camp, a large camp on the southeast coast of England and home to thousands of Canadian soldiers. In Britain, he served with the Canadian Engineers Training Depot and both the 2nd and 3rd Canadian Engineers Reserve Battalions, but was never transferred to the fighting on the Western Front.

After the war ended and while still in Britain, Monture was plagued by various medical ailments, which precluded an earlier return to Canada. He sailed to Canada in July 1919 and was released from military service. 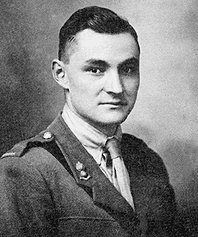 Gilbert Monture in 1919, a young lieutenant with the Royal Canadian Engineers during the First World War.

After he returned to Canada, Monture resumed his studies at Queen’s and received a Bachelor of Science degree in mining engineering in 1921. He was one of the university’s earliest Indigenous graduates. In 1923, he was hired by the federal Department of Mines in Ottawa (Department of Mines and Resources after 1936), where he worked for another 33 years. His first job there was as editor for a department publication. By 1929 he had risen to chief of the Mineral Economics Division in the Department of Mines.

Monture returned to his military roots on a part-time basis in 1935, joining the militia as a 40-year-old civil servant. He served for five years in an engineer unit as a lieutenant. When the Second World War began in 1939, Monture hoped to transfer to the active force; unfortunately, a hand injury from an earlier mining accident prevented him from joining.

Although Monture did not serve in uniform, in the end he made tremendous contributions to the war effort. His department loaned him to the Department of Munitions and Supply, where he was executive assistant to the Metals Controller. In early 1944, he was made Canadian executive officer of the Combined Production and Resources Board formed by Canada, Britain and the United States. Working out of Washington, D.C., he helped allocate much-needed strategic minerals to the war effort. For his wartime work, Monture was made an Officer of the Order of the British Empire (OBE) in 1946. He made similar strategic minerals planning contributions during the Korean War and to the North Atlantic Treaty Organization (NATO). 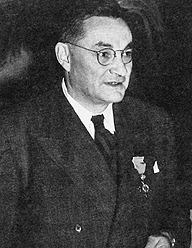 Gilbert Monture as a civil servant, 1949.

After the Second World War, Monture was appointed Chief of the Mineral Resources Division in the Mines and Geology Branch (in the Department of Mines and Resources, from 1949 the Department of Mines and Technical Surveys). He held this position for 10 more years (see Department of Natural Resources). As his reputation grew, Monture was selected as the Canadian government’s representative on several international committees dealing with mineral-economic matters, including committees in the Commonwealth and the United Nations. When he retired from government in 1956, he became vice-president of Stratmat, a private Canadian mineral exploration and development company.

At his alma mater, Queen’s University, Monture helped organize the country’s first university employment service for students. He was also a member of the Queen’s University Council and the Board of Directors of the Queen’s Alumni Association. In 1967, he was made an Officer of the Order of Canada (OC) for contributions to the public service. He also served as a member of the Board of Governors of Trent University from 1966 to 1973.

Monture left a meaningful legacy for his people and all Canadians. In 1971, he helped found the Indigenous Studies program at Trent University, which has grown into the Chanie Wenjack School for Indigenous Studies and offers undergraduate, masters and Ph.D. programs. At Trent, Monture Lounge at Otonabee College and Monture House near Rubidge Hall are named after him; in addition, the Gilbert Monture Oral History Lab was also established in his honour in 2015. His daughter, Barbara Monture Malloch (a 1947 graduate of Queen’s), established the Gilbert Monture Aboriginal Engineering Bursary at Queen’s in memory of her father.