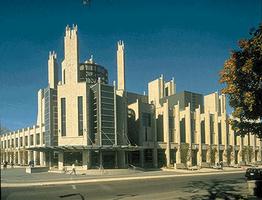 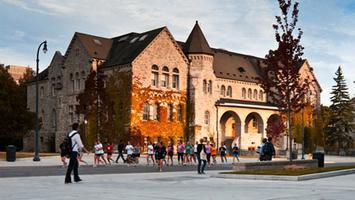 On University Avenue in the fall (courtesy Queen's University) 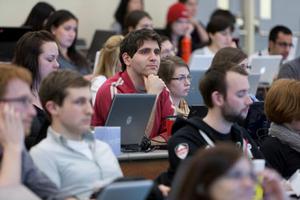 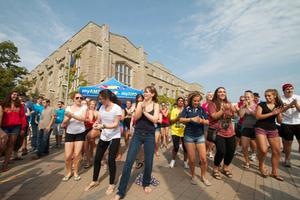 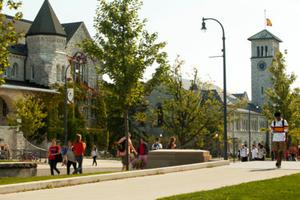 In the heart of the Queen's campus (courtesy Queen's University).
PreviousNext
Queen's University, Kingston, Ont, is one of Canada's oldest degree-granting institutions. It was established as Queen's College (in honour of Queen Victoria) in 1841, by the PRESBYTERIAN CHURCH of Canada in association with the Church of Scotland. Classes began on 7 March 1842 in a rented building with two professors and 10 students. Queen's was intended primarily as a college to train young men for the ministry, but denominational ties progressively diminished. In 1912 Parliament, by amending the charter, completed the separation of church and university. Thus the college became Queen's University at Kingston, an independent institution controlled primarily by its graduates.

Queen's is a mid-sized university with several faculties, colleges and professional schools, as well as the Bader International Study Centre located in Herstmonceux, East Sussex, United Kingdom. Located in one of Canada's historic cities, Queen's is home to many limestone buildings and also includes modern facilities such as the Queen's Centre building opened in 2009 and the School of Medicine building opened in 2011. The campus also has a fully integrated network of six libraries and is home to several museums and galleries.

The university is known for a number of pioneering academic initiatives. For instance, it initiated graduate work and correspondence study in Canada, and was the first to offer academic programs in business and commerce, engineering, physics, art conservation, policy studies and industrial relations.

Queen's is a full-spectrum, research-intensive university that conducts research in areas of critical concern, including global and community health, sustainable energy, environment and the economy, social issues such as surveillance, poverty and bullying, and art conservation.

A member of the prestigious U15 group of research-intensive Canadian universities and the international Matariki Network of Universities, Queen's has a good academic reputation. It also offers student exchange, and international work and study opportunities.

The Queen's campus in Kingston is home to students from more than 90 different countries; international students make up approximately 7% of the full-time student population. As a residential university, more than 90% of students come from outside of Kingston and live in residence. Upper year, professional and graduate students live in a vibrant community surrounding the campus, most within a 15-minute walk.