Canada’s worst road accident to date was a single-vehicle tragedy near Saint-Joseph-de-la-Rive, in the Quebec municipality of Les Éboulements, on Thanksgiving Day, 13 October 1997. A bus, filled with senior citizens on an autumn colours tour, suffered brake failure while descending a steep hill. The bus missed a curve, crashed through the guardrail and toppled into a stony ravine, killing 44 people and injuring four (there were initially five injured but one later died from their wounds).

A similar tragedy had occurred at the same spot in 1974, resulting in 13 deaths.

The country’s second deadliest road disaster occurred near Eastman, Quebec, southeast of Montreal, on 4 August 1978. The brakes of a chartered bus failed, and it plunged into Lac d’Argent after failing to negotiate a sharp corner of the road. The bus was carrying 47 people, about half of whom were members of the Society of Infirmed and Handicapped of the Asbestos Region of Quebec with physical or mental disabilities. Forty passengers including two in wheelchairs — many of whom were screaming for help as the bus initially floated on the surface of the lake — died when the vehicle sank to the bottom. The driver plus six volunteers, who were assisting the group on a visit to a theatre performance in another town, escaped from the bus before it sank.

On 28 May 1980, 22 workers on a Canadian Pacific Railway steel crew — many of them teenagers or young men — were killed when their bus collided with another vehicle on the Trans-Canada Highway near Webb, Saskatchewan, west of Regina. The bus flipped onto its side and was then struck from behind by a tanker truck loaded with liquid asphalt. A fire engulfed the bus, charring the bodies of many of the victims and leaving them unrecognizable in the aftermath. Twelve of the dead were workers from Newfoundland. There were eight survivors.

A collision between a school bus and a freight train on 7 October 1966 killed 19 students from Cité-des-Jeunes school near Vaudreuil, Quebec, and their bus driver. More than 40 students were travelling that day to a Thanksgiving weekend dance in the neighbouring town of Hudson. En route, their bus stopped at a railway level crossing in the town of Dorion, where the boom gates of the level crossing had lowered to allow a passenger train to pass. After the train went by, the bus moved through the crossing, but was struck by a CN freight train, which severed the bus in two. One half of the bus was hurled into a ditch where it caught fire. The other half was dragged by the train several hundred metres down the tracks. The bus driver and 18 passengers were killed instantly in the disaster, while another passenger later died of their injuries. A coroner’s inquest ruled the deaths as accidental. However, there were unconfirmed eyewitness reports that some students may have manually raised the crossing gates, allowing the bus to drive across the tracks following the passing of the first train. Although these reports were dismissed by the inquest, a federal inquiry into the disaster accepted testimony that someone may have raised the crossing gates, without criminal intent.

On 31 July 1953, 20 people died after their Colonial Coach Lines passenger bus collided with a truck parked on the side of Highway 2 near Morrisburg, Ontario. The bus careened off the highway and into the Williamsburg canal system. Seventeen survivors escaped from the bus as it sank in about six metres of water.

On 17 July 1993, 19 people died on the highway near Lac Saint-Jean, north of Quebec City, when a minibus collided with a pickup truck, igniting an explosion that engulfed the vehicles in flame. Seventeen of the dead were senior citizens from the community of Verchères, near Montreal — all parishioners from a single church congregation, returning home from a pilgrimage to a Roman Catholic shrine. The other two victims were members of a family in the truck.

On 29 November 1960, 17 students from Chipman High School near Edmonton were killed when their school bus was struck by a freight train in Lamont, Alberta.

On 6 April 2018, 16 members of the Humboldt Broncos, a Saskatchewan junior hockey team, died when their team bus was struck on the side by a transport truck while crossing an intersection. The dead included the driver of the bus, 10 players, as well as coaches and other team assistants. Thirteen others on the bus, plus the driver of the transport truck, survived the crash. The rural intersection near Tisdale, Saskatchewan had been the scene of an earlier collision in 1997 that killed six members of a family.

On 30 January 1954, 14 people were killed on the highway at Yamachiche, Quebec, near Trois-Rivières, when their bus collided with an oncoming transport truck. Eight passengers, as well as the drivers of both vehicles, managed to escape the inferno that engulfed the vehicles after the crash.

On 8 October 1989, 13 people died and 45 others were injured during a family reunion hay ride near Cormier Village, New Brunswick, northeast of Moncton. The victims were sitting in a hay wagon pulled by a tractor, when a passing logging truck lost control on the road, and its load of logs crashed down onto the wagon. Five children were among the victims.

On 6 February 2012, 11 people were killed in Hampstead, Ontario, west of Kitchener, when a flatbed truck struck a minivan filled with migrant workers from a nearby poultry farm. The drivers of both vehicles died, as well as nine farm workers.

The ongoing carnage on Canada’s roads and highways has resulted in a patchwork of responses from governments and non-governmental safety advocacy groups over many decades. One reason for the varied response is that 13 provincial and territorial governments, not the federal government, are primarily responsible for highways and for the regulation and enforcement of motor vehicle operation (see also Automobile). A small fraction of highways (e.g., the Alaska Highway through British Columbia and Yukon, and highways that run through Canada’s national parks) are operated by the federal government. Most high-profile road disasters — especially those involving large numbers of children — prompt public calls and renewed efforts for increased road safety. But changes have usually occurred primarily in the province where the disaster took place.

One example of this is the 12 January 2008 crash in New Brunswick of a 15-passenger van carrying the Bathurst High School boys basketball team. Seven of the boys died, along with the coach’s wife, when the driver of the van lost control of the vehicle on a snow-covered highway and struck an oncoming transport truck. The disaster resulted in a campaign by some of the dead boys’ parents for a nationwide ban on using 15-passenger vans for transporting children, and for stringent national regulations on the way schools transport students to extra-curricular events. Despite the horror of the Bathurst tragedy, only a few provinces, including New Brunswick, implemented the van ban, and 10 years later (as of 2018), no such national ban exists. Meanwhile across the country, a wide variety of rules and guidelines — often poorly understood and enforced — govern the transport of children to off-site school activities. 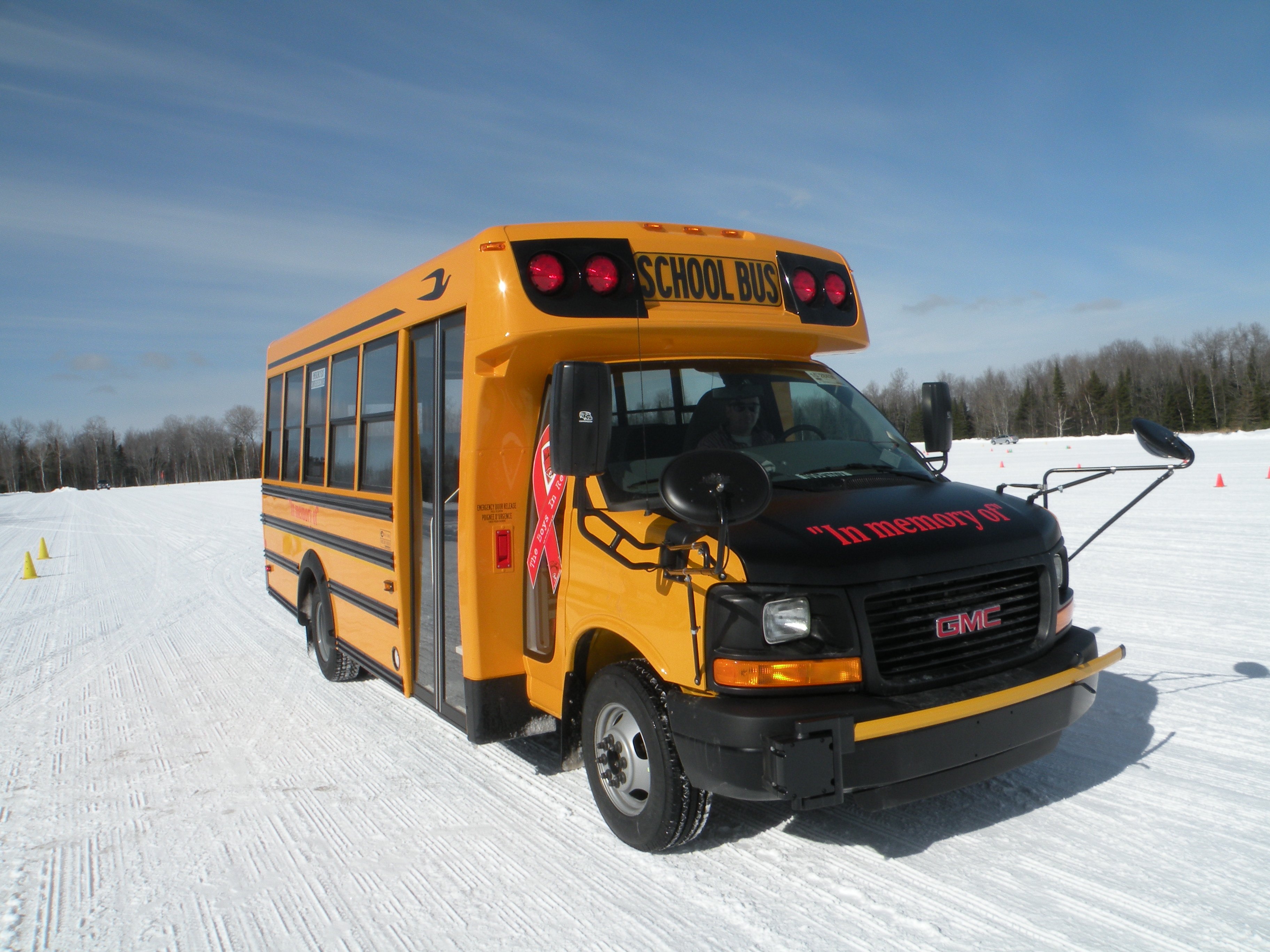 The multi function activity bus (MFAB) is a small version of the school bus, ideal for transporting sports teams and small student groups to after school activities.

That’s not to say there is no national co-ordination of road safety issues. Transport Canada and the Royal Canadian Mounted Police investigate serious road disasters and make recommendations for safety. Transport Canada also enforces more than 50 standards that govern what safety and crash-avoidance features all new vehicles sold in Canada must be equipped with. The Canadian Council of Motor Transport Administrators (CCMTA) – a joint federal-provincial road transport agency – also raises awareness and attempts to co-ordinate policy and regulations across jurisdictions.

Over time, road tragedies have led to the gradual introduction and eventual acceptance of features and practices that are now common in Canadian vehicles and among Canadian drivers. These include graduated licences for novice drivers, three-point seat belts, children’s seating restrains (e.g., booster seats) and winter tires (only mandatory in Quebec). Crash-avoidance devices (e.g., anti-lock braking systems) and a variety of safety-oriented engineering features (e.g., driver and passenger frontal air bags) have also become common. Electronic stability control (ESC) — which gives drivers more control over their steering during sudden braking or sharp turns — is an example of a relatively recent technology that is becoming increasingly common in Canadian vehicles. ESC has been required on most new vehicles sold in Canada since 2012.

The number of vehicle fatalities in Canada has dwindled steadily since the start of the 21st century. In 1996, there were more than 3,000 vehicle deaths every year and roughly 19,000 serious injuries requiring hospitalization. In 2016, that number had fallen to 2,000 deaths a year and roughly 10,000 serious injuries. Since 2001, the CCMTA has co-ordinated a series of multi-year, national road safety campaigns aimed at promoting safe driving and best practices. The current campaign, called Road Safety Strategy 2025, aims to further reduce the annual fatality count and make Canada’s roads the safest in the world.