Mississaugas of the Credit First Nation

The Mississaugas of the Credit are a First Nation based in southwestern Ontario. Their reserve, known as New Credit, occupies just under 6,000 acres (about 24 km2). It straddles Brant and Haldimand Counties and is adjacent to the Six Nations of the Grand River reserve. As of 2022, 957 of the First Nation’s 2,731 members live on reserve (see also Reserves in Ontario).

The Mississaugas of the Credit are a First Nation based in southwestern Ontario. Their reserve, known as New Credit, occupies just under 6,000 acres (about 24 km2). It straddles Brant and Haldimand Counties and is adjacent to the Six Nations of the Grand River reserve. As of 2022, 957 of the First Nation’s 2,731 members live on reserve (see also Reserves in Ontario).

The Mississaugas are a sub-group of the Ojibway (Anishinaabe) Nation. The French were the first Europeans to encounter them, on the north shore of Lake Huron and Georgian Bay, in 1634. Participants in the trans-Atlantic fur trade, the Mississaugas became involved in the Beaver Wars of the 17th century. By the close of the conflict they had displaced the Haudenosaunee from Southern Ontario. The Mississaugas established their homes on the flats of rivers and creeks flowing south into Lake Ontario. One group of the Mississaugas claimed approximately 4 million acres of land at the western end of Lake Ontario as their territory and the Credit River as their principal home. The territory of the Mississaugas of the Credit became some of the most heavily populated and highly industrialized land in all of Canada. It encompasses much of the Greater Golden Horseshoe region of Southern Ontario. 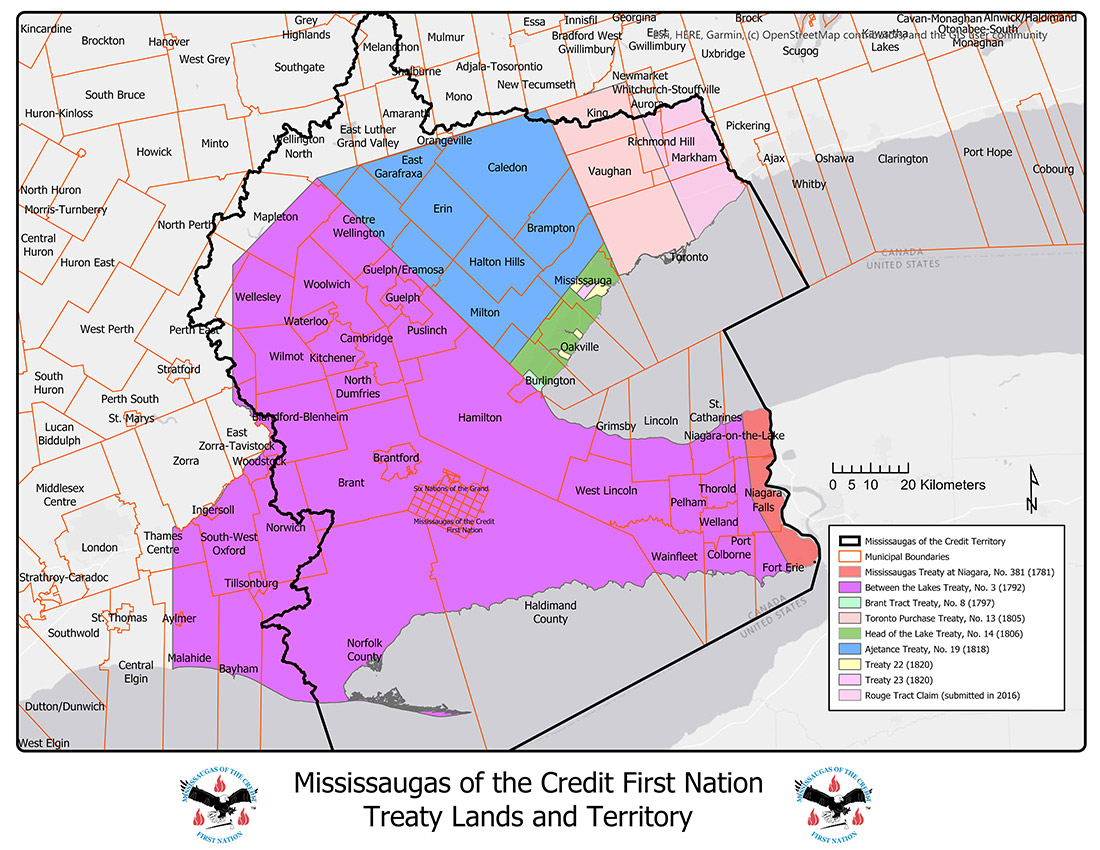 The Mississaugas were a seasonally migrant people moving about their territory to hunt, fish, and gather the land’s resources as they became available. As participants in the fur trade, the Mississaugas of the Credit enjoyed economic relationships with both the French and the British until the Treaty of Paris (1763) confirmed British hegemony over much of North America. Under pressure to acquire land to resettle Loyalists in the aftermath of American Revolution, the British Crown and the Mississaugas of the Credit negotiated eight treaties between 1781 and 1820: the Mississaugas Treaty at Niagara, No. 381 (1781); the Between the Lakes Treaty, No. 3 (1792); the Brant Tract Treaty, No. 8 (1797); the Toronto Purchase, No. 13 (1805); the Head of the Lake Treaty, No. 14 (1806); the Ajetance Treaty, No. 19 (1818); Treaty 22 (1820); and Treaty 23 (1820). Believing they would be sharing the land with newcomers, the Mississaugas willingly entered into the early treaties. However, they soon discovered that the Crown considered the treaties outright land purchases. Inundated by Loyalist refugees, including 2,000 Haudenosaunee Loyalists, the Mississaugas soon saw their land base diminished. In addition, their traditional economy collapsed as the arrival of the newcomers rapidly depleted fish and game stocks. The Mississaugas also found their seasonal movements hindered as settlers established farms and villages throughout their territory and drove them from their campsites. To make matters more difficult, the settlers brought with them unfamiliar diseases that took a deadly toll on the First Nation’s population. By the 1820s, when the last treaties with the Crown had been concluded, the population of the Mississaugas of the Credit had been reduced by 60 per cent, from about 500 people to 200 people. In addition, their territory had been reduced from 4,000,000 to 200 acres. 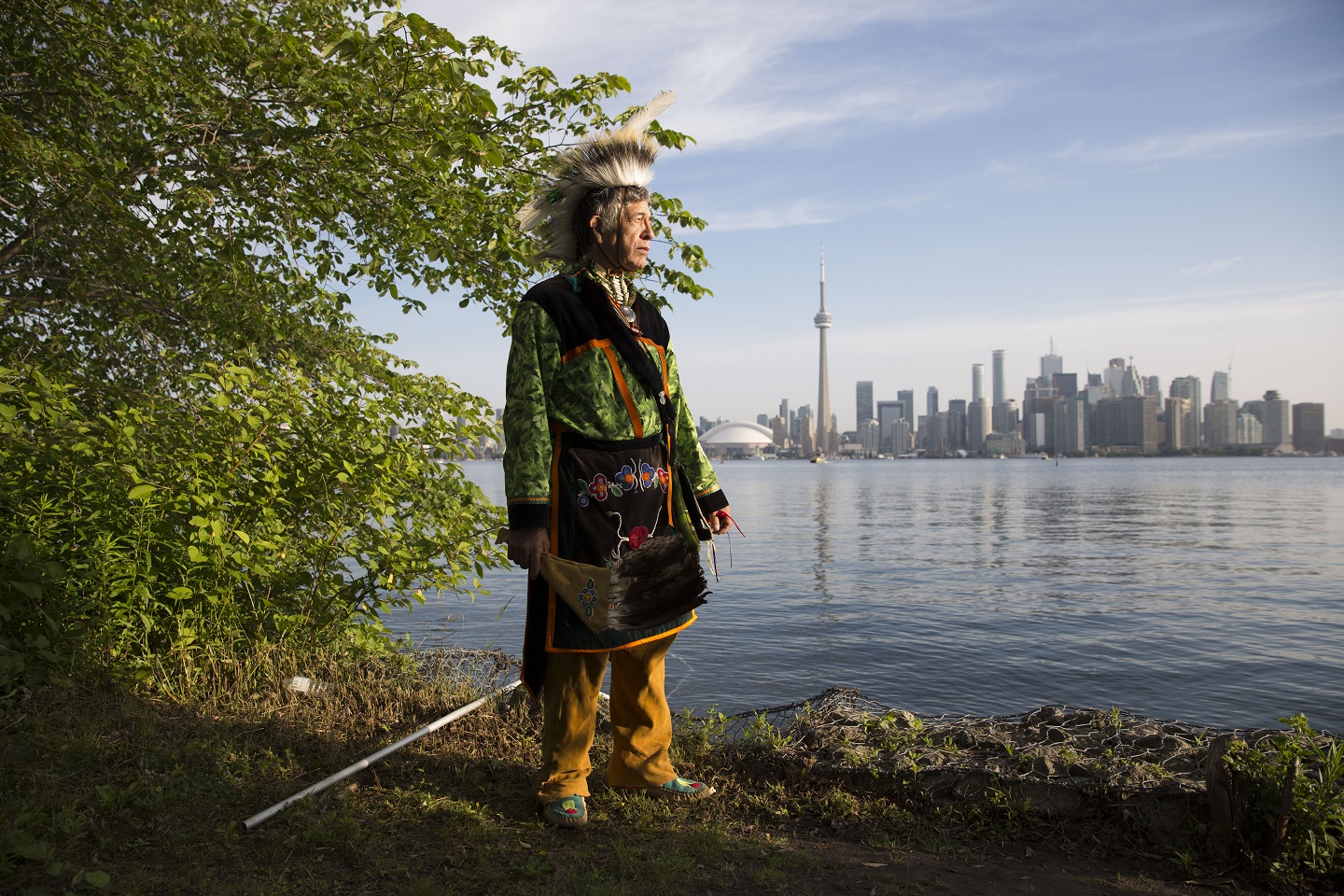 The survival of the Mississaugas of the Credit as a nation seemed questionable until member Kahkewaquonaby (Reverend Peter Jones) helped his people adopt a Christian, agrarian lifestyle. Established in 1826, the Credit Mission Village was located where the Mississauga Golf & Country Club now stands, near the point at which the Queen Elizabeth Way crosses the Credit River. Here, the Mississaugas became successful farmers. Their village included a hospital, school, church, mechanic shops, and log-cabin style homes. The Mississaugas were the major shareholders of the Credit River Harbour Company, the employees of which built piers in the lake and charged tolls for handling the goods (namely lumber) that arrived at the port. Eventually, the Mississaugas also built their own schooner to ship goods on Lake Ontario. Continuous settler encroachments, the depletion of resources in the vicinity of their village, and the inability to gain title to their village lands, caused the Mississaugas to relocate. In 1847, the Mississaugas moved to their present-day location. The settlement became known as “New Credit.” The Mississaugas initially replicated their agricultural success at their new location. However, early in the 20th century, many members of the First Nation moved away from the reserve to take up industrial-type jobs in nearby towns and cities.

As early as 1830, the Mississaugas at the Credit Mission Village adopted written by-laws and customs. These documents contained provisions regarding the structure of the First Nation’s government, how to deal with criminal matters, and land and resource use. The by-laws, drafted by Chief Peter Jones, blended the First Nation’s traditional laws and customs with British laws. They were not imposed by the British Crown, but established by the Mississaugas themselves — their own self-government. The Mississaugas of the Credit began holding elections under the Gradual Enfranchisement Act following its introduction in 1869. This act preceded the Indian Act of 1876, under which future band elections would be conducted. Currently, the Mississaugas of the Credit elect their Chief and seven councillors every two years. Once elected, each councillor is assigned a pillar of responsibility pertaining to the fulfillment of the community’s strategic growth plan. The seven pillars are: economic prosperity, wellness, environment and sustainability, education, cultural awareness, community infrastructure, and governance. In 2016, the Mississaugas of the Credit signed a relationship accord with the other Mississauga First Nations in Ontario, namely Alderville, Hiawatha, Curve Lake, Scugog Island, and the Mississauga First Nation (near Blind River). The accord aims to collectively build the larger Mississauga nation and speak with a unified voice towards common goals. These goals pertain to issues of sovereignty, economics, education and health. 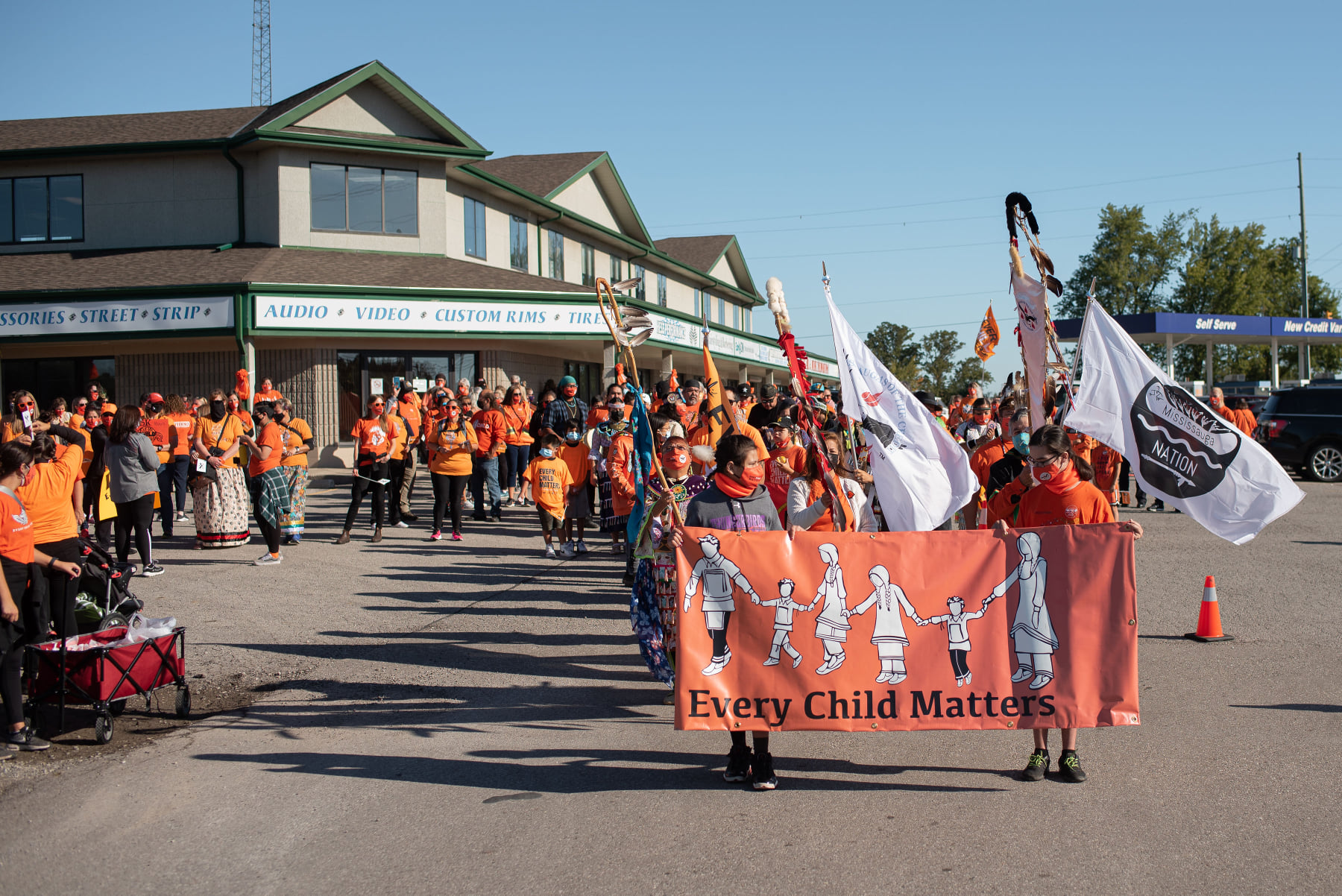 The Mississaugas of the Credit, recognizing that a number of injustices occurred during the treaty making period, have filed multiple claims against the Governments of Canada and Ontario. For example, in 1986, the Mississaugas filed the Toronto Purchase Claim. The claim alleges the Crown acquired more land than originally bargained for, and further, that the Crown had not paid a reasonable price for the land “purchased” in the 1805 Toronto Purchase. In 2010, the Toronto Purchase claim was settled in conjunction with the Brant Tract Claim for $145 million — at that time the largest settlement in Canadian history. As of 2022, three of the claims filed by the Mississaugas of the Credit are ongoing. They include one regarding unsurrendered traditional lands in the Rouge Tract that encompass much of present-day Scarborough, Markham, and Whitchurch-Stouffville. 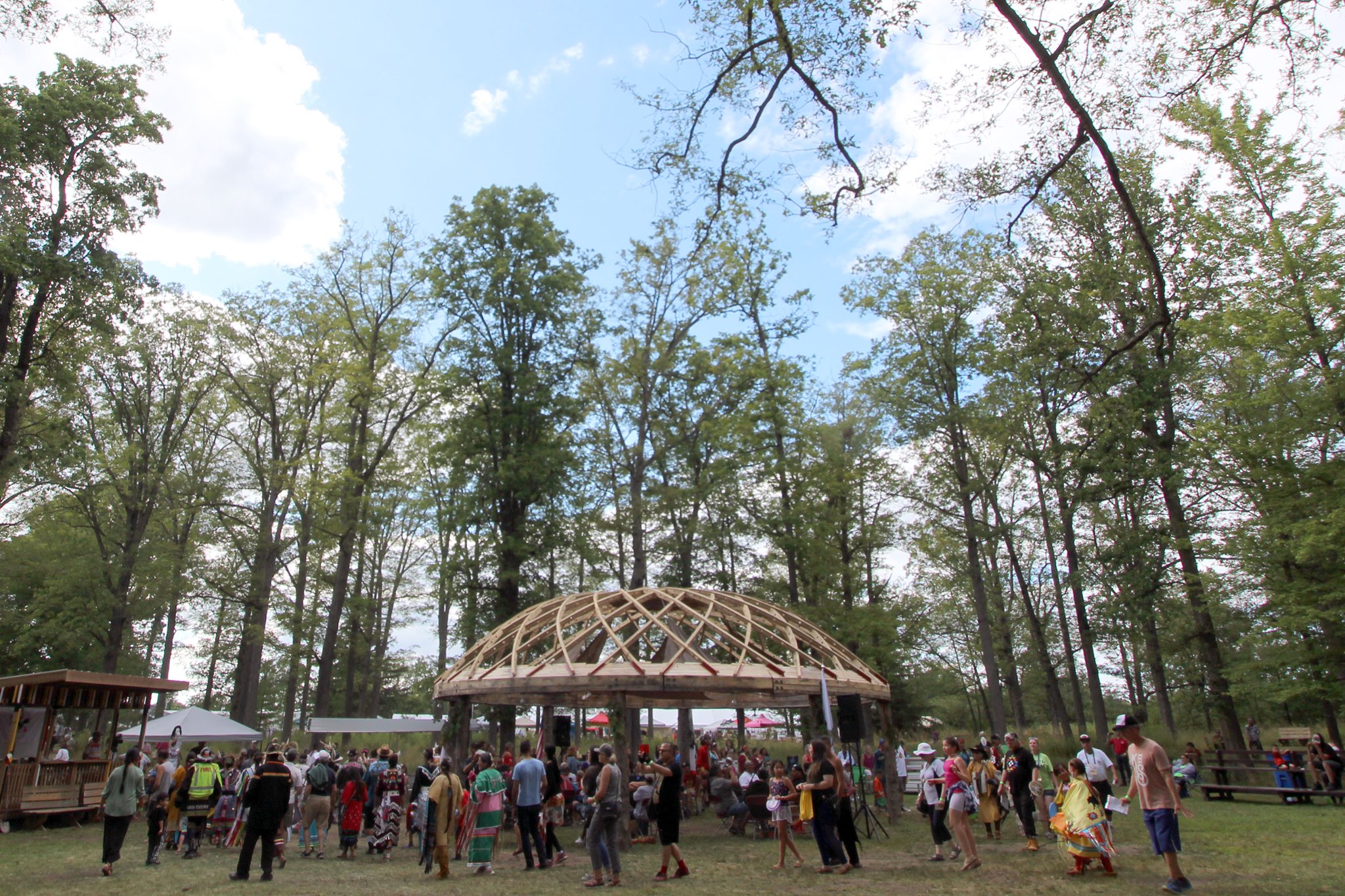