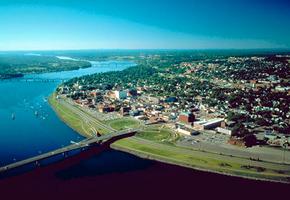 Saint John River, 673 km long, rises in northern Maine and flows northeast into the forests of Madawaska County to Edmundston, where it is joined by the Madawaska River and turns southeast, forming much of the border between Maine and New Brunswick. Its drainage basin covers 55 400 km2, of which some 20 000 km2 is in the US, and it has a mean discharge of 1100 m3/s. It receives its chief tributary, the Tobique River, and swings eastward south of Woodstock.

Called Oo-lahs-took, "goodly river," by the Maliseet who lived along its banks, it is generally tranquil, except for cataracts at Grand Falls (25 m) and Beechwood (18 m), both of which have been harnessed for hydroelectric power. The river flows east past Fredericton and Oromocto, gradually widening and trending southward through a beautiful valley. On the lower course, numerous long, low islands have been formed by silt and molded by the current.

Near the city of Saint John the river enters Long Reach, a narrow lake, and receives the Kennebecasis River from the northeast. At Saint John the powerful Bay of Fundy tides throw the river back through a narrow gorge, called Reversing Falls. De Monts and Champlain anchored in Saint John harbour and named the river 24 June 1604, the feast day of St John.

La Tour built a fort at the river's mouth 1630, but it was not until the Loyalists arrived in 1783 that significant settlement came to the valley. In the early 19th century, timber was driven from Madawaska, over Grand Falls, to Saint John, which became one of the most prosperous ports in British North America.