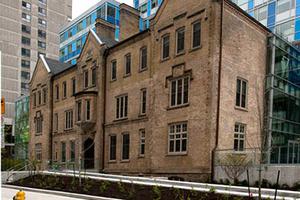 The House of Industry has been preserved as part of the new downtown YWCA, circa 2012 (photo \u00a9 by James Marsh). 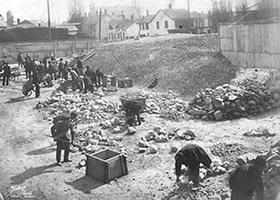 Men break stone in return for a bed and a meal at the House of Industry, circa 1900 (courtesy City of Toronto Archives/Series 810, File 3). 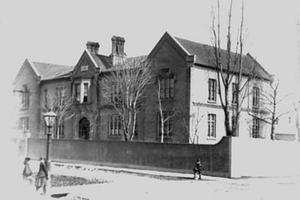 This building for the House of Industry was built in 1848. It is seen here as it stood in the 1890s (public domain).
PreviousNext

In the 1830s, even the artisans, tradesmen and labourers who had helped build the town of York (TORONTO) were in crisis. The town was in an economic depression, and many people, especially recent immigrants, were out of work and unable to support their families. Private charities could do only so much, so the city created a new institution, the House of Industry, to serve the "deserving poor."

The House of Industry was founded in 1837, but in 1848 a new building, whose façade still stands, was constructed under the architect William THOMAS, who refused payment for his work. Those who were eligible to be housed in the facility were the elderly and infirm with no family support; people in such a poor state of health (certified by the Medical Officers of the House) that they could not work; and orphans, deserted children and the children of those too poor or ill to support them. The House of Industry was not established to help those who were unemployed of their own accord; rather it was a last resort for those who had tried other means of obtaining assistance. Recipients of the House's benefits were often required to do chores in return for help.

Over the years, the House of Industry responded to changing conditions. After the First World War, the House concentrated largely on helping the families of returning soldiers. By 1947, the House stopped serving casual clients and became solely a home for the elderly, changing its name to Laughlen Lodge, in honour of longtime superintendents Arthur and Frances Laughlen. Today, the old façade has been preserved as part of the new downtown YWCA.