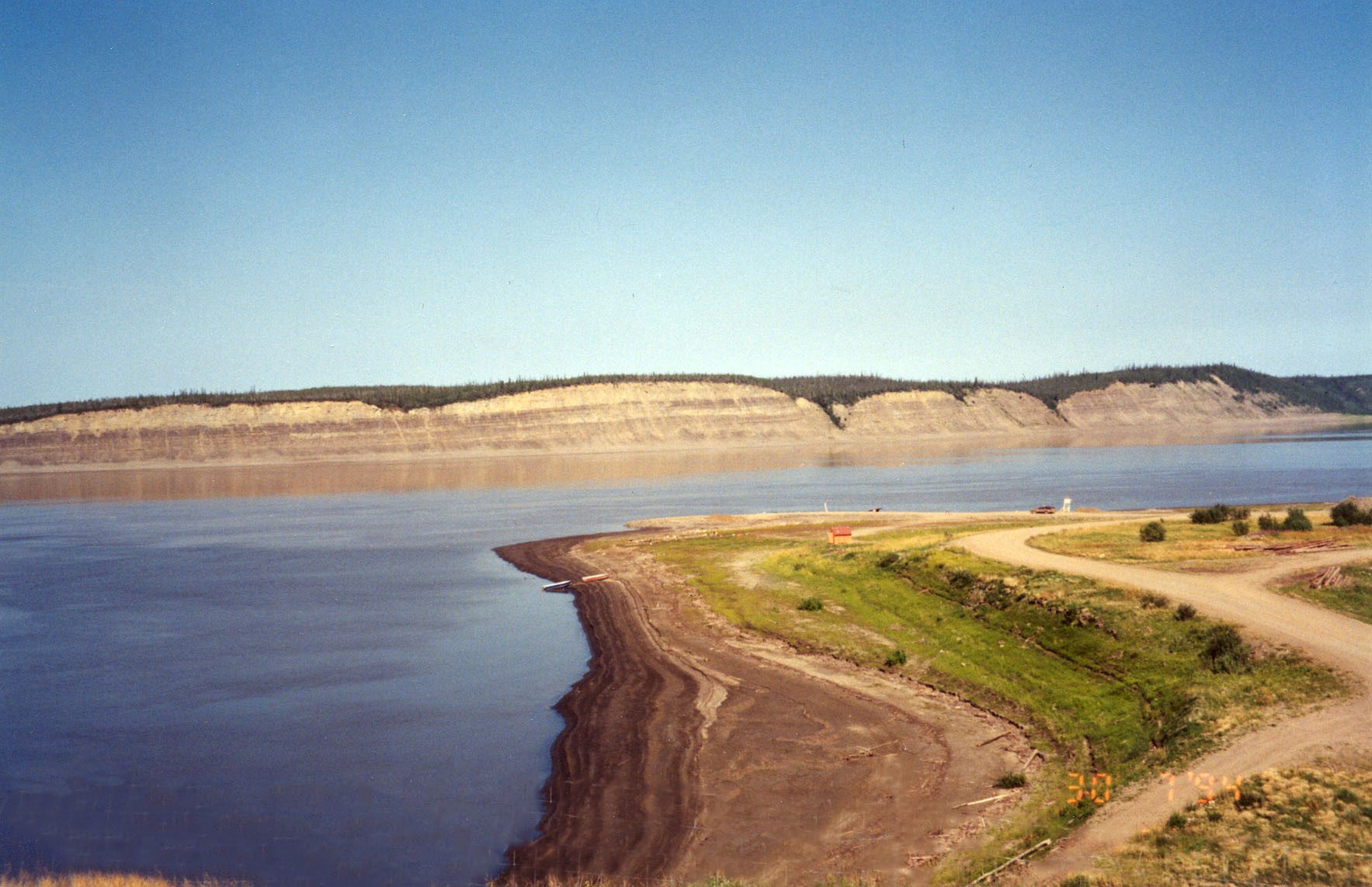 Archaeology and oral history indicate that the flats below Tsiigehtchic have been used for the past 1,400 years by the Gwichya Gwich’in, as a summer fish camp or meeting and trading place with other Indigenous peoples. Ancient stories about Raven, the trickster, are centered here. Other stories recount the richness of the fishery, describing the flats covered with tents, smokehouses and drying racks while families fished nearby making dry fish to prepare for winter. As visitors arrived, the place became alive day and night with dances and games. The Gwich’in name for the flats is Łèth T’urh Kak (“on the mud flats”).

View of Tsiigehtchic from the Dempster Highway with the Arctic Red River in the foreground and the Mackenzie River in the background, 1993.

The first European contact with the Gwichya Gwich’in occurred in the summer of 1789 when Alexander Mackenzie’s party visited a fish camp just upriver. Mackenzie’s journey attracted others including John Franklin. Franklin encountered the Gwichya Gwich’in while on a mapping expedition in 1825. Over the next 150 years, traders, missionaries, prospectors and others followed, bringing changes to the Gwich’in life.

Although the Gwichya Gwich’in participated in the early fur trade, they continued practicing their traditional life on the land. They traded at posts along the Mackenzie River and in the Yukon during their seasonal cycle of travel. It was not until 1901 that a post was built in Tsiigehtchic by the Hislop and Nagle Trading Company. The Hudson’s Bay Company followed in 1902.

How do you pronounce Tsiigehtchic?

Once fur traders arrived in the Tsiigehtchic region, missionaries followed. In 1859, an intense competition began between the Roman Catholic Oblates and Anglicans to convert the Gwich’in to Christianity. While most Gwich’in eventually accepted the Anglican faith, many Gwichya Gwich’in turned to the Oblates’ teachings. Small Oblate missions were built on the flats and at Teetshik Goghaa, located just downriver and often referred to as “old Arctic Red.” Between 1895 and 1896, the Oblate mission of St. Nom du Marie was built on the height of land in Tsiigehtchic. The mission’s three buildings were the first in the community. The churches encouraged people to come to the mission to celebrate religious holidays. However, by the turn of the 20th century, Gwichya Gwich’in children were being sent to the residential mission school in Fort Providence, over 1,440 km upriver from Tsiigehtchic. Many stayed for five or more years. They returned home with little or no knowledge of the Gwich’in language and culture, and spoke English and French. Many never returned home. Later, Gwichya Gwich’in children were sent to residential schools in Aklavik, Inuvik and Yellowknife. 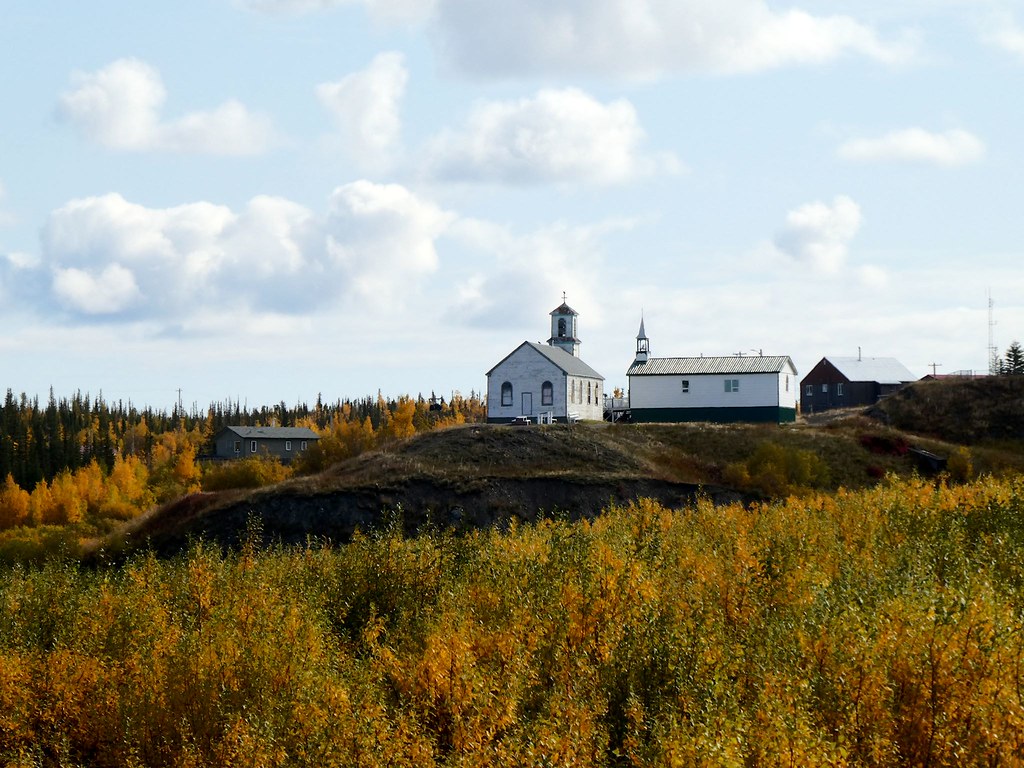 Between 1895 and 1896, a Roman Catholic mission was built on the height of land in Tsiigehtchic. The mission's three buildings were the first in the community. While the original buildings no longer exist, a Roman Catholic church and chapel, pictured here, were built in the same location.

("Tsiigehtchic church" by dvs is licensed under CC BY 2.0)

On 26 July 1921, Gwichya Gwich’in Chief Paul Niditchie and Fabien Laloo (Coyen) signed Treaty 11. The Gwich’in understood the treaty as a friendship treaty that would ensure their way of life would be protected. However, obligations under the treaty were never fulfilled. In 1992, the Gwich’in signed a modern treaty, the Gwich’in Comprehensive Land Claim Agreement. (See also Reserves in the Northwest Territories.)

Traditionally, leadership among the Gwich’in was fluid. Various tasks groups were led by individuals most skilled in the task. Later, as with other First Nations in Canada, the Indian Act imposed a system of governance involving band councils and elected chiefs. Members of the Gwichya Gwich’in First Nation, both those living in Tsiigehtchic as well as elsewhere, elect a chief and three councillors every two years.

On 21 June 1993, Tsiigehtchic was officially recognized as a charter community. A charter community is a type of municipality. Gwichya Gwich’in First Nation’s elected chief and council also act as Tsiigehtchic’s municipal government. In addition to the three councillors elected by the First Nation’s election code, two councillors are elected through the Northwest Territories’ Local Election Act. 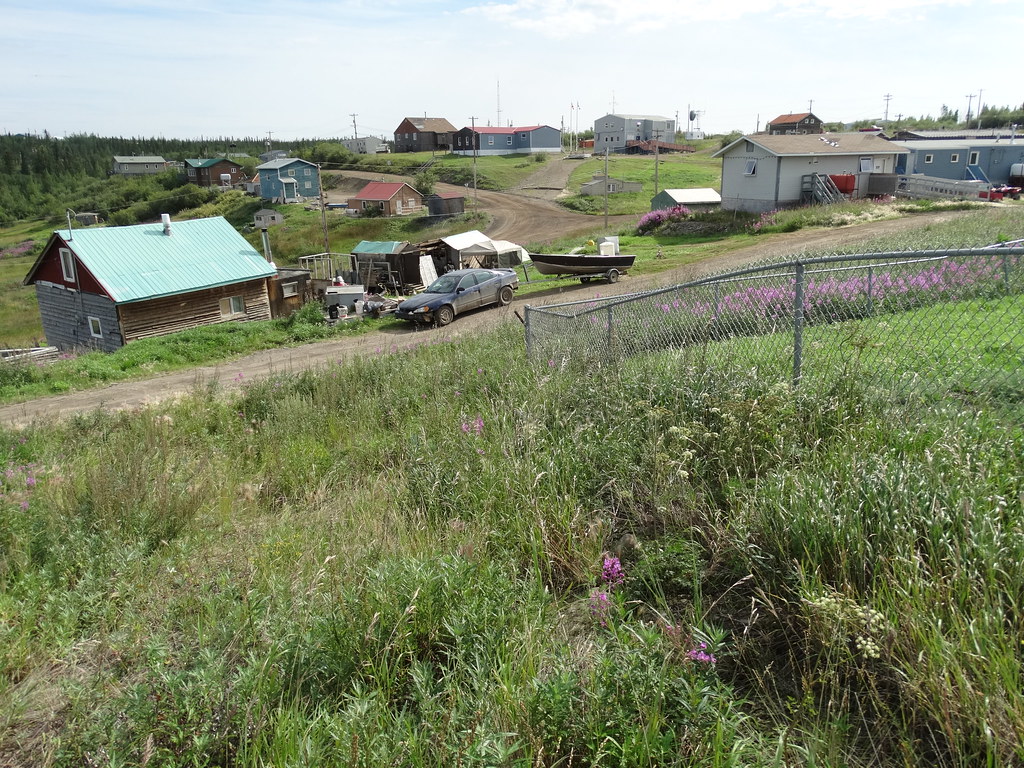 Tsiigehtchic was formerly known as Arctic Red River. Its name changed to Tsiigehtchic (“at the mouth of iron river”) in 1994. 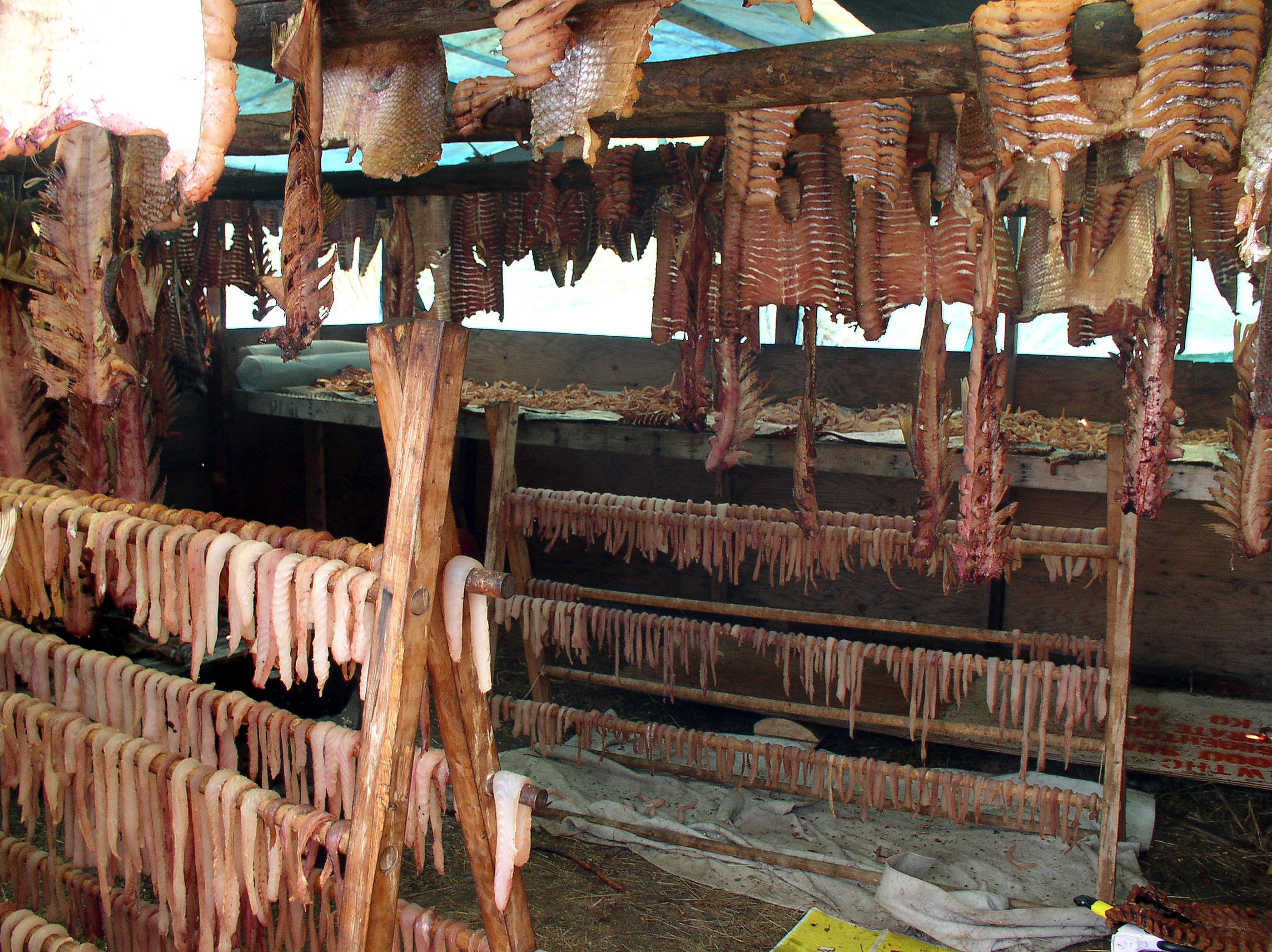 Fish dry on racks at Noel and Alice Andre's fish camp on the flats, Tsiigehtchic, Northwest Territories, 2003. Tsiigehtchic is renowned for its dry fish.

In 2007, thawing permafrost revealed the frozen and partially mummified remains of a 13,650 year old steppe bison below the community cemetery. This is one of the most significant paleontological discoveries in the Northwest Territories. Exhibits, including a replica of the skull of the steppe bison, can be explored at the Tsiigehtchic Visitors Centre. The Visitors Centre also carries traditional and contemporary arts and crafts created by local artists including Margaret Nazon. Nazon is well-known for creating celestial beadwork designs that blend traditional beading techniques with her fascination of images from the Hubble space telescope.

Today, residents still maintain summer fish camps on the flats and the community is renowned for its dry fish. Visitors are always welcome.