Originally named Peel’s River Post, Fort McPherson began in 1840 as a Hudson’s Bay Company (HBC) trading post. It was the first post established in the lower Mackenzie Valley. The HBC strategically located the post on the lower Peel River in order to trade primarily with the Gwich’in. The post was initially located 6.5 km upriver from the present-day community at Old Fort or Zheh Gwajàt (“fort-rotten” or “fallen-down”). Due to flooding, it was moved between 1848 and 1849 on the recommendation of Gwich’in leader Vihzriiniitsii T’ih (“Painted Face’s Father,” also known as Red Leggings). The new location was atop a high hill called Chii Tsal Dik, within the present-day community of Fort McPherson. 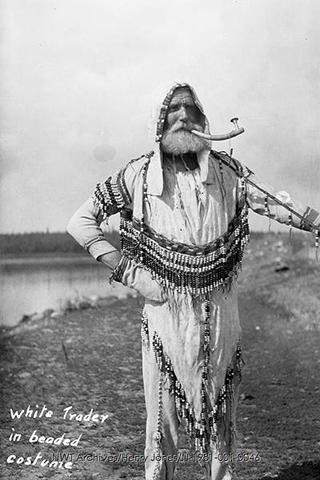 A fur trader in a beaded costume, believed to be John Firth. Firth managed the Hudson Bay Company post at Fort McPherson from 1893 to 1920.

In the early years, the Gwich’in mainly traded caribou and moose meat in exchange for Euro-Canadian trade goods. This meat was critical for sustaining HBC staff at Peel’s River Post and other northern posts. After the 1880s, fine fur became an increasingly important trade item. Originally from the Orkney Islands, Scotland, John Firth was the post’s most notable HBC manager (1893–1920). He and his wife, Margaret Stewart, have many descendants who live in Fort McPherson and other communities today. For over 60 years, Fort McPherson was the principal post in the Mackenzie Delta region.

Missionaries followed the fur traders, and in the early 1860s, Roman Catholic and Protestant missionaries arrived to evangelize the Gwich’in. The Teetł’it Gwich’in largely adopted the Anglican faith. The most prominent early minister was Archdeacon Robert McDonald, born in Manitoba to Scottish and Ojibwe (Anishinaabe) parents. A talented linguist, McDonald lived for over 40 years with the Gwich’in (1862–1904). He and his Gwich’in wife, Julia Kutug, translated the Bible and other religious texts into Gwich’in. McDonald also created a Gwich’in dictionary and grammar books that are still used today. 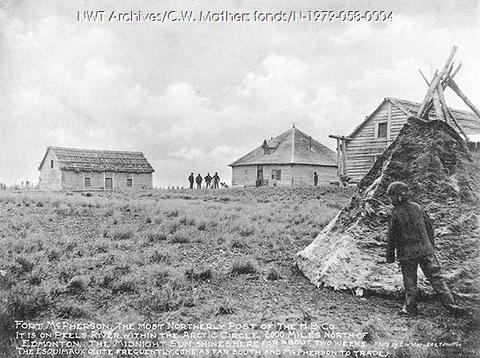 During the Klondike Gold Rush (1897–99), Fort McPherson was a base from which prospectors reached Yukon’s goldfields. In the first year of the gold rush, more than 1,500 people passed through Edmonton on their way to Yukon, travelling along the Peel and Porcupine rivers. About 100 of these stampeders passed through Fort McPherson. Their arrival on Gwich’in lands led the Gwich’in to work as guides, packers and hunters. Their trade network extended into Dawson City where they purchased modern goods such as canvas tents, stoves and other goods.

In 1903, the Canadian government established the first Royal North-West Mounted Police (RNWMP) detachment in Fort McPherson (known as the North-West Mounted Police until 1904). The detachment was meant to help assert Canadian sovereignty in the western Arctic. Most RNWMP patrols, although arduous, were uneventful. However, the patrol of 1910–1911 is known as “The Lost Patrol.” During this tour, four RNWMP officers — the tour’s entire contingent — died on their way to Fort McPherson. They were returning to the hamlet after an unsuccessful attempt to reach Dawson, 760 km away. Charlie Stewart, a special constable from Fort McPherson, played a key role in discovering the lost members. They are buried in the Saint Mathew’s Anglican Church Cemetery in Fort McPherson.

A dog lounges in Fort McPherson, Northwest Territories on 29 July 2011.

On 28 July 1921, Teetł’it Gwich’in Chief Julius Salu and Johnny Kyikavichik (Kay) signed Treaty 11 in Fort McPherson. The Gwich’in understood Treaty 11 as a friendship treaty that would protect their way of life. Obligations under the treaty were never fulfilled and a modern treaty, the Gwich’in Comprehensive Land Claim Agreement, was signed in Fort McPherson on 22 April 1992.

It was not until the 1950s that many Teetł’it Gwich’in families settled permanently in Fort McPherson. At the time, the federal government encouraged people to move into town, offering social programs and the establishment of a school and nursing station. Many families, however, still maintain camps on the land.


The Fort McPherson Tent and Canvas Shop is renowned for its custom canvas wall tents. It also sells other durable and practical items like canvas tarps, attaché bags, backpacks, duffle bags and portfolios. The shop began as a government project in 1970, but since 1990 has run as a successful business with almost 100 per cent local staff.

Incorporated as a hamlet on 1 November 1986, the Fort McPherson’s municipal government includes a mayor and eight councillors.

Traditional Gwich’in leadership was fluid and led by individuals most skilled in a particular task. Later, the Indian Act imposed a system of band councils and elected chiefs. Every three years, members of the Teetł’it Gwich’in First Nation, living in Fort McPherson and elsewhere, elect a chief and seven councillors, one of whom serves as sub-chief.

CBQM, Dennis Allen, provided by the National Film Board of Canada

The Midway Lake Music Festival, 40 km from Fort McPherson on the Dempster Highway, attracts people from the Northwest Territories, Yukon and Alaska to take part in old-time fiddling, dancing and singing under the midnight sun. Hosted by Fort McPherson, it has operated since 1986 on the first long weekend in August and is an alcohol and drug-free event.

CBQM, a local radio station run by volunteers for almost 40 years, can be heard locally, in other communities in the Mackenzie Delta and in camps on the land. The station has served as an important expression of identity and pride. Programming ranges from personal messages from one community member to another, to information such as, “A wolf has been spotted near the hamlet.” CBQM also airs news, music, recipes, interviews and storytelling.


Fort McPherson and members of the community are showcased in the 2016 film The Sun At Midnight —the first feature film written, filmed and produced in the Northwest Territories. The film was produced by Kirsten Carthew and Amos Scott of Jill Jackfish Productions in association with the Gwich'in Social and Cultural Institute. 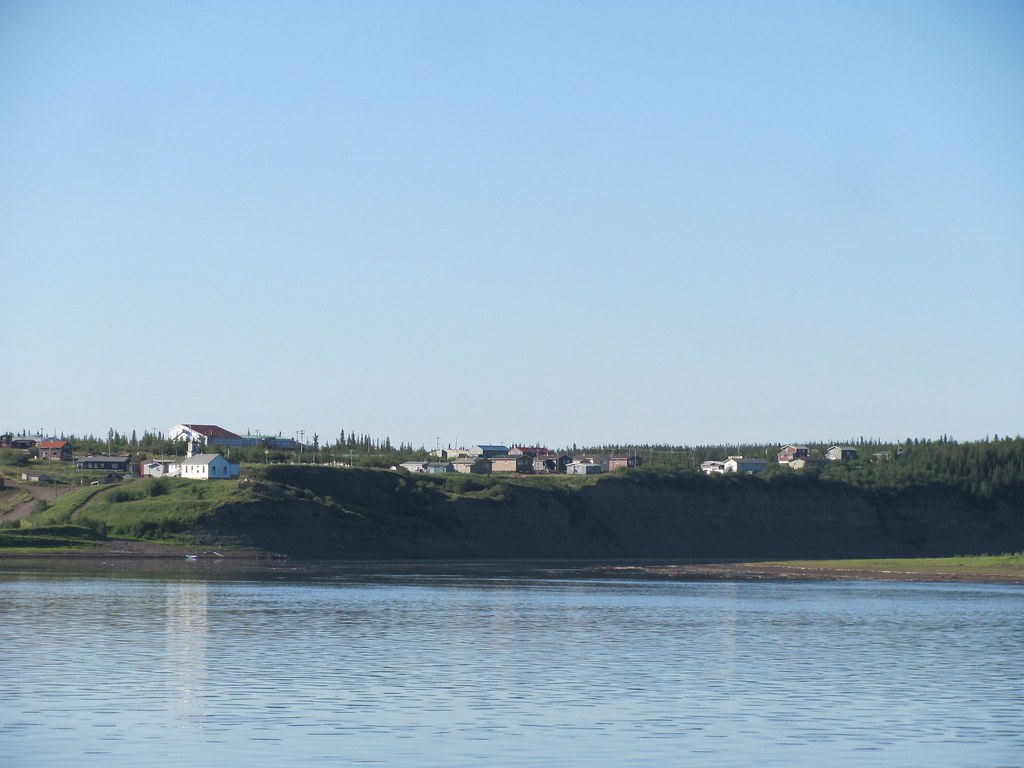