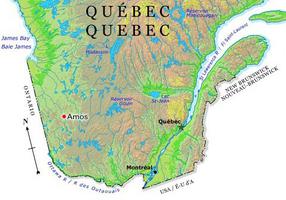 Amos, Qué, Town, pop 12 584 (2006c), 13 044 (2001c), inc 1925. Amos is located 110 km northeast of Rouyn-Noranda in northwestern Québec. It owes its existence to its favourable location in the heart of the Abitibi region at the junction of the Transcontinental Railway and the Rivière Harricana, one of the region's major waterways. The area used to be called Harricana, an Algonquin expression meaning "place where bark dishes are obtained for cooking."

Founded in 1914, Amos became in the mid-1920s the most important town in Abitibi and the county town of this newly settled region of Québec. It took its name from Alice Amos, the wife of Sir Lomer Gouin, premier of Québec. Amos assumed a leading role in the region because of its many sawmills and the surrounding rich agricultural lands lying among the Harricana. It is also the site of a new papermill belonging to Donahue-Normick Inc. A short distance from Amos, the Abitibiwini ("people of the high ground," an Algonquin band) live in the village of Pikogan.