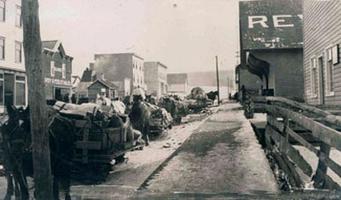 Athabasca Landing in 1910. For 40 years the community was an important transportation centre for Canada's North (courtesy Athabasca Archives) 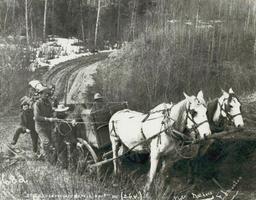 The Athabasca Landing Trail, at one time Canada's busiest northern route, became deeply rutted when wet (courtesy Provincial Archives of Alberta/B5682).
PreviousNext
Athabasca Landing Trail was established 1875 by Hudson's Bay Company between Edmonton and Athabasca Landing to improve and expand northern transportation. Opened in 1876, this 161 km portage, which links the North Saskatchewan River with the Mackenzie River system, played a vital role in the development of northern Alberta, the Yukon and the Northwest Territories. Surveyed in 1879, the trail was Canada's busiest northern route for 40 years, during the transformation of the area from fur-trade monopoly to a modern, diversified economy; the settlement of western Canada; and the evolution of modern transportation.

The development of railways (Athabasca, 1912; Grande Prairie, 1916; and Fort McMurray, 1917-21) diminished the importance of the trail. The trail experienced a brief revival with the building of the Alaska Highway during World War II, but modern highways now bypass most of the historic route. What remains of the trail today begins at Gibbons, Alberta and heads north to Athabasca.