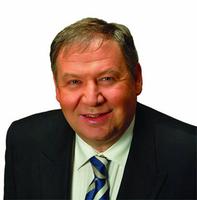 (courtesy of the Office of the Premier of Nova Scotia)

Darrell Dexter, lawyer, politician, 27th premier of NOVA SCOTIA, from 2009 to 2013 (born at Halifax, NS 10 Sep 1957). Darrel Dexter was born into a working class family in Nova Scotia. His father, Elvin, served in the Second World War and was a metal worker. His mother, Florence, raised the family at home. As a young boy, Dexter delivered newspapers and was a fan of the MONTREAL CANADIENS.

Dexter was educated at Dalhousie University in Halifax where he earned degrees in education and law. He also has a journalism degree from the University of King's College in Halifax. In the early 1980s, he served briefly in the Canadian Navy as Command Information Officer for Maritime Forces Pacific.

Dexter first got involved in electoral politics when he won a seat in 1994 on the Dartmouth city council. In 1998, as a member of the New Democratic Party, Dexter was first elected to the Nova Scotia House of Assembly representing Dartmouth - Cole Harbour.

In 2001, Dexter became the party's leader after its first one-member, one-vote leadership convention. After leading the NDP to two second-place finishes in the 2003 and 2006 elections, Dexter led his party to victory in 2009 when the NDP won a majority government. On 19 June he became Nova Scotia's 27th premier and the first NDP premier east of Ontario in Canadian history, succeeding Rodney MACDONALD, the young Progressive Conservative premier whose government was defeated on a non-confidence vote in early 2009.

Dexter presided over four tumultuous years as premier. His government balanced the budget but did so in part by breaking a campaign promise to not raise the Harmonized Sales Tax. He raised living standards for seniors. But he was forced to grapple with Nova Scotia's chronic economic woes, including shutdowns in the pulp and paper sector, which he responded to with controversial subsidies in some areas, but not in others. Escalating health care costs, and the rising demands of the health care unions (which formed much of the NDP's base of support) was a constant source of tension.

In October, 2013, voters defeated Dexter's government after a single term, electing instead the Liberals under their leader Stephen McNeil. Not only was the NDP reduced to third-place status in the legislature, but Dexter even lost his own seat by 21 votes. He resigned as NDP leader on 21 November, 2013.