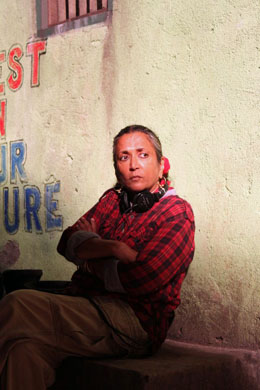 Deepa Mehta on the set of Midnight's Children (photo by Stephanie Nolan, courtesy of Deepa Mehta).

Mehta’s father was a successful movie distributor. She grew up watching films in her native India. After receiving a degree in philosophy from the University of New Delhi, she worked on educational and documentary films for the Indian government. While directing her first film, a documentary about a child bride who had worked for her family, Mehta met Canadian filmmaker Paul Saltzman. They married and moved to Toronto in 1973, where they founded the production company Sunrise Films. Mehta and Saltzman divorced in 1983. She subsequently married producer David Hamilton. They founded the production company Hamilton Mehta Productions in 1996.

After coming to Canada, Mehta wrote for children’s movies while working on various other projects through Sunrise Films. At 99: A Portrait of Louise Tandy Murch (1974), her portrait of a feisty elderly feminist, won a Canadian Film Award for Best Short Documentary. Travelling Light (1986), a television documentary about Mehta’s photojournalist brother, Dilip, was nominated for three  Gemini Awards.

Mehta also directed for television, including episodes of the CBC drama Danger Bay (1984–90), produced by Saltzman, and The Young Indiana Jones Chronicles (1992), for George Lucas Productions.

Mehta’s first feature film, Sam and Me (1991), is the story of an Indian immigrant who befriends an elderly Jewish man in Toronto. It won an honourable mention at the Cannes Film Festival. Mehta used lush imagery in the film to represent emotion, a technique she would use in later films. Sam and Me had an $11-million budget, the highest budget for a female director in Canada at the time. She was then hired to direct Miramax’s Camilla (1994), written by Paul Quarrington and starring Bridget Fonda and  Jessica Tandy.

Mehta then tackled the passion project that would define her career — a trilogy of films that the New York Times described as a “rich, complex exploration of the cultural taboos and tensions at play in the society of her native India.” The first film, Fire (1996), challenges the power imbalance between husbands and wives in contemporary India by telling the story of a love affair between two Hindu sisters-in-law. The film was met with angry public protest in India and drew the ire of Hindu fundamentalists, who pressured the Indian government to ban the film. It was ultimately released unedited in India. It received critical praise worldwide and won numerous awards.

A transnational co-production filmed outside Canada with non-Canadian actors in a language other than English or French, Fire helped shift the conception of what constitutes a Canadian film. It opened the Perspective Canada program at the Toronto International Film Festival (TIFF) and won the award for Most Popular Canadian Film at the Vancouver International Film Festival. This provided some vindication for Mehta, who had been openly critical of Telefilm Canada’s apparent reluctance to back films with ethnically and culturally diverse subject matter.

The second film in the trilogy, Earth (1998), is a love story that follows the struggles of a diverse group of friends during the partition of British India into India and Pakistan in 1947. Following the end of British colonial rule and the creation of two independent states — Hindu-majority India and Muslim-majority Pakistan — over 15 million people were forced to migrate. Sectarian violence erupted, including massacres and rapes. More than one million people died. Based on Bapsi Sidwa’s novel, Cracking India, the film portrays the division of country and friendships during the largest forced migration in human history.

Never one to shy away from controversy, Mehta’s final instalment in the Elements trilogy was Water (2005). It tells the story of socially marginalized widows — some of them children — who are ostracized in conservative parts of India. The film’s production was delayed by violent protesters who threatened Mehta’s life and destroyed film sets in the holy city of Varanasi. The film was finally shot clandestinely in Sri Lanka several years later and went on to receive worldwide acclaim. It was nominated for nine Genie Awards (winning three) and an Oscar for Best Foreign Language film.

When Mehta’s first attempt to film Water was disrupted, she returned to Toronto and made the cross-cultural musical comedy Bollywood/Hollywood (2002). A complete departure in tone and subject matter from her other films, it met with mixed reviews. It also received five Genie Award nominations, including Best Picture, and won for Mehta’s original screenplay. She continued her foray into lighter fare with The Republic of Love (2004), a romantic comedy based on a novel by Carol Shields and starring Bruce Greenwood.

Following the international success of Water (finally released in 2005), Mehta returned to more feminist-centred stories with Heaven on Earth (2008). It follows an Indian woman who immigrates to Canada for an arranged marriage that becomes abusive. Mehta’s script won an award at the Dubai International Film Festival and was nominated for a Genie Award.

In response to audience interest in the plight of widows in India after the release of Water, Mehta produced the documentary The Forgotten Women (2008), directed by her brother Dilip. He also directed Cooking with Stella (2009), which was produced and co-written by Deepa. Cooking with Stella co-stars Lisa Ray and Don McKellar as a Canadian diplomatic couple in India whose housekeeper steals from her employers.

Mehta’s Midnight’s Children (2012), based on the celebrated novel by Salman Rushdie, premiered at TIFF and received eight Canadian Screen Award nominations, including Best Motion Picture. The film tells the story of two children who were born at the dawn of India’s independence from Britain and were switched at birth.

Beeba Boys (2015), loosely based on the true story of a Sikh Canadian gang in Vancouver, premiered to mixed reviews at TIFF. It earned Mehta the $50,000 Technicolor Clyde Gilmour Award from the Toronto Film Critics Association for “enriching the understanding and appreciation of film in Canada.”

Anatomy of Violence (2016), Mehta’s docudrama about the 2012 gang rape of a young woman on a bus in India,  received largely negative reviews. POV Magazine’s Pat Mullen applauded it for combining “the director’s early roots in documentary with the courage of her dramas like Water and Heaven on Earth.” Mehta also directed two episodes and served as creative executive producer of Netflix’s dystopian sci-fi series Leila (2019), which was billed as “the Indian Handmaid’s Tale.”

Many religious and conservative leaders in India see Mehta as a westernized threat to Indian culture. She challenges cultural traditions by using drama to break down stereotypes and give a voice to marginalized individuals. She cites socially responsible filmmakers such as Satyajit Ray, Ozu Yasujiro and Vittorio de Sica among those she admires. TIFF programmer Steve Gravestock has described Mehta’s humanist oeuvre as one in which “intolerance and prejudice are set against the need for understanding.”