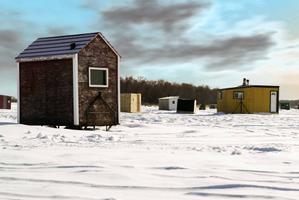 Ice provides a seasonal platform for fishing by netting, spearing and angling. Net, spear and hook were in use winter and summer in northern Europe and North America long before the dawn of history.

Netting
Nets are used by people fishing commercially, or requiring regular supplies of fish for feeding families or dog teams, or supplying fox or mink ranches. They are easiest to set before ice is thick. A line must be stretched 50 m or more under the ice. A series of holes is cut in the ice and a line is passed from one to the next, often by means of a long, straight pole. The line is then used to pull through a rope which, in turn, is used to extend the net, floats and weights beneath the ice.

Another method uses a prairie ice jigger, a sledlike wooden device that slides along the underside of the ice. The jigger is launched under the ice, towing a rope. When the rope is pulled, a lever is raised; when the rope is released, the lever springs back in such a way that it pushes against the ice and jerks the jigger forward. It can be traced by watching through clear ice, or by listening through snow-covered ice. When the appropriate length of rope has been drawn out, the jigger is retrieved through another hole cut over it.

The net is retrieved from the opposite direction when the catch is removed. Nets must be deployed well below the bottom surface of ice or floats may become frozen-in. A rope or net header embedded in the new ice that forms in the hole is almost certain to be cut when the hole is reopened; therefore, headers are best held down by poles extending well into the water.

Fish spearing may date from the Palaeolithic age. North American natives often were accomplished fish spearers; eg, Inuit speared lake trout and arctic char through ice. The fish spear (kakivak) of the eastern Arctic had a central prong to transfix fish and lateral, reverse prongs to hold them. Bone, antler or ivory decoys were dangled to attract cruising fish into range. In Canada, the fish spear persists in the Arctic but in the south is prohibited, except for taking eels wintering in estuaries in the Atlantic provinces, and for game fishing in Québec.

Hand lines varying from special rods and reels to homemade wooden bobbins are used in 3 ways. In one, the angler sits in a shelter and watches the hook, then sets it when it disappears in a fish's mouth. In the second, the angler watches the line to detect motion that indicates a fish is mouthing the hook. Third, the angler jigs the hook, which catches any fish that has taken it.

Set lines are also used. The hook is typically baited with a smelt or minnow. An automatic, spring-loaded reel may be used, or merely a brimbale or tip-up.

Catches range from perch, bass and pike in Lake Erie to Greenland shark on the fast ice off Pond Inlet, inconnu on a quiet channel of the Mackenzie Delta, pickerel in the Bay of Quinte, poulamons (tom cod) at Ste-Anne-de-la-Pérade, and brook trout in Halifax County ponds.

Most Canadians have access to waters inhabited by more than one of the following: lake WHITEFISH, yellow PERCH, PICKEREL (walleye), ling (burbot), northern PIKE and rainbow TROUT.