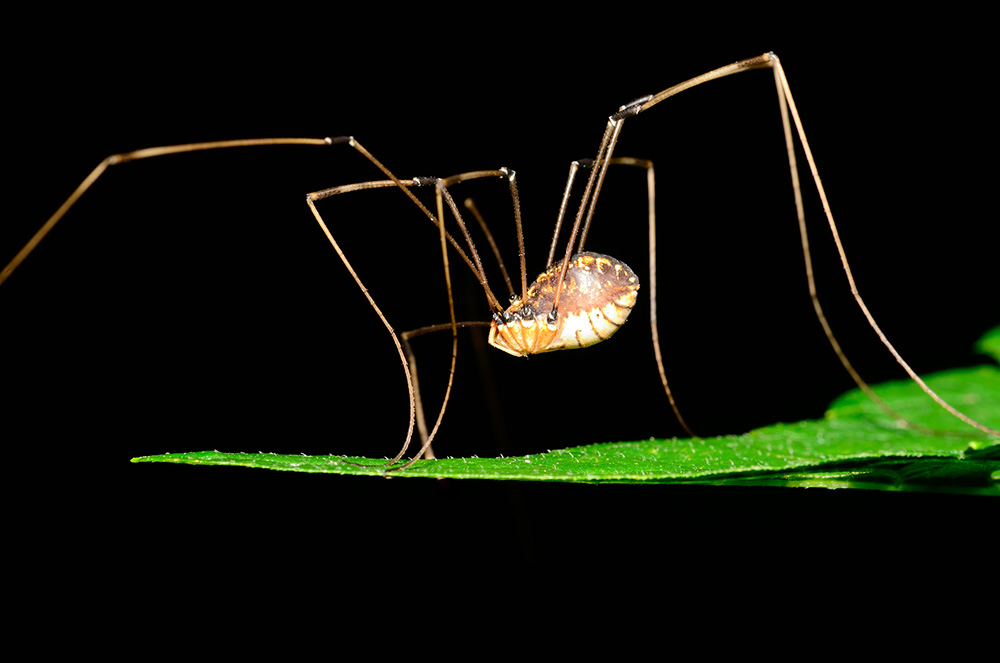 Harvestmen are Arachnids of the order Opiliones. Harvestmen is the preferred term but they are commonly called daddy-long-legs - even though many have short legs. Moreover, "daddy-long-legs" is also used for cellar spiders (Pholcidae) as well as crane flies (Tipulidae).

As with other arachnids, harvestmen have 4 pairs of legs and 2 pairs of mouth parts - chelicerae and pedipalps. Harvestmen are unique among the arachnids in that they possess a pair of scent glands, which are located lateral to the second pair of legs. The glands secrete a liquid or spray used primarily for defence. If a predator grabs a harvestman's leg, a specific joint will usually break (called limb autotomy), leaving a twitching leg but allowing the arachnid to escape. The leg is not regenerated. Harvestmen are distinguished from spiders in that harvestmen have one body part (spiders, 2), 2 eyes (spiders, usual 6 or 8), no silk glands, pinching chelicerae (spiders, fangs) and no venom glands.

Opiliones is the third largest arachnid order after the mites (Acari) and spiders (Araneae). The 6000 described species are subdivided into 3 suborders: Cyphophthalmi, Laniatores and Palpatores. Canada has about 50 species placed in 8 families of Palpatores and 1 family of Laniatores. About 10% is introduced from Europe, including the commonly encountered Phalangium opilio.

Male harvestmen posses a penis and females have a flexible ovipositor. Copulation is brief with minimal courtship. Most species have a one-year life cycle. Most survive winter as eggs or immatures. A couple of Canadian species (Nelima paessleri and Leiobunum elegans) overwinter as adults in aggregations in caves and mines.

Harvestmen are omnivorous. They feed primarily on small, soft-bodied arthropods but will also feed on dead animals and occasionally on juicy fruits. They are harmless to humans.