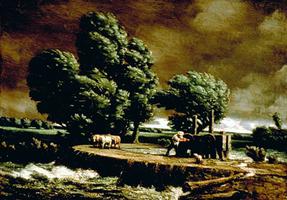 Homer Ransford Watson, painter (born 14 January 1855 in Doon, Canada West; died there 30 May 1936). Co-founder of the influential Canadian Art Club and an early president of the Royal Canadian Academy, and included in the collections of the likes of Queen Victoria and Lord Strathcona, Homer Watson was one of the most accomplished and successful Canadian artists of the late 19th and early 20th century.

Realizing early on that he wanted to be an artist, Watson sought the advice of Thomas Mower Martin and moved to Toronto in 1874. In Toronto, he worked part time with John A. Fraser and Henri Perré at the Notman-Fraser photography studio. He copied paintings at the Toronto Normal School and met other artists, such as Lucius O’Brien. During a trip to New York in 1876, he absorbed the influence of Barbizon school pioneer George Inness and the Hudson River School.

Watson moved to England in 1887 and lived there for four years. In London, he met the painters Sir George Clausen and James Abbott McNeill Whistler, and admired the work of French painter Jean-Francois Millet and other Barbizon school painters as well as influential British landscape painter John Constable (Oscar Wilde, during a trip to Canada in 1882, called Watson the “Canadian Constable”). Internationally famous at the peak of his career, Watson developed a landscape style marked by honesty of purpose and a focus on the moods of nature. Many of his canvases depict the countryside around Kitchener, the trees, fields of grain, grazing cattle: the "Land of Thrift" much prized in pioneer society.

From early on in his career, Watson’s paintings were meticulously detailed, luminous and often possessed a mythic quality. Old Mill and Stream (1879) has a mill in the middle of the picture plane, a stream rushing past; on one side on a road in the foreground are two figures and a horse and cart beneath towering trees. Much of the picture is earth-toned, but the trees are lit from behind by sunlight and the horizon is dissolving in light. The Castellated Cliff (1879), on the other hand, is dark and spooky: two trees jut out from the river bank, blocking the setting sun, while on the opposite bank gnarled trees in fading light are set against a cliff whose blue-grey formations resemble the turrets and battlements of a medieval castle, giving the painting its name. Some of Watson’s later works are more overtly modernist, with a hint of the kind of romantic northern expressionism that had a significant impact on the members of the Group of Seven. Rushing Stream by Moonlight (1905), for instance, has a stream, white-water mirroring the moon’s white light, rushing into the painting’s foreground. The trees on the banks of the stream are dark and pitching, the moon above the dark treeline just visible in a break in clouds. Moonlight, Waning Winter (1924) has a still barren tree in the foreground, the moon bright, almost sun-like, in the sky, casting light down onto a landscape only half-covered in snow. In his later work, Watson moves away from a more idyllic, pastoral vision of nature.

Homer Watson began exhibiting in 1878 but the purchase of his The Pioneer Mill for Queen Victoria at the first Royal Canadian Academy exhibit of 1880 brought early acclaim; the painting is still on view in the private quarters of Windsor Castle. Many significant canvases were completed by the end of the century: A Cornfield (1883), The Flood Gate (1900) and After the Rain (1883). His patrons included Lord Strathcona, governor general of Canada, James Ross, Oscar Wilde and many affluent Canadians. Watson and Edmund Morris founded the Canadian Art Club in 1907, hoping to replace imported European canvases with Canadian ones, and Watson was president until 1911. Watson was president of the Royal Canadian Academy, 1918–21. In 2005, Canada Post issued two postage stamps commemorating the 150th anniversary of Watson's birth, the 125th anniversary of the National Gallery of Canada and the 125th anniversary of the Royal Canadian Academy of Art, depicting Down in the Laurentides (1882) and The Flood Gate (1900–01). Homer Watson’s house in Doon now houses an art gallery which has many of his works in addition to those of the Doon School of Fine Arts.