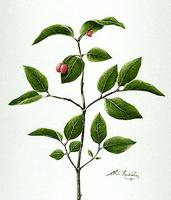 Honeysuckle, common name for plants, usually woodland shrubs, of genus Lonicera, family Caprifoliaceae. Honeysuckle leaves were a favourite goat food, hence the name caprifolium [Lat, "goat's leaf"]. More than 150 species of Lonicera are widespread in the Northern Hemisphere; 9 are native to Canada. They are distributed transcontinentally, from the subarctic to southern Canada. Flowers are in pairs or 6-flowered whorls, and are showy in some species commonly under cultivation, eg, Japanese honeysuckle (L. japonica), woodbine (L. periclymenum), trumpet honeysuckle (L. sempervirens) and Tatarian honeysuckle (L. tatarica).

The most common Canadian species are: L. canadensis, L. dioica and L. oblongifolia, which are red-berried; and L. involucrata and L. villosa, which are black-berried. All of these have yellowish flowers. Seven species, including L. caprifolium (Italian woodbine), L. periclymenum (woodbine honeysuckle) and L. tatarica, have been naturalized in Canada from garden escapes. Woodbine and the related climbing honeysuckles are limited to the mildest regions of Canada. Tatarian honeysuckle is very cold hardy and a valuable prairie ornamental.

Berries are generally nauseously bitter and purgative. North American Indians used berries and root bark for digestive problems and gonorrhea, and as a tonic.