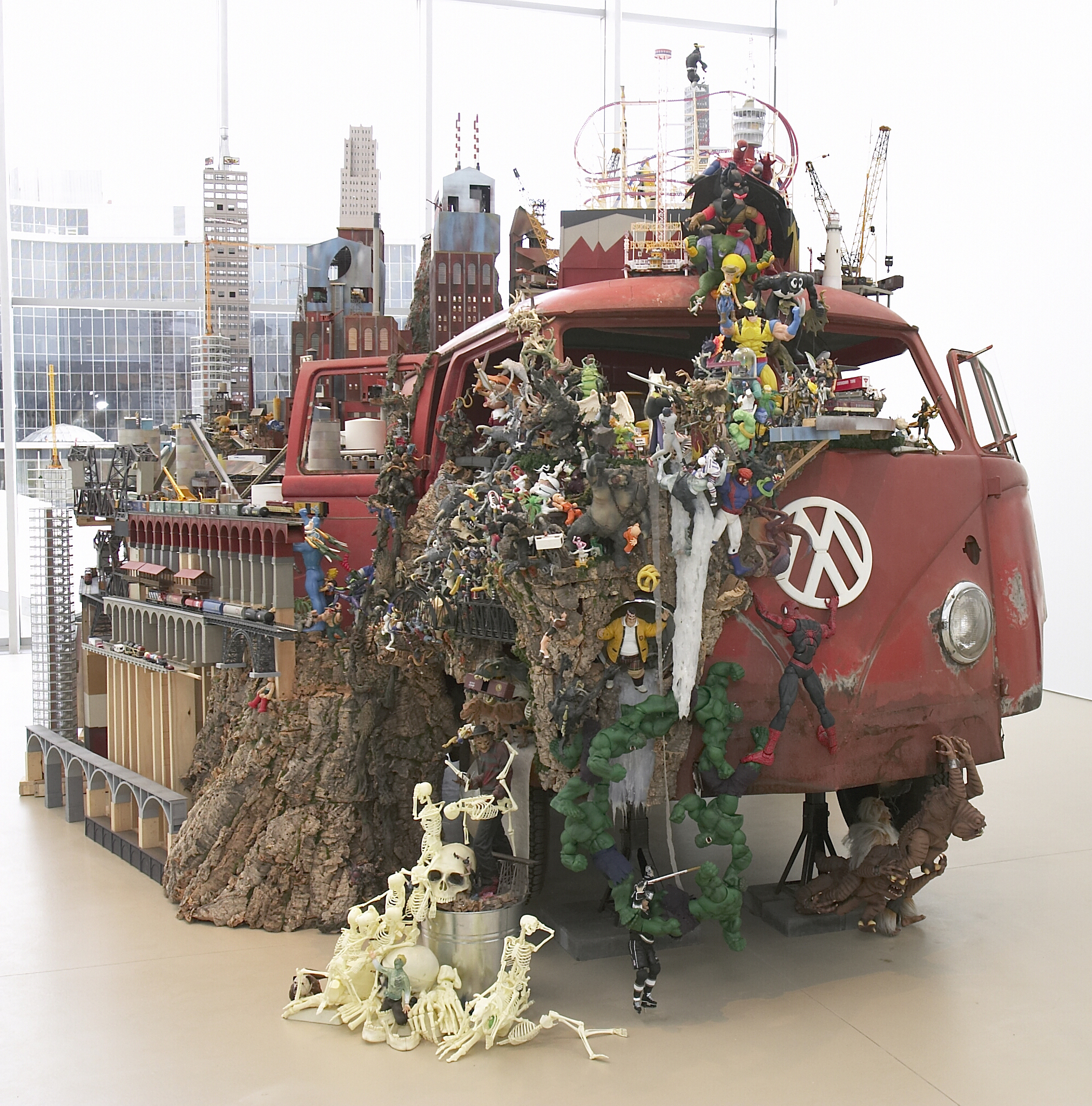 Kim Adams (Canadian b. 1951) Bruegel-Bosch Bus, 1996-ongoing sculpture-installation 1960s Volkswagen bus, figurines, mixed media. Acquired with the assistance of the York Wilson Endowment Award at The Canada Council for the Arts and with funds from The E. Muriel Baker Estate, The Russell Nelson Eden Estate and The Walter and Duncan Gordon Foundation, 2001. Image: Mike Lalich, courtesy of the Art Gallery of Hamilton.

Kim Adams studied painting at the Northwest Institute of the Arts (1974), the Kootenay School of Art (1974-75), and the University of Victoria (1975-77), where he went on to receive an MFA in 1979. By 1976, Adams already had a reputation in colour field painting (abstract paintings in which colours are distributed over the surface of the canvas), but sculpture and installation were his real calling. Despite his formal education, Adams has maintained that much of his inspiration was found outside the classroom. "My research began in high school while I was skipping classes,” Adams once said. “I found street life more interesting." Adams continues to find inspiration in street culture. Since the 1970s he has been documenting images of "street remakes" or vehicles that have been cut away, altered and reassembled to create objects for "buying, selling, living and leaving." For Adams, his research slides are a type of sketchbook in which he can discover the unusual and the delightful, as well as find unique technical solutions for his own work. 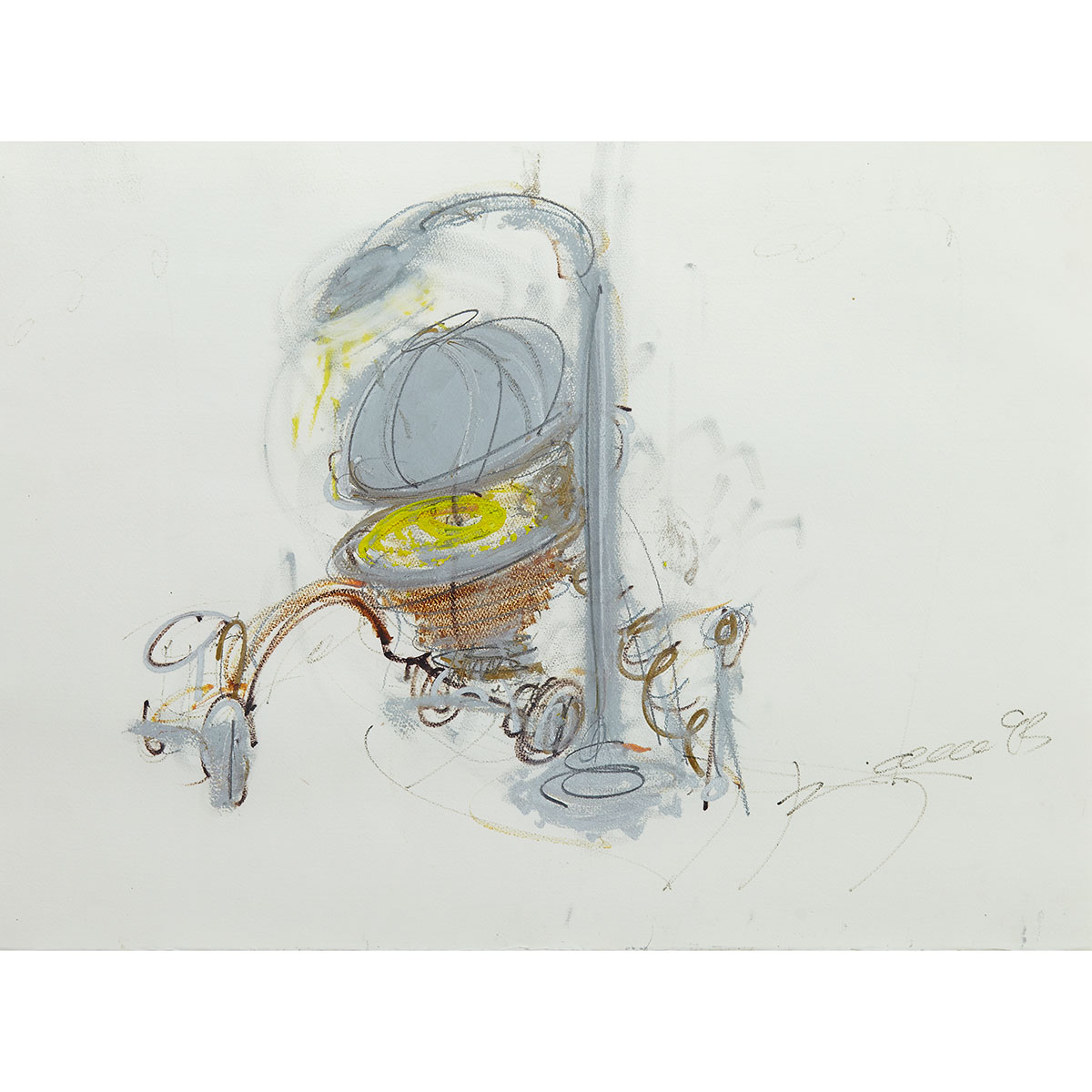 For over 25 years Adams has explored eccentric hybrids of the readymade, sculptural works assembled using found objects rather than creating new ones. His work usually relates to two fundamentals of suburban life: the vehicle and the home. Adams frequently collapses housing and vehicle together so that the home becomes a vehicle and the vehicle becomes a home. The sculptures are generally composed of Canadian Tire products or available commodities adapted from hardware stores and hobby shops. Through their alternation and manipulation, Adams exposes the infrastructures that uphold our values and directs us to the absurdity of our customs. 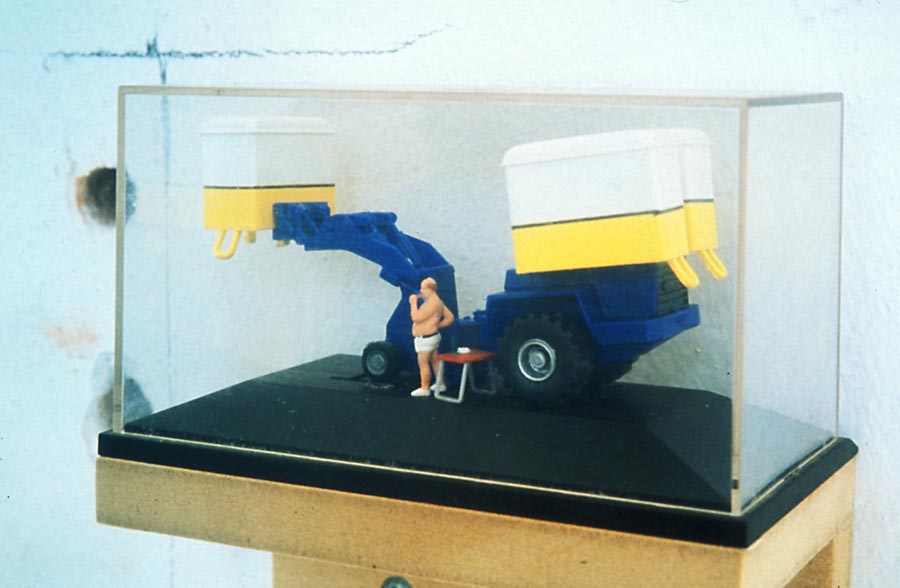 Adams’s sculptural oeuvre consists of three different parts: architectural structures, built often for the artist himself as places to live and work in ("Decoy Homes" (1987) and "Chameleon Unit" (1988)); street actions and events in which the artist works his creations like a carny at a fair ("Chameleon Unit" (1986) and "Gift Machine" (1988)); and miniature models of landscapes and architecture ("Earth Wagon" (1989-91)). These three aspects are interrelated and in many ways interchangeable. His drawings and prints are full of robust energy and offer insight into the ways his sculptural works are conceived. 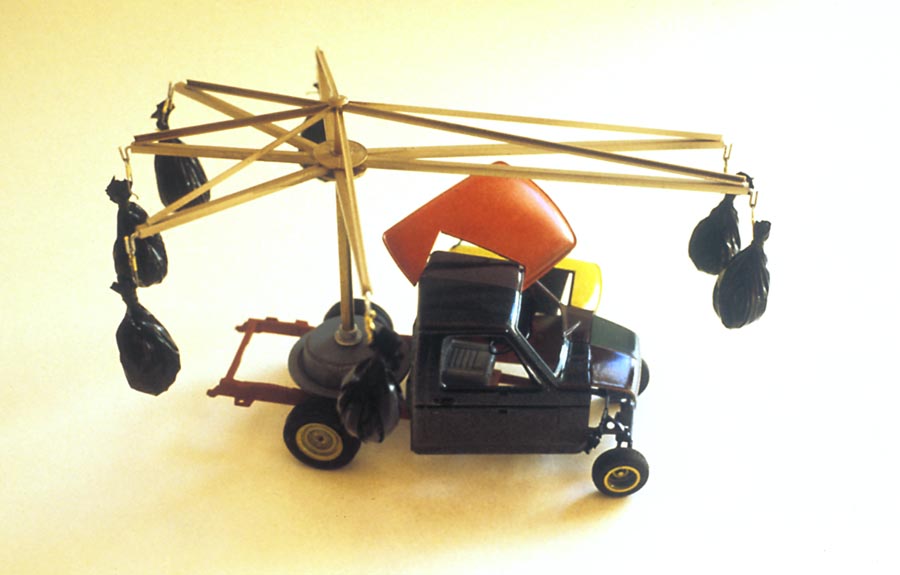 Into the 21st Century

Two major exhibitions of Adams's work were shown concurrently in 2001. A show at The Power Plant in Toronto featured his large sculptures, small models and drawings from 1984 to 2001. This exhibition was arranged in two parts, with the large-scale sculptures displayed on heavy-duty warehouse shelving that turned the gallery into a big box warehouse and another gallery space that contained his models and drawings. The artist is quite comfortable working large or small. He designed the exhibition so as to give the viewer the sensation of shrinking when passing from one gallery to the next.

The other exhibition was at Oakville Galleries and featured Adams's tour de force – "Bruegel-Bosch Bus," an ongoing project now in the collection of the Art Gallery of Hamilton. The base of the piece is a cut-away Volkswagen van. Adams uses model kits, toys and miniature models, all of which expand outwards from the van, to create various realms like those found in an amusement park.

In this colossal work the viewer is witness to grand museums created from old industrial sites, a steel plant spewing out waste, striking industrial workers ready and armed with an ultimatum, a territory where John Lennon teaches peace to frolicking superheroes, and a movie production complex ready for the cameras to start rolling. Like Pieter Bruegel and Hieronymus Bosch, the sixteenth-century artists for which the piece is named, Adams creates landscapes and scenes of daily life that stress the absurd and the vulgar but are also imbued with humour and fine detail. For all of its playfulness there can be no doubting that the "Bruegel-Bosch Bus" strikes at the very heart of contemporary culture, weighing its menaces against its marvels. It serves as a summary of Adams's work to date, bringing together many of his obsessions: the deleterious effects of commodity consumption; unconventional aspects of leisure; community and housing; a nomadic suburban culture-on-the-go; and the unholy alliance of consumerism and waste. 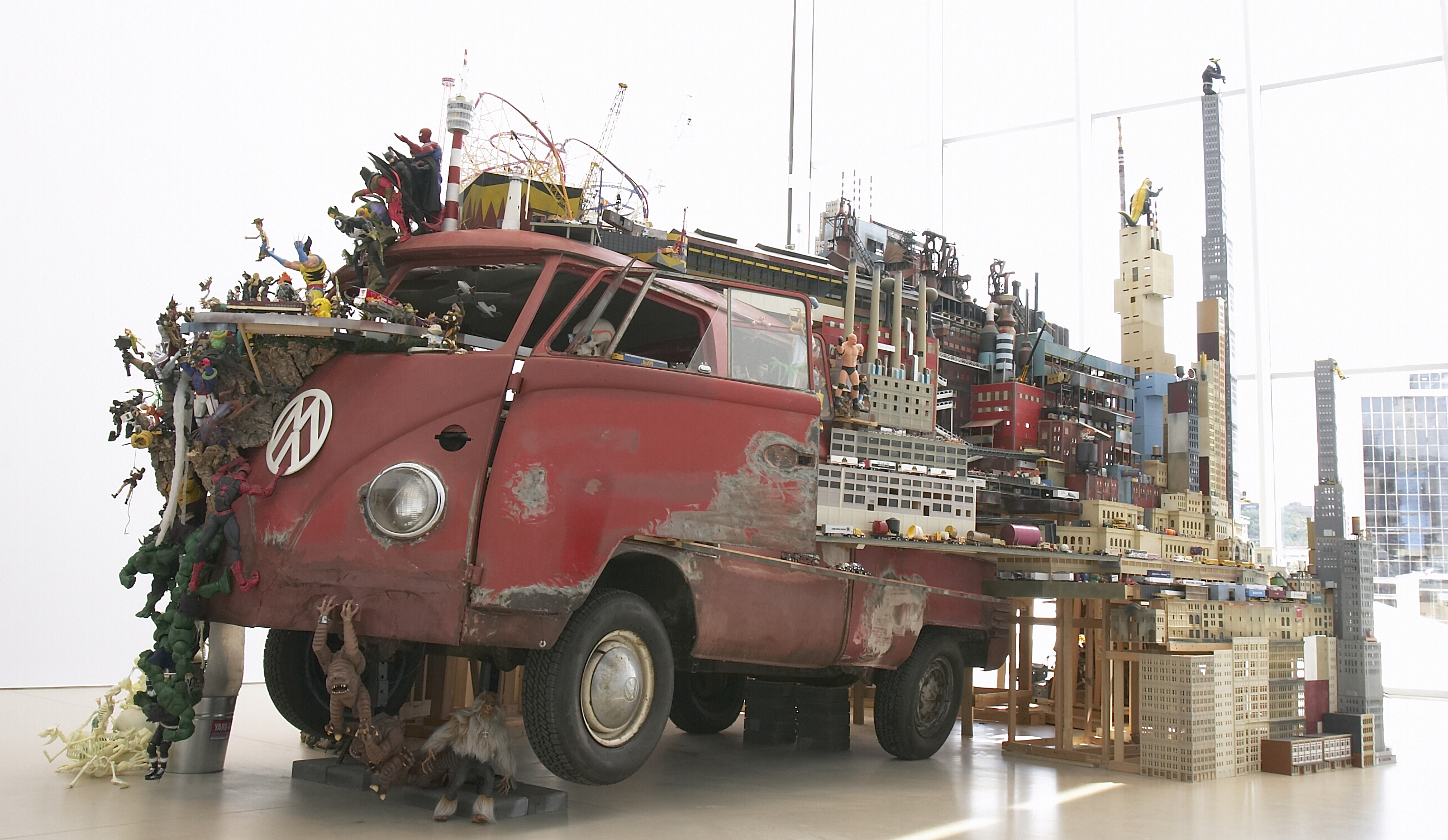 Kim Adams (Canadian b. 1951) Bruegel-Bosch Bus, 1996-ongoing sculpture-installation 1960s Volkswagen bus, figurines, mixed media. Acquired with the assistance of the York Wilson Endowment Award at The Canada Council for the Arts and with funds from The E. Muriel Baker Estate, The Russell Nelson Eden Estate and The Walter and Duncan Gordon Foundation, 2001. Image: Mike Lalich, courtesy of the Art Gallery of Hamilton.

Kim Adams (Canadian b. 1951) Bruegel-Bosch Bus, 1996-ongoing sculpture-installation 1960s Volkswagen bus, figurines, mixed media. Acquired with the assistance of the York Wilson Endowment Award at The Canada Council for the Arts and with funds from The E. Muriel Baker Estate, The Russell Nelson Eden Estate and The Walter and Duncan Gordon Foundation, 2001. Image: Mike Lalich, courtesy of the Art Gallery of Hamilton.
PreviousNext

Kim Adams has been a frequent participant in major solo and group exhibitions in Canada, Australia, the United States and Europe. He has exhibited in some of the most prestigious international art exhibitions including the Sydney Biennale of Contemporary Art, Sydney, Australia; Skulptur Projekte 97, Münster, Germany; and InSite 1997, San Diego, California and Tijuana, Mexico. He is represented in the collections of major museums in Canada and elsewhere and in 2001 he created a permanent outdoor work for the Vancouver Art Gallery. Kim Adams: Models and Toaster Wagon Works was presented at the Durham Art Gallery, Durham, Ontario in 2005. Kim Adams: New Work was on view at the Art Gallery of Ontario in 2013 as part of the Gershon Iskowitz Prize. 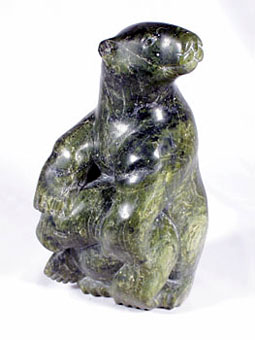