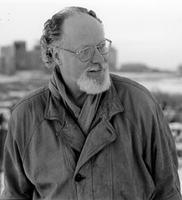 Malcolm Forsyth, composer, educator (b at Pietermaritzburg, South Africa 8 Dec 1936, naturalized Canadian 1974; d at Edmonton 5 Jul 2011). After coming to Canada in 1968 he taught at the University of Alberta in Edmonton until his retirement in 2002. A trombonist and conductor, he is principally recognized as one of Canada's most-performed composers. Rejecting over-intellectualized academic idioms in favour of a more intuitive style that communicates effectively with contemporary listeners, Forsyth has produced richly expressive music for a wide variety of instrumental and vocal media. His most familiar scores include Three Métis Songs from Saskatchewan and concertos for trumpet and piano. In 1989 Forsyth was named Canadian composer of the year by the Canadian Music Council. Electra Rising, a cello concerto composed for his daughter Amanda, was premiered by the Edmonton Symphony Orchestra in 1995. He has received 3 Juno Awards: in 1987 for the orchestral suite Atayoskewin; in 1995 for his Sketches from Natal for string orchestra; and in 1998 for Electra Rising. Retiring from teaching in 2002, he received the Queen's Golden Jubilee Medal for his contributions as an educator and composer. Centrediscs released the 2-CD set on Forsyth in the Canadian Composers Portraits series in 2002. In 2003 he became a member of the Order of Canada and received the Queen's Jubilee Medal. Forsyth's final work, A Ballad of Canada, debuted at the National Arts Centre just weeks before his death.