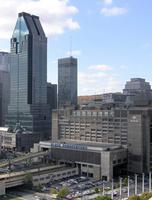 Place Bonaventure, Montréal (designed by Affleck, Desbarats, Dimakopoulos, Lebensold, Sise, predecessor of the ARCOP Group, and constructed 1964-67), is the first multi-use building complex in Canada to create a permanent trade fair with large-scale convention and exhibition facilities. The complex occupies a full downtown city block and incorporates a shopping concourse connecting to subway, railway, and interior and exterior pedestrian systems; an exhibition hall of 250 000 square feet; a merchandise mart of 5 floors providing offices and permanent facilities for manufacturers; an international trade centre; and on the roof, a 400-room hotel. Place Bonaventure contains over 3 000 000 square feet of floor space and was the second largest commercial building in the world when construction was completed.

For project architect Raymond T. AFFLECK, Place Bonaventure was a seminal work. His belief in the dissolution of the Renaissance concept of the architect as autonomous artist led him to favour a process of simultaneous, rather than linear, interaction of owners, architects and contractors in the design and construction of the building. This process also included the relatively unprecedented major participation of a female architect, Eva VECSEI (b 1930), who acted as the head project designer.

The site of Place Bonaventure was opened for development in 1963 by its proprietors, the Canadian National Railways (CNR), who had envisaged future use of the over-track air space and provided knock-out panels in the platforms between the railway tracks to accommodate future foundations. Trains run through the lower levels of Place Bonaventure, to and from Montréal's Central Station located south of the Queen Elizabeth Hotel.

The main structural and finish material of the fortress-like building is concrete, a choice made partly for reasons of economy and availability. Since the architects wanted to provide as much interior exhibition wall space as possible, relatively few openings punctuate the exterior elevations. The ribbed facades have been compared to those of the influential Yale University Art and Architecture building (Paul Rudolph, 1958-64) in New Haven, Connecticut.