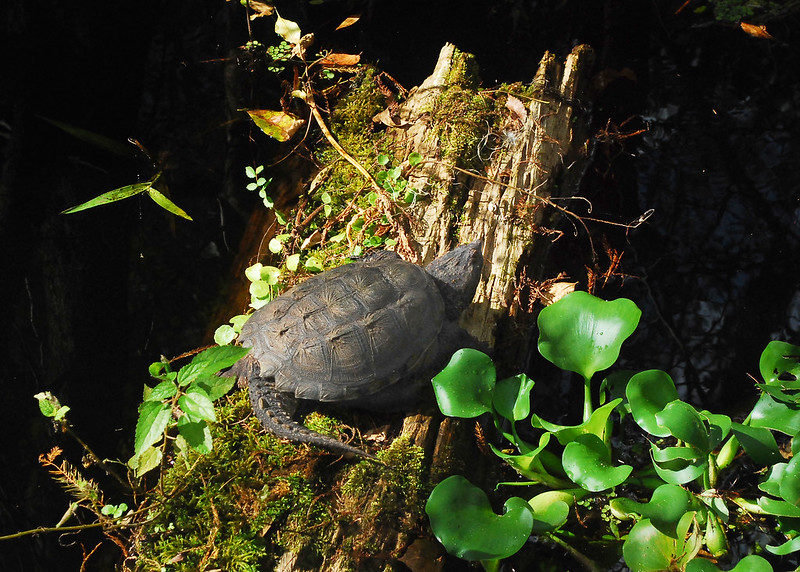 
("Common Snapping Turtle, Chelydra serpentina" by trishhartmann is licensed under CC BY 2.0.)

The snapping turtle has a large head, long neck and hooked upper jaw. In adults, the upper shell is brown, black or green, and sometimes covered in algae. The bottom shell is smaller, cross-shaped and does not cover all the turtle’s limbs. The length of the upper shell is 30–40 cm, with some reaching 50 cm. The tail can grow as long as the upper shell and is topped with dinosaur-like crests. Snapping turtles typically weigh between 9 and 18 kg, but occasionally exceed 35 kg. Males are larger than females, weighing about 5–10 kg more and measuring about 5 cm longer. Snapping turtle hatchlings are less than 3 cm long with soft, ridged shells. By adulthood, these ridges have worn down. 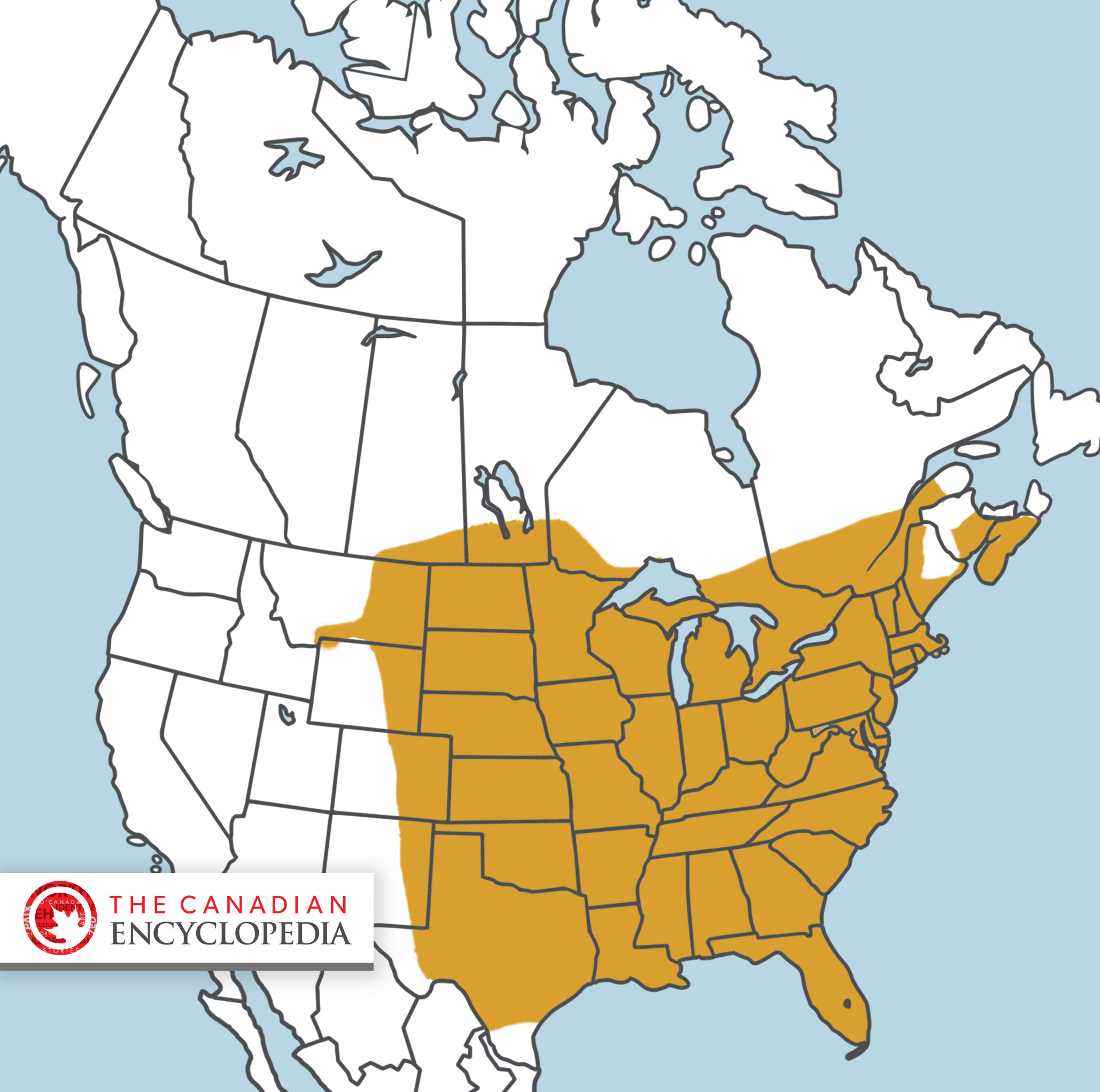 The snapping turtle’s indigenous range is mostly in the United States east of the Rocky Mountains, and as far north as southern Saskatchewan, Manitoba, Ontario, Quebec, New Brunswick and Nova Scotia. It can also be found in pockets from Mexico and Central America to Ecuador. In Canada, snapping turtles number in the thousands. In addition to their native range, people have introduced snapping turtles to other areas, most likely as released pets. As a result, some individuals are found in the wild in Alberta, British Columbia, several western states, Puerto Rico, Guam, China, Japan and Taiwan.

Snapping turtles prefer to live in slow-moving water less than 2 m deep and with a soft bottom, such as mud or dead leaves. They also make use of land up to 500 m away from the water. They can live in altitudes of up to 2,000 m and can tolerate habitats outside their preference, including brackish water (a mix of fresh and saltwater). 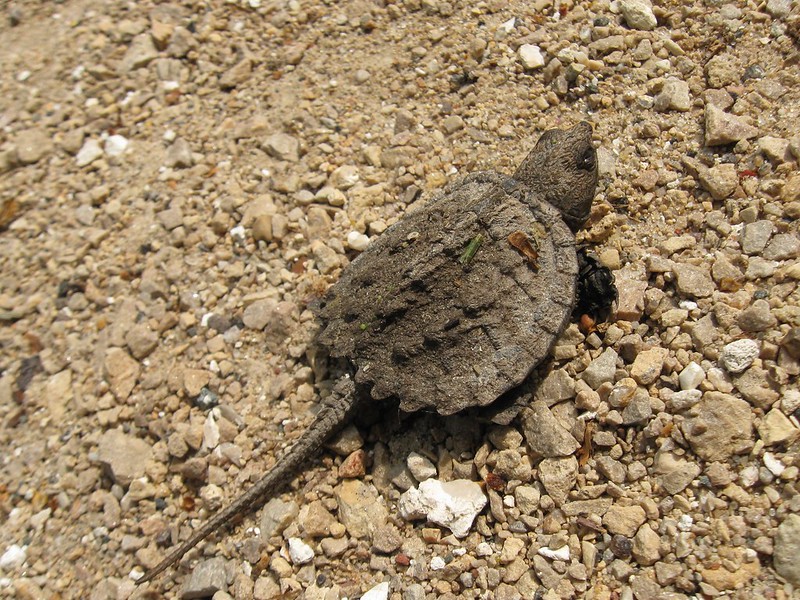 A baby snapping turtle at the University of Wisconsin-Madison Arboretum.

Snapping turtles usually live 25–40 years, sometimes much longer. In warmer climates, females can be sexually mature within 4–8 years. In Canada, it takes 15–20 years. Mating happens in water in early spring. Afterward females seek a suitable nest location. They tend to look for a sunny, well-drained spot in soft ground such as sand or gravel banks. Females have a tendency to return to the same nesting location year after year and may travel over 15 km round-trip to do so. Once they find their nest, females lay between 20 and 45 golf-ball-sized eggs in late spring or early summer. The eggs take between 65 and 95 days to hatch. This incubation period is sensitive to temperature. If the summer is too cold, no eggs will hatch. In addition, hatchling sex is determined by the temperature at which the eggs are kept. This is called temperature-dependent sex determination. Lab experiments have shown that eggs kept at 20°C or 29–31°C become female, while temperatures of 23–24°C produce males. Intermediate ranges produce mixed sex ratios. After incubation, the hatchlings break out in late summer or early fall and instinctively move towards water.

Snapping turtles are omnivores and will feed on just about anything, plant or animal, dead or alive. They often burrow at the bottom of bodies of water to ambush animal prey. Snapping turtles hibernate in shallow water, often in the same location every year.

Snapping turtles only bite if they are confronted and harassed on land. In the water, they usually swim away from threats. On land, however, they are too slow to escape, and their bottom shell is too small to retreat into. Therefore, in these situations, they may resort to biting for self-defense. Even then, injuries are usually not severe, because snapping turtles don’t have enough strength in their jaws to bite through bone.

Turtles, including snapping turtles, are significant to many Indigenous peoples, including the Anishinaabe and Haudenosaunee. Its shell is used for ceremonies, crafts, decoration and as a percussion instrument. Its meat is frequently used in soups and stews. However, eating its meat today can be dangerous, because it may contain high levels of environmental contaminants. Snapping turtles are also valued as pets and for medicinal purposes.

Snapping turtle harvesting increased sharply in the early 21st century. In most cases, they were harvested in the United States for export to East Asia. Today, harvesting snapping turtles is banned in Canada and about half the states in its American range.

A snapping turtle at the Blue Hills Reservation, Massachusetts.

Even though snapping turtles are abundant and highly adaptable, they are very sensitive to increases in adult mortality because their reproductive rate is low. A Canadian study showed that only about 1 in 1,400 eggs reach adulthood. This is largely due to predators that eat snapping turtle eggs and hatchlings. These include raccoons, foxes, otters and mink. Snapping turtles also face threats from humans. Urban and agricultural development reduces the habitat available to them and often involves new roads. Road mortality is common because snapping turtles are slow and often cross roads to reach nesting or hibernating sites. In addition, the soft gravel shoulders of roadsides make attractive nesting sites, resulting in female mortality and easy predation of eggs and hatchlings. Snapping turtles also have an exaggerated reputation for aggression and predation on waterfowl and fish. This leads some people to try and harm them in many ways, including some drivers who intentionally run them over. Finally, many smaller threats have a cumulative effect, for example, chemical contamination, fishing bycatch, boat collisions, dredging and water level management (such as flooding areas for a dam).

Due to their wide range and adaptability, snapping turtles are not considered at risk by most authorities. The International Union for the Conservation of Nature (IUCN) lists the species “Least Concern.” However, many local populations are declining. For this reason, the Committee on the Status of Endangered Wildlife in Canada (COSEWIC) listed the Canadian population as “Special Concern” in 2008 and placed it in schedule 1 of the Species at Risk Act in 2011. This means that it may become endangered or threatened. In many localities, measures are being implemented to help reduce human impacts. These include the installation of fences along roads and eco-passages such as culverts which allow safe crossing.