Sovereignty is an abstract legal concept. It also has non-legal (political, social and economic) implications. In strictly legal terms, it describes the supreme power or authority of the state. It represents the highest source of the law. This strictly legal meaning is different from more popular usages. For example, one could argue that the Canada-United States free trade negotiations in 1986–88 threatened Canada’s economic or cultural sovereignty. But this would be a question of political rhetoric rather than legality.

For Canada, the historical roots of legal sovereignty go back to the early 17th century. There were constitutional battles between king and Parliament in England. Royalists claimed that executive powers (known as prerogative powers) were immune from legal control or review by other state authorities (judicial or legislative). But Chief Justice Sir Edward Coke rebuked this idea. In Coke’s judgment, the king (or sovereign) was not under any man but was nevertheless “under God and the Law.” (See also: Magna Carta.)

The concept of sovereignty in Canada concerns the relations between the executive, legislative and judicial branches of government. English constitutional theory — derived from Coke and refined by Albert Venn Dicey — proclaimed the sovereignty of Parliament. This meant that there was no law that Parliament could not make or unmake. Therefore, there was no distinction between the law of the constitution and any other law. It also meant the courts did not have the power to refuse to apply any law on constitutional grounds.

The House of Commons of Parliament Building, Ottawa. Photo taken on: August 23rd, 2011

The sovereignty of Canada’s Parliament was “received,” or carried over, into Canadian constitutional law. This happened with the enactment of the British North America Act, 1867. There were some legal anomalies, as the new Canadian Parliament was still legally subordinate to the British Parliament. For example, Canadian courts were subject to review, on appeal, by the Judicial Committee of the Privy Council in England. At the time, British institutions had legal priority over British Dominions, including Canada.

In the British Empire in the 1920s and 1930s, Dominion status evolved to include legal sovereignty and self-government. This happened within the new British Commonwealth. The Statute of Westminster in 1931 made Canada fully independent in legal terms. It became sovereign in relation to Great Britain. Since then, legal relations between Canada and Great Britain have been conducted through international law — the law between sovereign states — and not by constitutional law. The Constitution Act, 1982 removed the last elements of British control, such as the power to amend the constitution.

In Canadian constitutional law today, the concept of sovereignty presents two distinct problems. The first relates to the division of law-making authority between the federal and provincial governments. (See also: Distribution of Powers.) The federal and provincial legislatures each have absolute, sovereign law-making ability. These powers are granted to them under the Constitution Act. ( See also: Peace, Order and Good Government.) In case of conflicts over jurisdiction, the courts can rule on the source of sovereign power (federal or provincial, as the case may be).

A second problem relates to the legality of the “received” notion of the sovereignty of Parliament. In 1787, the United States’ Constitution established the notion of a constitution as the “supreme law of the land.” It bound executive and legislative authority alike. The Canadian Charter of Rights and Freedoms (1982) entrenched certain fundamental principles to limit all legislatures. By the end of the 20th century, Canadian constitutional law essentially rejected the “received” English concept of the sovereignty of Parliament. Instead, it now favours a “received” US concept of the supremacy of the law (the constitution).

Sovereignty of Indigenous Peoples in Canada

In the United States, Native American (or “Indian”) tribes are seen as “domestic, dependent, sovereign nations.” They have the inherent right to govern within their reservations. They can make laws, establish courts and enjoy immunity from external lawsuits. This doctrine of domestic sovereignty has never been applied to Indigenous peoples in Canada. However, many argue that under international law the same approach should apply. (See also: Indigenous Self-Government in Canada.)

In 2007, the United Nations Permanent Forum on Indigenous Issues was adopted by the United Nations Declaration on the Rights of Indigenous Peoples (UNDRIP). Canada at first opposed the document. This was because of issues concerning land disputes. (The declaration’s clauses about the duty to consult could impact resource development.) UNDRIP took two decades of work by Indigenous peoples around the world. Canada initially supported this work. Its rejection of it caused a ripple of unrest. In 2010, Canada joined the other Anglo-settler countries of Australia, New Zealand and the United States in endorsing the UNDRIP as an “aspirational” document. After a change in federal government, Canada signed UNDRIP in May 2016. It has yet to be seen how Canada will implement this agreement. 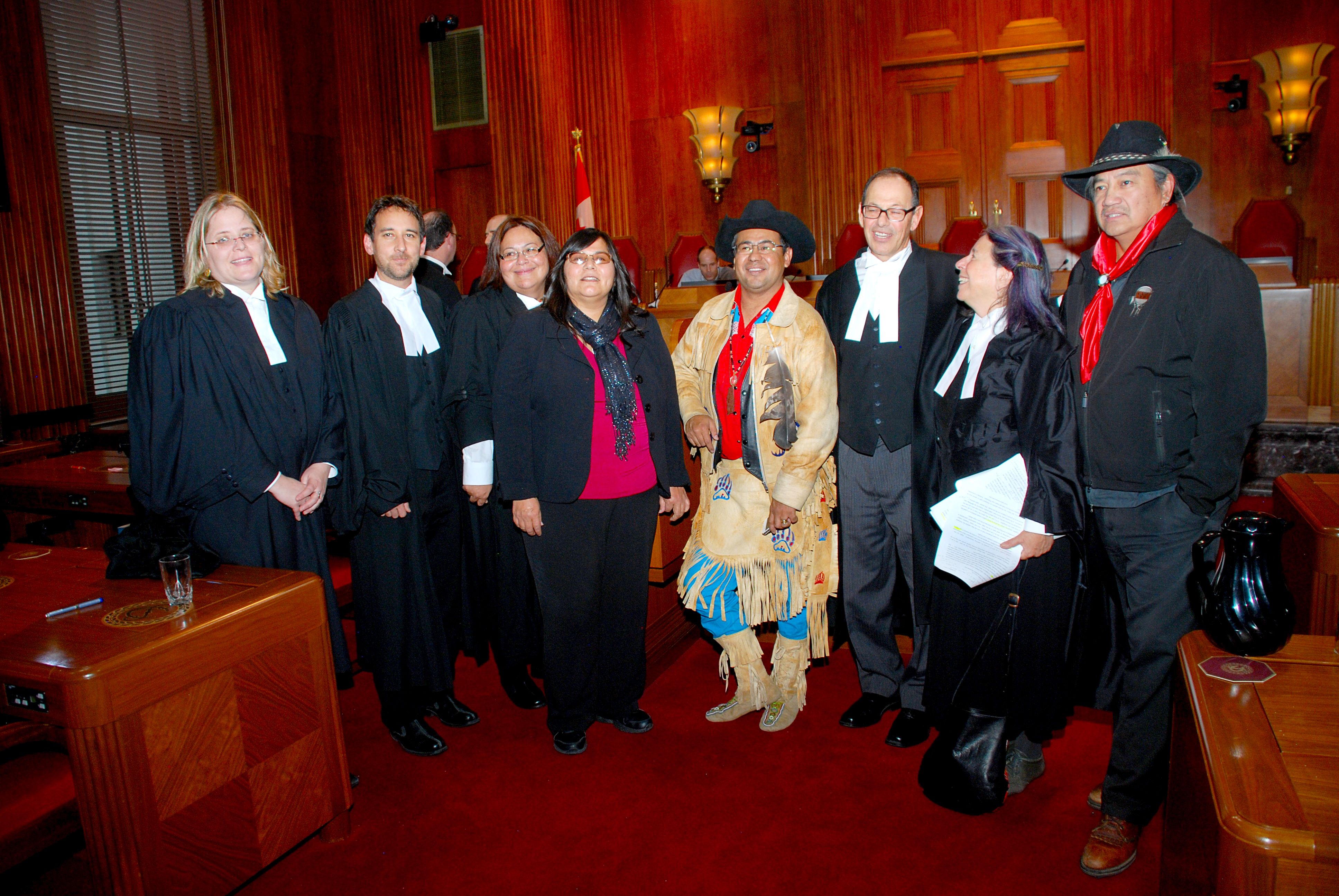 On 26 June 2014, the Supreme Court of Canada issued an unprecedented decision granting the first declaration of Aboriginal title in Canadian history.

The Question of Sovereignty in Quebec

Since the Quiet Revolution in the early 1960s, there has been debate over Quebec’s constitutional role within Canada. In his 1967 manifesto, Option Québec (An Option for Quebec), René Lévesque introduced the concept of sovereignty-association. He saw it as the end goal of Quebec separatism. The idea was for an association between the Quebec and federal governments. It would evolve from an agreement under international law. It would be limited to the economic domain.

In October 1978, when Lévesque was premier of Quebec, he laid out the requirements for sovereignty-association. The document was called the White Paper on Sovereignty-Association. It called for a common monetary system with the rest of Canada and a reorganization of the Bank of Canada. The bank would be split into new common institutions. These would include a central monetary authority. The White Paper also called for a joint free-trade zone and a common external tariff. It allowed for the free passage of goods and people between Quebec and Canada. It also allowed for a variety of special agreements concerning jobs and immigration. (See also: Quebec Immigration Policy.) A community council would settle any disputes. It would be composed of an equal number of ministers from each side. It would be presided over alternately by a Canadian and a Québécois. Sovereignty-association, in the view of the White Paper, was not an end in itself. It was a means by which Quebec could freely direct its own affairs. Quebec would enjoy the economic advantages of the federal union and the benefits of political independence.

After the unsuccessful Quebec referendum of 1980, the use of the term sovereignty-association declined. The simpler term sovereignty became more common. In the Quebec referendum of 1995, the question no longer mentioned “association.” It instead proposed an economic and political “partnership” with the rest of Canada. In the 1995 referendum, Quebec could have agreed to sovereignty if the Yes side had won and negotiations with Canada had failed. Sovereignty-partnership was defined more as a form of political independence. Sovereignty-association, in contrast, meant a new agreement on Confederation.

In terms of international law, sovereignty denotes the legal personality of a state. Only states are persons at the level of international law. In this context, a state’s sovereignty is expressed in three ways. First, through its legal control of territory, territorial waters and national air space, and its legal power to exclude other states from these domains. Second, through its legal power to represent the claims and interests of its citizens with other states. And third, through its representation in international arenas such as the  United Nations and the World Court.

These theories of state sovereignty in international law can be traced back to the Westphalia peace settlement of 1648. It ended the Thirty Years War in Europe. Through this treaty, the nation state emerged as the dominant institution of international relations. It displaced the medieval model in which religious figures were dominant.