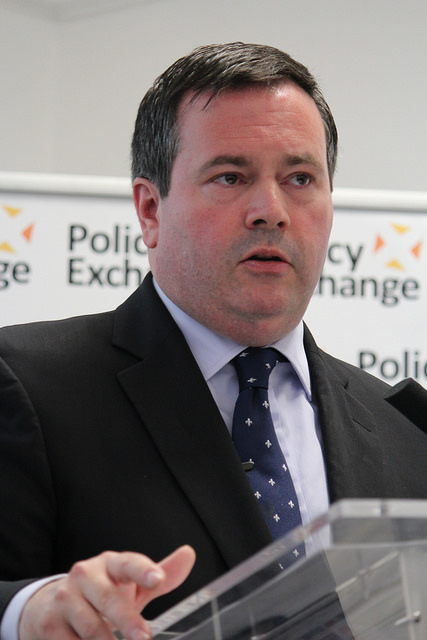 Jason Kenney, MP, speaking at the awarding of the inaugural Disraeli Prize, on16 June 2014.

The PCs reigned in Alberta’s Legislative Assembly continuously from 1971 until 2015, making them the longest-lasting government in Canadian history (see Provincial Government).

With the gradual decline of the Alberta Social Credit Party, after 1982 the opposition was led either by the NDP or the Liberals. For several years, the PCs faced no serious challenges from the political right. Beginning in the 1990s, however, a western conservative movement led at the federal level by the Reform Party reinvigorated the right. New provincial parties emerged, beginning with the establishment of the Alberta First Party in 1999, followed by the short-lived Alberta Independence Party in 2001. These were followed by the Alberta Alliance Party in 2002, which modeled itself off the fiscally conservative Canadian Alliance (itself a rebranding of the federal Reform Party).

In 2007, the Wildrose Party of Alberta emerged, promoting an agenda of staunch conservatism in both fiscal and social policy areas. Its initial platform called for the province to opt out of the Canada Pension Plan and end provincial healthcare premiums (see Health Policy). The party also viewed traditional families as a “cornerstone of civilization” and sought to end public funding for non-therapeutic abortions. (The party would later walk back its stance on abortion.)

By the time of the 2012 election campaign, Wildrose had become a serious threat to the PCs, with some polls indicating they would form the next government. The PCs ultimately retained their majority in the legislature, but Wildrose — then under the leadership of Danielle Smith — displaced the Liberals as the leading opposition party.

The result was disappointing for Wildrose supporters and representatives. Some questioned the Wildrose Party’s viability when former federal cabinet member Jim Prentice took control of the government in September 2014. In the following months, several Wildrose MLAs, including Smith, crossed the floor to join the PC majority.

By 2015, however, Prentice’s government was losing ground in the polls, largely due to the drastic financial constraints it faced as a result of the sudden decline in oil prices ( see Petroleum Industries). The NDP under Rachel Notley swept to power in May of that year, ending 44 years of PC rule.

With the PCs and Wildrose both in opposition, several political operatives considered the idea of a merger. In the summer of 2016, Jason Kenney, a former cabinet member in the Stephen Harper government (2006–15), announced his intention to return to Alberta and make the merger a reality. Kenney ran for PC party leadership on a “unite the right” platform, calling for a Wildrose–PC merger to face down the NDP majority. By May 2017, he had won the leadership and entered negotiations with Wildrose leader Brian Jean on the formation of a United Conservative Party.

On 22 July 2017, the membership of both parties overwhelmingly ratified the merger, with 95 per cent voting in favour. The newly formed party immediately formed the official opposition, holding 25 of the 87 seats in the Legislative Assembly.

That October, Kenney beat Jean to secure leadership of the UCP, winning 61 per cent of the vote. 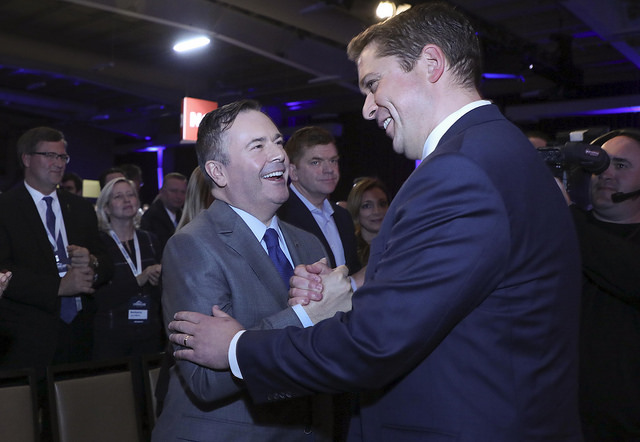 The UCP held its first annual general meeting in Red Deer in May 2018, where members elected the party’s officers and board of directors.

Polls conducted in late April 2018 showed strong support for the new party, with 48 to 53 per cent of decided voters planning to vote for the UCP in the next provincial election, compared to 29 to 35 per cent for the NDP.

In economic policy, the party has stressed that it would prioritize job growth and has aligned itself closely with the province’s oil sands industry. Notley’s government has advocated strongly for the industry as well, particularly by pushing for the expansion of pipelines, but also imposed a carbon tax of $30 per tonne of CO2 emissions. In March 2018 Kenney pledged to dismantle the tax and claimed that his government would push more aggressively for pipeline expansion. In May, Kenney said he was in favour of a carbon tax on major CO2 emitters, such as power plants and oil sands operations.

Kenney has also signed a pledge from the Canadian Taxpayers Federation to balance the province’s budget within his first term in office.

Kenney drew criticism for comments he made shortly after his election to UCP leader on the subject of Bill 10, which mandates all school boards to allow students to establish gay-straight alliances. Kenney claimed that he would not repeal Bill 10 but insinuated that schools should notify parents of their children’s involvement, saying “I don’t think it’s right to keep secrets from parents about challenges their kids are going through.”

When advocates in the LGBTQ2 community expressed outrage that his party might encourage schools to reveal students’ sexual identities to their parents, Kenney issued another statement, saying, “Some are falsely claiming that I want to force schools to ‘out’ children to their parents. This simply is not true.”

The issue has nonetheless remained contentious. In the fall of 2017, the Notley government passed legislation making it illegal for schools to notify parents if their children join a gay-straight alliance (see LGBTQ2S Rights in Canada). The UCP membership openly rebuked the NDP legislation at their first AGM, voting for a resolution that would mandate disclosure. When questioned on the resolution, Kenney downplayed its significance and claimed it did not compel the party to change the existing law.

During the 2019 election campaign, the UCP, led by Jason Kenney, held a strong lead against Premier Rachel Notley and the NDP. Polled voters seemed to believe that the UCP was the most likely to get pipelines built and solve the province’s economic problems. The party’s campaign platform focused on reduced spending and taxes, including eliminating the carbon tax (see Carbon Pricing in Canada) and lowering the corporate tax rate from 12 to 8 per cent. In a bitter campaign, the NDP warned that the UCP would not protect the rights of minorities or LGBTQ2S groups, pointing to the resignation or expulsion of several UCP campaign workers and candidates due to homophobic or Islamophobic comments. This approach was unsuccessful, however. On 16 April 2019, Kenney and the UCP won a majority government, defeating Notley and the NDP, who will form the Official Opposition.