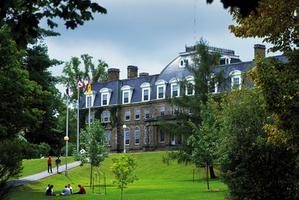 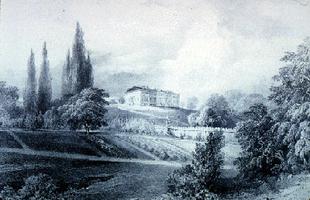 King's College in Fredericton, NB, like many early universities was set in an idealized rural setting. It is now part of the University of New Brunswick (courtesy Metropolitan Toronto Library).
PreviousNext

The University of New Brunswick, Fredericton, was founded in 1785 as the Provincial Academy of Arts and Sciences. It is a multidisciplinary institution noted particularly for engineering, forestry, science and the liberal arts. Modelled on the Tory and Anglican ideals of King's College, New York, the academy was tempered by its LOYALIST and wilderness beginnings. It was an early rival to King's College, Windsor, NS, and although enjoying provincial government support, it did not receive a charter until 1800, when it became the College of New Brunswick. In 1828 it received a royal charter as King's College and in 1859 was reconstituted as University of New Brunswick. Religious qualifications were abolished in 1846 and women were admitted in 1886. The early curriculum stressed a classical education, but by the mid-19th century progressive educators such as William Brydone JACK were introducing the newest scientific disciplines. Although financially limited, the institution was regarded as second only to the UNIVERSITY OF TORONTO during the late 1800s.

Gradually, UNB expanded its educational repertoire. In 1887, the four-year program was introduced and, in 1891, a Bachelor of Science degree was added to complement the traditional BA. Just after the turn of the century, the foundations were laid for three more major faculties: Law, Engineering and Forestry.

The post-First World War era brought the first great expansion of the physical facilities of the campus. In 1920, UNB consisted of the Sir Howard Douglas Hall (Old Arts Building), the Science Building, the small Observatory, a small gymnasium and the Dominion Entomological Laboratory. By 1931, Memorial Hall, a modern Library and a Forestry and Geology Building had been added. The first university residence was a gift from Lord Beaverbrook who, growing up in New Brunswick as William Maxwell AITKEN, studied law, and over the succeeding years developed an increasing interest in the welfare of the university. Other buildings brought into being through his efforts and those of his family were the Lady Beaverbrook Gymnasium, Aitken House, Ludlow Hall for the Faculty of Law, and the Aitken Centre. In 1947, his Lordship became the University's Chancellor, to be succeeded by his son, Sir Max Aitken, in 1966 and in turn by Lady Violet Aitken, the wife of Sir Max, who served until 1993.

After the Second World War, returning veterans pushed registration to over 770 in 1946, almost double the number enrolled in 1941. With this increased student population came a commensurate increase in faculty and course offerings, and a surge of building activity from 1953 to 1977 that transformed the campus. The year 1964 brought three important developments: Teachers' College (the old Provincial Normal School) was relocated on the campus to become incorporated into an enlarged Faculty of Education in 1973; ST THOMAS UNIVERSITY, a small, independent liberal arts college, also relocated on campus, moving from Chatham and affiliating with UNB; and a second UNB campus was established in Saint John.