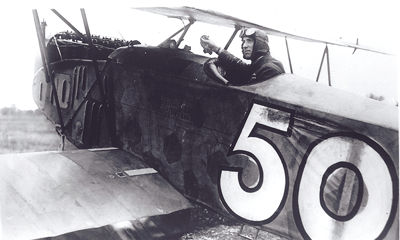 Billy Barker was born on a farm near Dauphin, Manitoba, the eldest child of George and Jane (née Alguire) Barker. He grew up in a frontier community, learning to ride and to shoot. He was a skilled marksman with a rifle, particularly adept at shooting from horseback. Barker attended the Dauphin Collegiate Institute where he was a good student, but his education was cut short in grade 11 by the outbreak of the First World War.

Billy Barker volunteered for the First Canadian Mounted Rifles in November 1914 and was sent with his regiment to Shorncliffe Camp in England. In September 1915, the Mounted Rifles were sent to the trenches of the Western Front to fight as infantry. Barker served with a machine gun crew in the Ypres salient of Belgium.

In March 1916, Barker transferred to the Royal Flying Corps (the RFC would merge with the Royal Naval Air Service in 1918 to form the Royal Air Force). He was initially posted to No. 9 Squadron as an observer manning a Lewis machine gun in a two-seater BE2 aircraft.

He was commissioned as a second lieutenant in April 1916. Serving with No. 4 and then No. 15 Squadron — still as an observer and gunner — Barker downed two German planes. For his skill with a machine gun and for bold reconnaissance work, during a period in which German Fokker fighter planes were preying on the British two-seaters with horrific success, Barker was awarded the Military Cross.

In November or December 1916, Barker was sent to England for pilot training. He showed an exceptional aptitude for aviation, making his first solo flight after only 55 minutes of dual instruction. He received his pilot's wings, and on 14 February 1917, became a flying officer. By 23 February he was in France, posted to No. 15 Squadron, receiving the rank of captain by the end of May. He was awarded a bar to his Military Cross for continued bravery in the air before he was wounded in action by artillery fire on 7 August.

The following month, the injured Barker was posted to England as an instructor. Yearning to return to combat, he successfully applied for transfer, and was given command of A Flight of No. 28 Squadron. He was back in France in October, flying a Sopwith Camel, a British fighter that matched the best of the German planes. In the first week of his return to the Western Front, Barker shot down three enemy fighters.

On 7 November 1917, Barker's squadron, commanded by Major Hugh F. Glanville, was ordered to Italy. It would serve as part of Sir Herbert Plumer’s British force sent to aid the Italian army after it had been defeated by the Germans and Austro-Hungarians at Caporetto. Barker became the most successful pilot on the Italian Front. It was in Italy that he gained the status of “ace,” a title bestowed unofficially on a pilot with at least five air victories.

Barker was learning the tactics that were vital to success and survival in aerial dogfights. He was an audacious and determined pilot who dared to fly at dangerously low altitudes to strafe and bomb enemy positions. He was courageous in individual combat but was never known as a “trophy hunter” — a pilot who might rack up enemy kills, simply for the sake of it.

Like other fighter pilots, he would go on lone scouting patrols, but he gained a reputation as a conscientious officer, committed to teaching and guiding newcomers to his squadron. He was also a team player, willing to share credit for his victories with other pilots. Barker’s leadership qualities enabled him to devise a strategy relying on teamwork for attacking well-protected observation balloons. It had unprecedented success, and Barker’s squadron began adding downed enemy balloons to its growing list of air victories.

By the end of March 1918, Barker had accumulated 22 victories and had been awarded the Distinguished Service Order (DSO) and a second bar to his Military Cross. But when his squadron commander, Hugh Glanville, was posted to another unit, Barker was passed over for command of No. 28 Squadron. Disappointed, he requested a transfer and was sent to No. 66 Squadron.

By late July, Barker had increased his victory score to 43 while fighting on the Italian Front. He was awarded a bar to his DSO, promoted to major and given command of the newly formed No. 139 Squadron in northern Italy. The French government also awarded him the Croix de Guerre medal in May.

In a clandestine operation, Barker and another officer dropped an Italian spy by parachute on a secret location behind enemy lines. For that, the Italian government awarded him its Silver Medal for Military Valour. After further missions, he would later receive a second Italian Silver Medal. Barker was also Mentioned-in-Dispatches three times.

In September 1918, Barker was sent to Hounslow, England, to take command of a school for aerial combat training. However, he requested a brief tour of duty on the Western Front in France and Belgium, explaining to his superiors that he would be better qualified as an instructor if he had experience against the newest German aircraft. His request was granted, and he went to France to join No. 201 Squadron for 10 days. Flying a new Sopwith Snipe, Barker was relatively free to range at will over the front, seeking enemy aircraft wherever he thought he might find them. Even so, he didn’t see any combat until the day when he was due to return to Hounslow.

On 27 October 1918, Barker took off from a French airfield for the flight to England. Over the Mormal Forest, he shot down a German reconnaissance plane and then suddenly found himself the quarry of a squadron of German fighters. Ground reports claimed there were 60 enemy planes, but evidently 15 broke away from the main formation to attack Barker. In one of the most dramatic dogfights of the war, Barker’s pilot skills, marksmanship and a good measure of luck enabled him to prevail against seemingly impossible odds. He was wounded several times and his plane was riddled with bullets, but he shot down three attacking aircraft. Twice fainting from loss of blood and slipping in and out of consciousness, Barker guided the Snipe to a crash landing in Allied French territory. He was taken to a military hospital where he survived despite his injuries.

While recuperating from his injuries at a hospital in London, Barker met fellow Canadian air ace (and VC recipient) Billy Bishop. In 1919, the two men embarked on a number of commercial aviation ventures in Canada, including Bishop-Barker Aeroplanes Limited — an airplane charter, maintenance and sales company. The venture was not successful and shut down operations in 1922.

In 1922, Barker joined the fledgling Canadian Air Force (CAF). He was commissioned a wing commander and took charge of the air station at Camp Borden, Ontario. In early 1924, he became acting director of the CAF until it was replaced a few months later by the new Royal Canadian Air Force (RCAF). He was sent to England as a liaison officer with the Royal Air Force, resigning from the RCAF in 1926.

In January 1930, Barker became vice-president and general manager of the Fairchild Aviation Corporation of Canada. Two months later he died in an accident while flying a Fairchild KR-21 trainer in a demonstration for the Department of National Defense at Rockcliffe airfield outside Ottawa. Barker lost control of the aircraft during a steep manoeuvre and was killed when the plane hit the ice on the Ottawa River. Barker was buried with military honours in Toronto’s Mount Pleasant Cemetery.

In 2021, the RAF named one its P-8A Poseidon maritime patrol aircraft in honour of William Barker, VC. The Poseidon fleet is operated by 201 Squadron and based at RAF Lossiemouth on the Moray Firth in Scotland. Barker received the Victoria Cross for his heroic feats while serving with 201 Squadron in 1918.


See also The Great War in the Air.