Canada at the 1960 Olympic Winter Games 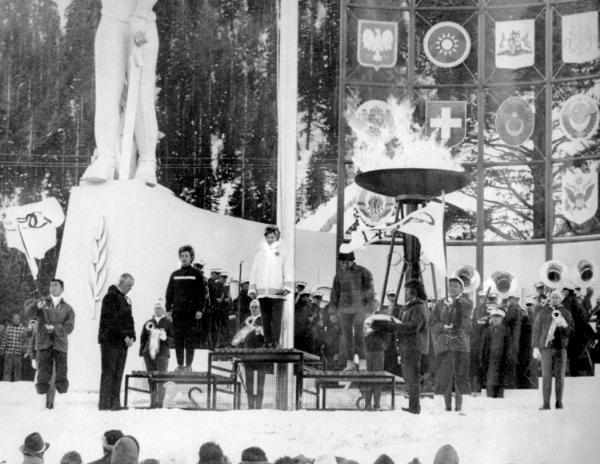 The 1960 Olympic Winter Games were held in Squaw Valley, California, located in the Sierra Nevada mountains. The American bid for the Games was spearheaded by Alexander Cushing, owner of the Squaw Valley resort, which in 1955 consisted of only one 50-room lodge and a single chairlift. European critics expressed concerns about the quality of the alpine runs and argued that Squaw Valley, at 1,900 m above sea level, was too high an altitude for the cross-country course. Despite these concerns and the fact that almost everything would have to be built from scratch, the International Olympic Committee chose Squaw Valley over famous European resorts like St. Moritz, Switzerland, and Innsbruck, Austria.

By 1960, the resort had been transformed through a massive construction program that cost about US$20 million. An entire Olympic city was built from the ground up, including basic infrastructure, hotels, ski trails and lifts, and the first Olympic village. The facilities and technology were state-of-the-art. The 1960 Winter Games were the first to use artificial ice for skating events and competitions (figure skating, speed skating and ice hockey). According to the February 1960 edition of Popular Science, a 600-ton refrigeration plant was needed to maintain the ice; the heat generated by the plant as a by-product was “used to warm spectators, provide hot water for showers, and melt snow on the roof of a main arena seating 9,000 spectators.” The American magazine lauded other technological advances at Squaw Valley, including the arena roof, which it declared “a marvel in itself…designed to move up and down as much as 22 inches as snow load and temperature cause its supporting cables to expand or contract.” It also highlighted the use of precision timing equipment and the processing of results “within two minutes by an IBM electronic computer, which will print the results simultaneously in English and French.”

Globe and Mail sports columnist Scott Young noted that the system was not foolproof: “For all the talk about the great electronic equipment here, there are bad gaps…The figure skaters compete to music from a record player that often skips, or doesn’t work… Lights in the hockey arena were out for part of the third period of the Finland-Germany game Sunday and flicked down and up from time to time… Hard on the goalies.” Overall, though, athletes and spectators were impressed by the facilities. Speed skater Jan Pesman declared that there was “no question but that this is the best rink in the world,” while the international jury praised the downhill course, despite earlier concerns.

More contentious, however, was the decision not to construct a bobsled run at Squaw Valley. After a poll indicated that only nine countries intended to send bobsled teams, the organizing committee decided not to build a bobsled run, making the 1960 Games the only ones not to include the sport.

The Squaw Valley competition included two new sports, though. Biathlon was added for the first time, as was women’s speed skating. “There is a great deal of opposition to the biatholon [sic] as being too warlike for Olympic competition,” noted Globe columnist Young. “Others feel that it is not warlike enough and that the competition should vary with shotguns filled with salt, to fire at the Canadian hockey team, or the figure-skating judges.”

In pairs figure skating, Robert Paul and Barbara Wagner delivered a flawless performance to take the gold medal, winning first place votes from every judge. Their routine was highlighted by a breathtaking one-handed “death spiral,” which had been pioneered by Canadians Suzanne Morrow and Wally Diestelmeyer in the 1940s. “One of the remarkable things about the Wagner-Paul performance was their complete ease and assurance,” wrote Scott Young. “Miss Wagner came out of the most difficult figures smiling.” Their teammates, brother-and-sister pair Maria and Otto Jelinek, finished fourth. 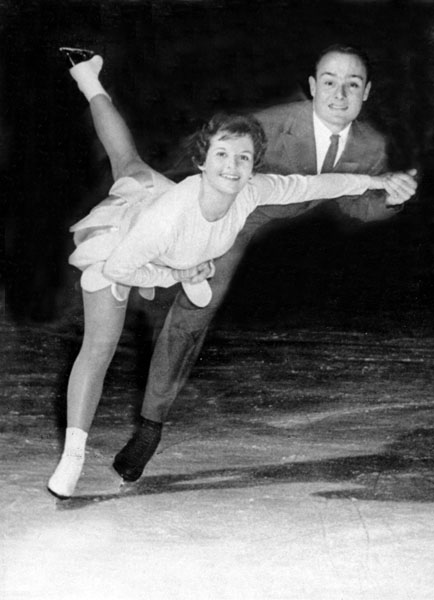 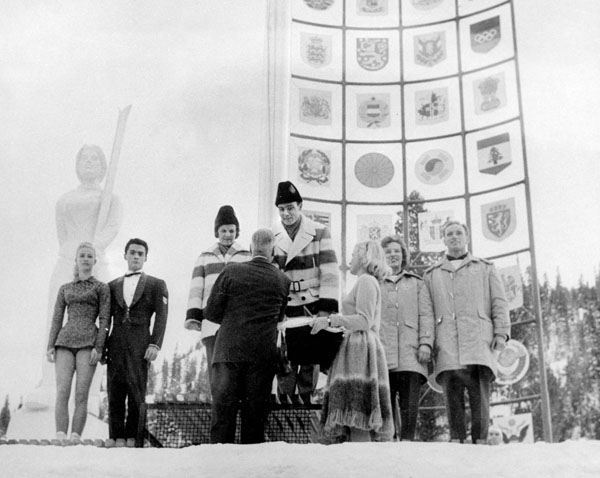 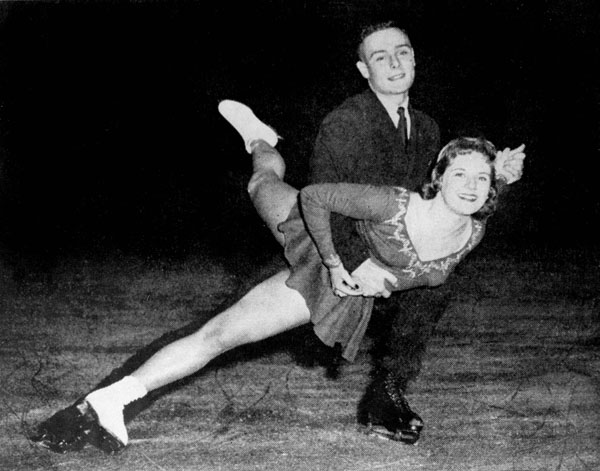 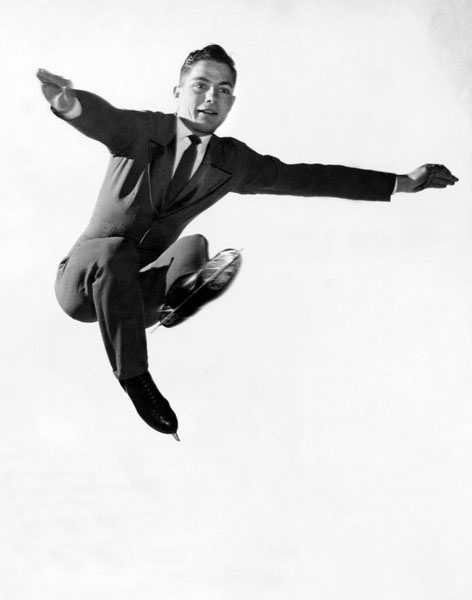 Canada's Donald Jackson competes in the figure skating event towards a bronze medal at the 1960 Squaw Valley Olympics.

Figure skating siblings Maria and Otto Jelinek fled with their family to Canada from Communist Czechoslovakia early in the Cold War. In 1955, they won the Canadian junior pairs title. After a fourth-place finish at the 1960 Olympic Games and a second-place finish at the 1960 world championships, the Jelineks were among the best pairs skaters in the world. In 1962, they returned to Czechoslovakia to compete in the world championships, despite concerns for their safety. After the International Skating Union threatened to pull the championships out of Prague if the Jelineks were not guaranteed safe passage, the Czechoslovakian government agreed to withdraw their citizenship, thus protecting them from arrest and prosecution. The siblings delivered a thrilling performance and won the world title for Canada in the city of their birth.

Canada was again represented in the ice hockey tournament by the Kitchener-Waterloo Dutchmen, who had won the bronze medal at the 1956 Olympic Winter Games. Unlike other countries, Canada traditionally sent its top amateur team to the Olympic Games. However, the 1959 Allan Cup champions, the Whitby Dunlops, declined the opportunity, and the Dutchmen headed to Squaw Valley in their place. The team included future Boston Bruins coach, general manager and president Harry Sinden.

The Canadians had a strong start to the tournament, defeating Sweden (5–2), Japan (19–1), Germany (12–0) and Czechoslovakia (4–0) before meeting the Americans. The US team, particularly goalie Jack McCartan, played a stellar game and defeated the Canadians 2–1. “The gloom around the Canadian contingent was impossible to penetrate. [Coach] Bobby Bauer stood by himself in the dressing room for minutes after the game, saying nothing,” reported the Globe and Mail.

It was a devastating loss. Although the Dutchmen went on to defeat both Sweden (6–5) and the Soviet Union (8–5) in the final stage of the tournament, the Americans had a perfect record. The US won their first gold medal in Olympic hockey at the 1960 Winter Games; Canada had to settle for silver. It was the last time Canada was represented by a club team at the Olympic tournament.

On 26 February 1960, 21-year-old Anne Heggtveit made Olympic history by winning Canada’s first gold medal in alpine skiing. Heggtveit handily won the women’s slalom, finishing 3.3 seconds ahead of her rivals — a convincing victory for the young skier who had placed 30th in the same event at the 1956 Games in Cortina d’Ampezza. “Canada’s Olympic team, still smarting from the 2–1 hockey defeat inflicted by the United States, Thursday night, cheered til’ the Squaw Valley peaks echoed today after Anne Heggtveit’s sweeping ski victory,” reported the Globe and Mail. Heggtveit was also the highest placed Canadian woman in the giant slalom and the downhill competition, finishing ahead of teammates Nancy Elizabeth Holland, Elizabeth Greene and Nancy Greene (who would win the giant slalom in 1968). (See also In Conversation with Anne Heggtveit.) 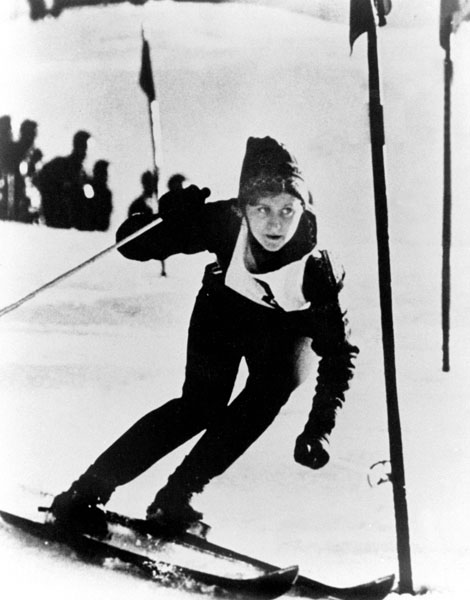 Canada's Anne Heggtveit competes in the slalom alpine ski event on her way to a gold medal at the 1960 Squaw Valley Olympics. 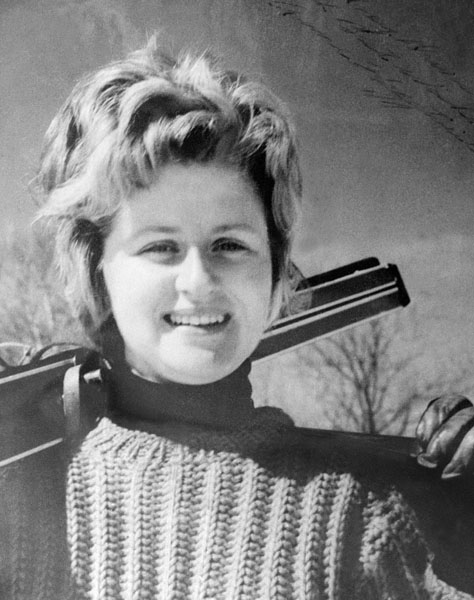 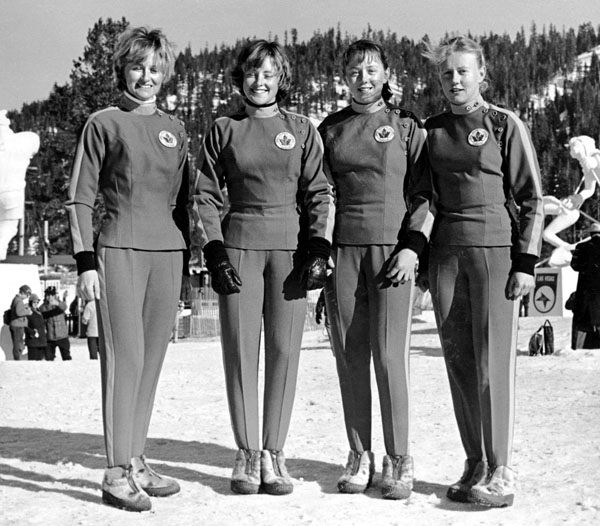 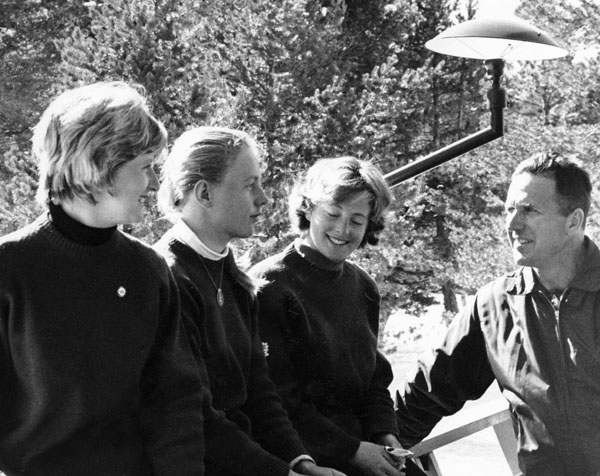