Pattison was born in Saskatchewan in 1928, the year before the Great Depression. With Canada’s unemployment rate eclipsing 32 per cent, Pattison’s parents moved to Vancouver’s east side in 1931. Growing up in the attic of a cramped rooming house, he learned from an early age to look for ways to get ahead.

Pattison had his first job by the age nine, selling subscriptions to Ladies’ Home Journal door-to-door. By age 13, he had become a skilled trumpet player, and as a summer job he toured rural Saskatchewan, headlining gospel revival meetings as “The Boy Wonder from Vancouver” (see Gospel Music). During that same year, Pattison met his future wife, Mary Hudson, also 13, at a country bible camp. The childhood sweethearts have been married for over 70 years.

While attending John Oliver High School in Vancouver, Pattison continued his entrepreneurial efforts. He worked multiple jobs, including hotel pageboy, paper delivery boy, fruit picker, general laborer and canner. After graduating, Pattison enrolled at the University of British Columbia (UBC), where he studied commerce. During his studies, he began to buy used cars, which he would re-sell on the UBC campus at a profit.

Pattison left UBC before graduating to work at the Bowell McLean car dealership. In 1961, at the age of 33, Pattison left the dealership to purchase a GM dealership that sold Pontiac and Buick brand vehicles. With the help of a loan from a local Royal Bank, which was eight times higher than the lending limit for that branch, Pattison would help pioneer the car leasing business in Canada. In the car leasing arrangement, Pattison allowed car buyers at his dealership to pay for their vehicles in installments, instead of paying the full cost of the car at the time of purchase. Despite the large loan, in the first year of his new dealership Pattison made $29,000. By the time he was 40, leasing cars to Canadians had helped him make over $1 million.

In 1967, Pattison began to expand his business ventures by buying 20 per cent of the shares of Neon Products, a leader in outdoor advertising. With a 20 per cent ownership stake, Pattison executed a hostile takeover of the company. The company went on to own and operate airlines, hockey franchises, department stores and consumer products such as Orange Crush soda.

Pattison served as the president and chairman of Expo 86, held in Vancouver in 1986. Pattison worked full-time without pay for over a five and a half-year period. For his efforts, Pattison was named an Officer of the Order of Canada on 29 December 1986, and in 1990 he was a recipient of the Order of British Columbia. Pattison was instrumental in helping Vancouver secure the 2010 Olympic Winter Games and served in an organizing role for Vancouver Olympic Committee.

Pattison has been known to give 10 per cent of his income to charity every year, including once placing a $1 million cheque in a church collection plate. In 2017, Pattison made the largest private citizen donation to a single medical facility in Canadian history. The $75 million donation was used to establish the Jim Pattison Medical Centre in Vancouver. Before then, Pattison had donated $5 million to an outpatient hospital in Surrey, BC, and made a $20-million donation to the Vancouver General Hospital. In 2016, the Jim Pattison Foundation made $12.5 million in other donations, helping secure Pattison’s legacy as one of Canada’s most philanthropic citizens. 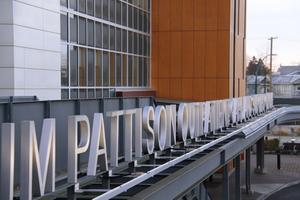 Pattison is married to his childhood sweetheart, Mary Hudson. The couple has three children, two daughters and one son. The Pattisons own a residence in Palm Springs, California, that once belonged to Frank Sinatra, from whom they purchased the property in 1984.

In 1990, Pattison’s 30-year-old daughter, Cynthia Kilburn, was kidnapped and held ransom for $200,000, which Pattison paid. Seven perpetrators were later arrested and convicted. A large sum of money was recovered.