John Rowand was born in Montreal, where his father, Dr. John Rowand, was assistant-surgeon at the Hôtel-Dieu de Montréal hospital. When he was 16 years old, Rowand became an apprentice clerk for McTavish, Frobisher, and Co — partners in the North West Company (NWC).

In 1803, shortly after joining the NWC, Rowand was posted to Fort Augustus (moved and renamed Fort Edmonton after the NWC merged with the Hudon’s Bay Company). About 1810, Rowand broke his leg during a bison hunt and was rescued by Louise Umfreville, who nursed him back to health. Louise was the daughter of an English fur trader and a Cree woman. Not long after, the couple married à la façon du pays, or “according to the custom of the country.”

John Rowand became a partner of the NWC in 1820. After the NWC merged with its rival, the Hudson’s Bay Company, in 1821, Rowand became chief trader for the HBC, managing Fort Edmonton’s food and fur trade (see also Fur Trade Routes). In 1823, he gained command of the HBC’s Saskatchewan district, which was headquartered at Fort Edmonton.

In 1826, Rowand was promoted to chief factor. He held this position until his death almost 30 years later.

HBC governor George Simpson, considered Rowand to be “one of the most pushing bustling Men in the Service... warm hearted and friendly in an extraordinary degree.” Known as “Iron Shirt” or “Big Mountain” by First Nations, Rowand’s fairness, bravery and business acumen made him the single most influential settler on the plains during his time.

In 1854, while on route to Montreal for a leave of absence, Rowand died suddenly while breaking up a fight between voyageurs. 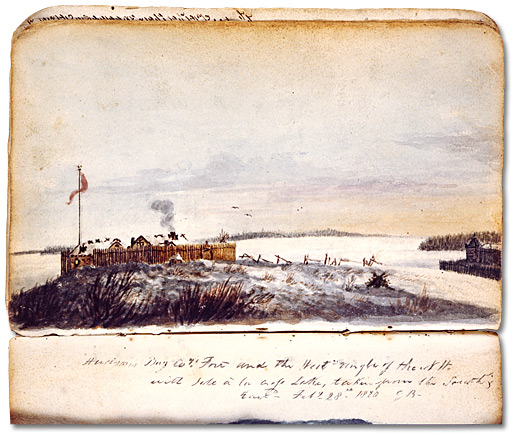