Margret Jonsdottir was born out of wedlock on a peasant farm in northern Iceland, the daughter of Jon Jonsson, a farmer, and Kristjana Ebenesarsdottir, a maid and caregiver to Jon’s wife Margret, who was bedridden with leprosy. Soon after giving birth to Margret, Ebenesarsdottir left and Margret was left in the Jonssons’ care. The couple had two sons, both had leprosy. When Margret Jonsson died in 1868, Jon remarried and moved several times. Margret was put into foster care and worked on local farms for two years. Though Margret’s father later came to get her, he died in 1879, when she was 13 years old.

By 1882, Margret was employed as a maid by a wealthy farming couple who wanted her to teach their two sons to read and write. Meantime, she immersed herself in articles and books about oppressed people, unhappily married women, and girls who wanted to break free from parental restrictions. Margret would later remark,

Angry and distressed I read the laments of oppressed persons,
unhappily married women, and the misfortunes of young girls.
And it is this evil that aroused in men a yearning to break down
all the fetters that tie people to veil and distress.

Margret heard that girls could get an education in America and by 1887 she borrowed money for fare and sailed to the United States. Margret settled in Gardar, an Icelandic settlement in Pembina County, Dakota Territory, where she worked to put herself through grade school and two years at Bathgate College, a business school. In the last three decades of the 19th century, about 12,000 Icelanders emigrated to North America. Icelandic immigrants who settled in Manitoba arrived in three main areas: Gimli, Selkirk and Winnipeg.

During the late 19th and early 20th century, progressive-minded Manitobans were strongly influenced by the social gospel (the application of Christian ethics to social problems). Icelandic women who were very active in community and church life through the Lutheran and Unitarian churches were guided by the movement’s teachings. They sponsored Sunday schools and worked with the poor and new immigrants from Iceland. 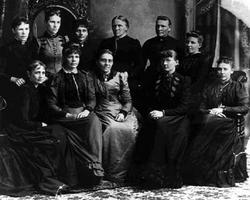 In approximately 1891, Margret Benedictsson moved to Winnipeg, where she attended evening classes in book-keeping, shorthand and typing at the Winnipeg Central Business College. She was a strong feminist and part of the women’s movement, which included the participation of women from various cultural groups and walks of life. As such, Benedictsson eventually developed a network throughout the province that connected Icelanders, Unitarians, feminists, suffragists and human rights and temperance advocates.

In 1881, the Icelandic Women’s Society was founded in Winnipeg. Its purpose was to help those in financial need and to provide support for the development of good citizenship — Benedictsson was a member. She staged plays and held raffles, banquets and tombolas (a kind of lottery) at the Winnipeg Unitarian Church to raise funds for scholarships for young women, financial assistance for newly arrived immigrants, and a counselor to help Icelandic girls find suitable employment.

In 1893, Margret married Sigfus B. Benedictsson, a well-known writer, poet, printer and publisher in the Manitoba Icelandic community. Sigfus had arrived in Manitoba in 1888 and promoted women’s liberation. During 1889–1890, he presented public lectures in Winnipeg regarding the emancipation of women.

After Manitoba's entry to Confederation in 1870, provincial law stated that, “No woman shall be qualified to vote at any Election for any Electoral Division whatever.” Certain voting rights were extended to property-owning women over time, including the right to vote in municipal elections (1887) and in school board elections (1890). However, women still had very limited voting rights (see Women’s Suffrage).

In Iceland, women could vote in church elections, and since 1882, widows and single women could vote at the municipal level. Margret Benedictsson and her peers carried that growing support for equal rights to Manitoba. In the early 1890s, Icelandic women organized a pioneering suffrage league in Manitoba. They campaigned for decades, petitioning the legislature and publishing a regular column in Heimskringla newspaper (founded 1886). While the Icelandic population remained somewhat isolated from the Anglo-Saxon majority, due to language and cultural differences, they did collaborate when sending delegations to lobby government.

On 2 February 1893, Benedictsson gave her first lecture on women’s rights to the Winnipeg Icelandic community. She became a well-known women’s suffrage speaker and organizer. However, because of her daytime household duties and childcare responsibilities as a wife and mother, Benedictsson usually lectured in the evening and pursued her writing late at night.

The Icelandic Women’s Suffrage Society, called Tilraum (translates to Endeavour), was founded in Winnipeg in 1908, with Benedictsson as its first president. At about this time, Benedictsson corresponded with Dr. Augusta Stowe-Gullen, president of the Dominion Women's Enfranchisement Association (DWEA, established 1889), and other suffragists in Toronto. The DWEA sponsored a lecture series across the country to increase public awareness and support for its cause: the vote for women and the franchise for women in each province.

The first English-speaking organization to officially support the women’s suffrage movement in Manitoba was the Woman’s Christian Temperance Union (WCTU). The Manitoba chapter was established in 1890. The WCTU was in harmony with suffragists who often fought against abuse of alcohol and the results of drunkenness.

Margret and Sigfus Benedictsson established a printing press in Selkirk, Manitoba, and in 1898 began printing the monthly magazine Freyja (woman). The magazine featured serialized fiction, biographical sketches, poetry, literary reviews, letters, and a children’s corner. But it was also a place to discuss women’s suffrage. Freyja had 500 subscribers, including both men and women across Canada. It is often distinguished as being the only women’s suffrage publication in Canada at the time.

Benedictsson often wrote stories in the magazine under male names, such as Herold, in order for her work and ideas to receive serious consideration from both men and women. Such articles advocated political, social, legal and economic equality for women.

The magazine drew attention to married women who had no choice but to bear children, and Benedictsson urged the province to become involved in social welfare. She went so far as to encourage readers to withhold affection and sexual relations in order to influence men to vote for candidates supporting equal rights for women. Benedictsson is considered by some historians to have been more outspoken than the majority of feminists in Manitoba when it came to her support for temperance, divorce, pacifism and the need for women to be in all aspects of public life.

Freyja ceased publication in 1910, when Sigfus put a hold on all mail addressed to the journal and refused Margret access to the printing press, which he had moved to Winnipeg.

In 1910, Margret divorced Sigfus, a bold and courageous move. At the time, marriage could only be dissolved through a lengthy process, requiring an Act of Parliament, usually proof of adultery and upwards of $500 in fees. Until 1971, it’s estimated that less than 1 per cent of marriage in Manitoba ended in divorce.

With failing eyesight, Benedictsson left Manitoba in 1912 with her son, Ingi, and daughter, Helen. They moved to Seattle and then Blaine, Washington. She died 13 December 1956, at her daughter’s home in Anacortes, Washington. Benedictsson had been living there for over two years with failing health. The front page of the Icelandic newspaper, Heimskringla, published in Winnipeg on 19 December 1956, contained her death announcement.