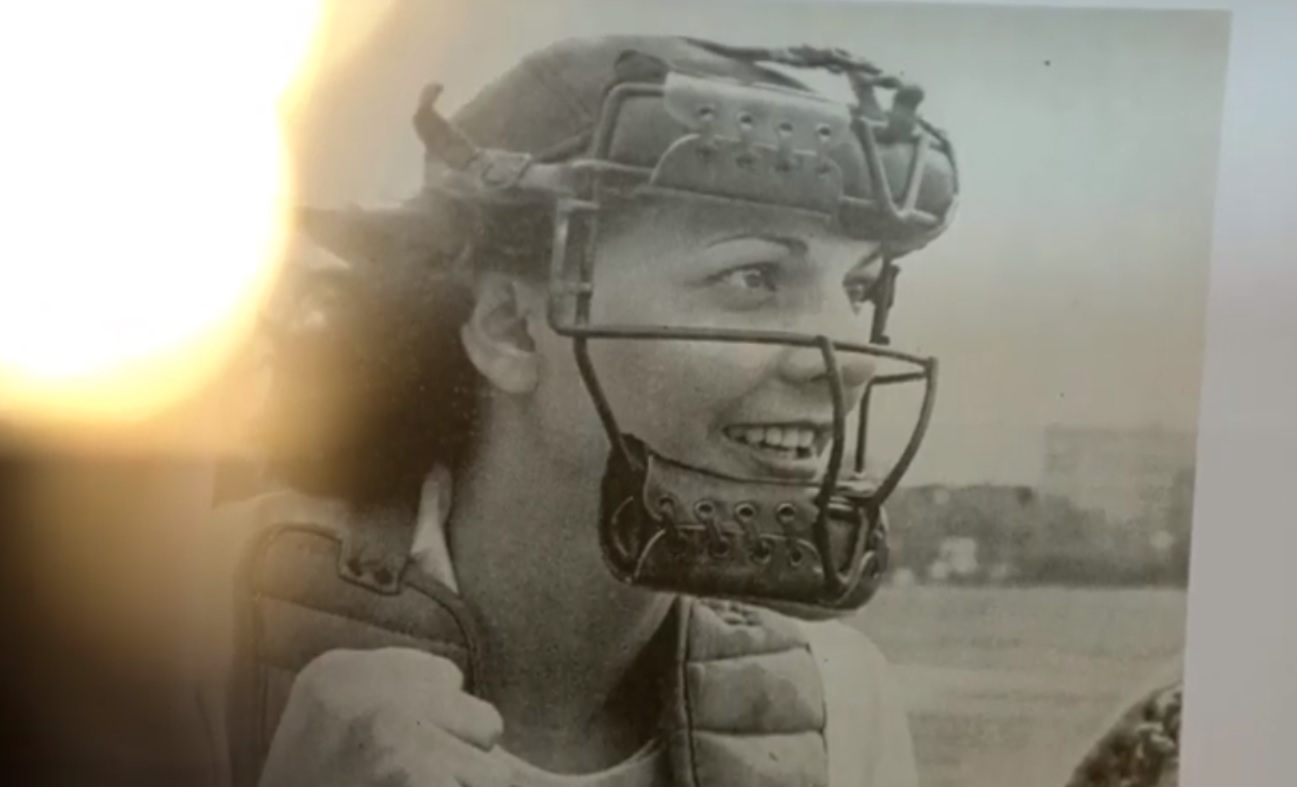 Mary Geraldine George was born in Regina to Elizabeth (née Lorenz) and Michael George, immigrants from Austria-Hungary who identified as ethnic Hungarians. Mary had four sisters and five brothers. She attended Wetmore Public School and Balfour Technical in her hometown. Her father worked as a mechanic. Her mother died when she was 11.

Baker started playing softball with older girls and young women at the age of 13. She became a catcher, the toughest defensive position. In her later teenaged years, she played for the Regina Maefairs of the Girls’ Intercity Softball League. In 1938, she joined the Army and Navy Bombers, a team sponsored by a department store at which she worked as a clerk. Under manager Arnold “Kappy” Kaplan, the Bombers won the provincial softball championship in 1940.

The players were paid salaries ranging from US$45 to US$85 per week, more than skilled factory workers earned. Each team consisted of 15 players, a chaperone, a business manager and a field manager, who was usually a former major-league player. Helena Rubenstein’s Beauty Salon was contracted to teach the players etiquette. The circuit lasted until 1954. About one in 10 players was Canadian.

Baker and others were recruited from Saskatchewan by Hubert “Hub” Bishop, a scout and well-known sports figure. Baker attended the original tryout camp at Wrigley Field in Chicago in May 1943 before being assigned to the Blue Sox of South Bend, Indiana.

During Baker’s time in the league, many modifications were made to the rules. In the inaugural season, the sport played was fast pitch softball, with the ball delivered underhand by the pitcher. Over the years, the ball got smaller and pitchers were allowed to throw sidearm before overhand pitching was permitted in 1948.

Baker played 930 games in the pro league over nine seasons with 244 runs batted in (RBI). She hit 44 career doubles, 20 triples and only one home run, which was struck in her rookie season. She made up for a lack of power by using her speed on the basepaths. Baker was credited with 506 career stolen bases. Behind the plate, she was regarded as the best defensive catcher in the league and was known for catching opposing runners trying to steal. She was named the league’s all-star catcher in 1946.

Baker, who also occasionally played second base, was in her eighth season with the Blue Sox when she was traded to the Lassies, a team in Michigan. (One of Baker’s sisters, Gene McFaul, played 15 games for the Lassies in 1948.) Baker skipped the 1951 season before completing her professional playing career with the Lassies in 1952.

The personable Baker, who was given the nickname “Bonnie” by a public address announcer, was featured in many daily newspapers, as well as in mass-circulation magazines. Life magazine opened a photographic essay on the league in 1945 with a striking image of Baker wearing her catcher’s mask and chest protector. SPORT magazine profiled her in a May 1947 article titled, “Bonnie’s the Belle of the Ball Game.”

On 17 August 1952, she appeared on the popular television program “What’s My Line?” in which a panel of celebrities ask questions of a mystery guest to determine their occupation. “In the course of your work, do you ever take a part of your costume off?” asked panelist Hal Block. “Yes,” she replied, referring to her catcher’s equipment, as a live audience howled with laughter. While Block’s line of questioning presumed Baker was a striptease dancer, panelist Dorothy Kilgallen correctly guessed her occupation. “I certainly think Mrs. Baker is an argument for allowing women to play in the big leagues,” Kilgallen said.

On 6 June 1950, Baker was traded to the Muskegon Lassies, a troubled franchise soon to be transferred to Kalamazoo, Michigan. Baker became the only woman, as well as the only player in the league, to manage a team. Many of the other managers in the league had major-league baseball experience as players, including Max Carey, Dave Bancroft and Johnny Rawlings. (Another manager, Johnny Gottselig, a Canadian, had played in the National Hockey League.)

The Lassies struggled, finishing the season in last place in the eight-team league with a record of 36–73. Afterwards, the league barred women from managing. Baker skipped the 1951 campaign to give birth to a daughter.

Baker returned to playing softball in her hometown. In 1953, she led the Regina Legion softball team to provincial and Western Canadian titles. The team earned a berth in the World Ladies Softball championship in Toronto in 1953. Baker hit .500 in the tournament (eight hits in 16 at-bats) in a losing cause. In September, the Legion team lost a sudden-death game for the Canadian title to Toronto Kalyx.

Baker continued playing softball for several seasons until breaking her ankle in 1958. She also became a noted bowler and curler, and managed the Wheat City Curling Club in Regina for 25 years. In 1953, she joined two of her brothers in operating the Hunt Club, a restaurant in a Regina mansion.

In December 1964, Baker was hired as sports director of radio station CKRM. She was introduced as Canada’s first woman sportscaster to the all-male sports reporting corps at a press conference held by the Saskatchewan Roughriders to announce the signing of Eagle Keys as head coach. Baker insisted she be treated as one of the boys.

“I’ve been on radio and television many times before, but it’s always me who was being interviewed,” she said. “I’ve never been the interviewer.”

In 1936, she married Maurice Griffith Baker. He enlisted in the Royal Canadian Air Force in late 1941. After the war, he was involved in publishing magazines for military veterans. He died in 1962 at the age of 52. The couple had one daughter, Maureen, known as Chick, a nickname she was given as a baby by her mother’s teammates.

Interest in the All-American league was revived after the release of the movie A League of Their Own in 1992. The film starred Madonna, Tom Hanks and Geena Davis, whose character, Dottie Hinson, has a headstrong younger sister in the league and a husband fighting overseas, echoes of Baker’s own experience. Baker herself pronounced the movie to be “funny and very entertaining.”

In 2015, a mural highlighting Baker’s career was painted on a kiosk by artist Carly Jaye Smith in Regina’s Central Park. The park’s softball diamond was also named after her that year.

In 2016, Maureen Ulrich toured Saskatchewan with her one-woman play, “Diamond Girls: Diamonds in the Rough.” The play tells the story of three women from Saskatchewan who played in the professional league, incorporating the biographies of Baker, Daisy (née Knezovich) Junor, and Arleene (née Johnson) Noga.