John “the B” Marchand from Okanagan Reserve #1 was a Bren gunner during the Second World War. He served in the infantry from 1943 to 1945. Learn more about Marchand’s time in the trenches during the Italian Campaign. Please be advised that Memory Project primary sources may deal with personal testimony that reflect the speaker’s recollections and interpretations of events. Individual testimony does not necessarily reflect the views of the Memory Project and Historica Canada. 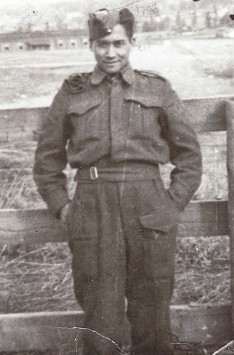 "These crazy guys going from one side of the road to the other, they were being peppered with artillery. That was our last real fight."

My name is John Marchand. I was born in Vernon, 1921. When we became infantry, we were eight, nine battery and they called us the same, 8/9 109 Infantry Battalion [later renamed The Lanark & Renfrew Scottish Regiment]. And then our first job was crossing this river [in Italy], attacking. And lieutenants and sergeant-majors are telling us, oh, it’s just, it’s just an ordinary river, it might be 10 feet deep in some places. But if you want to take a big running jump, you’ll hit land, in the water. And I was a Bren gunner, a machine gunner, and they said, keep your arms up out of the water if you can. And we took our running jump and everything but I, as a Bren gunner, we have these pouches, Bren clips in it, and you had your pack on your back with your food and your spare socks and things like that in it. Then you have your water bottle on the side and your first aid thing on your front here. And then take a running jump, hit nothing. And by the time I got to the bank, this is two o’clock in the morning, and by the time I got to the bank, they were already shooting at our direction.

Being the Bren gunner, I emptied all the water and everything and took it out and put it [the gun] back together again and got to the bank and then the guy next to me said, that building there, there are flashes coming out of the building, get them first. Every machine gun has a tracer bullet, has a light and where we see the lights, you’d have to shoot at those lights. And that’s what I was doing. Only thing is, I wasn’t standing up. The bank of the river was there and I was just tall enough, maybe bent just a little bit with my gun on the ground and there was bushes around there, reed and that. Had my head beside, not aiming, just moving the tracers. I’d shoot at them, empty a whole round and get a new one, put it in and then they’d spray us, the shrubs along the banks, you could hear them just breaking and you know, being hit by bullets. And then there’d be another blast and somebody would say, oh yeah, on the left, and I’d fire at that. And then that would go out and would quit. Then over here, another one, in the same place again. And it was just like that for, oh, I don’t know, half an hour I guess. 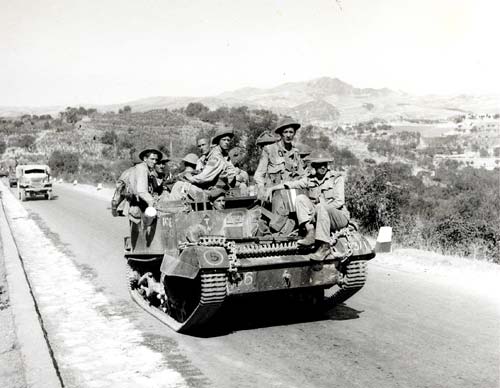 Inland from Ravenna was the intersection, the tanks already got to that part, armoured services, all the trucks, the supplies. And when we went through, 2:00 in the morning, to go further ahead past them, we got halfway across the field and we were shelled, so was our digging in right there. We couldn’t move because of the shelling and there was a ditch across the field that they was firing at us from. So we just dug in right there, it got daylight enough to where our artillery could see where they were, they started shelling that part. But we didn’t move in there until the following evening, got dark again. Then we’d move up to the ditch where they were.

While we were pinned down in the field, there’s a little building in the middle of the hill that they used for maybe storing their equipment or something, we crawled into it, to have a bite or something. And mostly to bandage some guys up that had arm cuts or leg cuts or whatever. Anyway, I was in there with this, his name was Leroy, and we were in there, this was probably in the afternoon, daylight, this building had quite a lean-to, like I had to bend over to go into it, it had a lean-to on it but it was open on both sides. And he walked out for some reason and as soon as they seen somebody move, they start shooting at him. Of course, they hit him. We brought him back in. We have a thing that has a, it’s a needle on it, break that thing and stab him and then press it into him, some kind of painkiller [morphine]. We gave him that but he was bleeding chest and his back. Put all of our bandages, put everything on him. 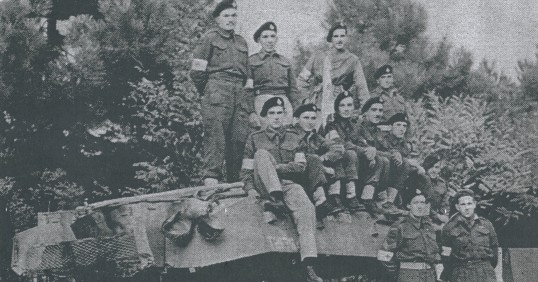 And then by that time, we got word to the medics and medics of course are allowed to go because they have the big red cross, white circle on them. So they came, two of them came and put him on a stretcher and took him away. From that time after they moved Leroy, then we moved up to the next ditch, then the tanks, Germans started firing at us again and they were hitting the bank on that side, we’re on this side. And then when they broke through to where the banks were hitting the second wall, then they started peppering us with mortars. And that’s the nearest I got to being hurt I guess, was that it hit so close that it popped right out of your little [fox]hole, popped right out and moved you over about five or six feet. And you couldn’t hear, you couldn’t see, you couldn’t breathe. You had to crawl back into the hole again.

We called for artillery gun and this time, air support. And once they started dive bombing them, then guys went through us and went ahead. And then on our way back to the intersection, they were shelling that intersection and before we got to the intersection, guys were going from this side of the road to this side, on our way across and the shrapnel would take one leg off and you’d hop across and dive off the road. And we seen stuff like that. These crazy guys going from one side of the road to the other, they were being peppered with artillery. That was our last real fight.

And growing up, nine and ten years old, I was with the guys going rounding up wild horses and then all through my teens, I was breaking horses. And then 15, I went to logging camps and it was always 15 or 20 big rough six-foot, 250 pound guys and everything. And you get this knack I guess is that even if you’re small … there are some things you can do. And there’s little ways and means that you go about doing it. And you use that same thing in hiding and protection and things, with a real enemy. What it is really, it’s machine gun bullets. You can’t hide from the artillery and mortars but you can from the people actually shooting at you. It was a job that had to be done, thank the guys that did. And that’s about it. 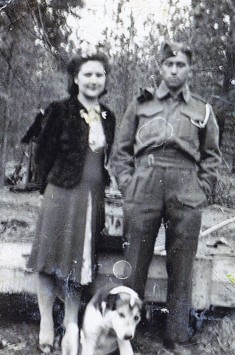 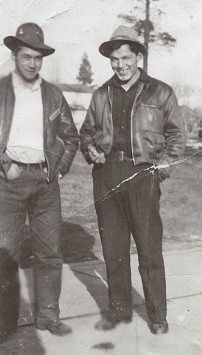 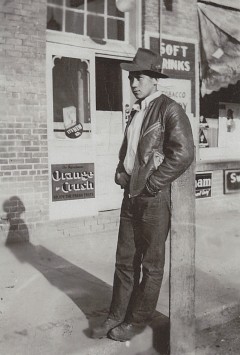 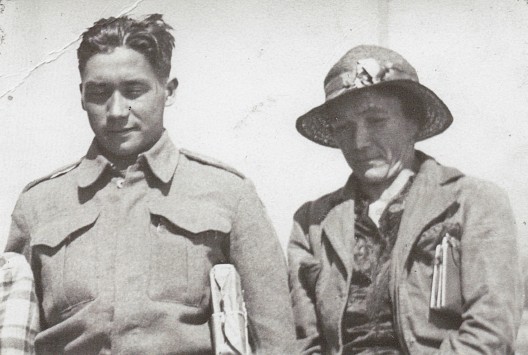