The area's first inhabitants, the Interior Salish, followed the seasonal sources of animal and plant foods (see also Indigenous Peoples in Canada). The quest for food was regimented by an annual cycle that took groups of people to various places, based on the availability of resources. The first name given to the location now known as Vernon was the Salish Nintle Moos Chinor  "jumping over place where the creek narrows," which describes a section of Swan Lake Creek that now passes under Vernon's main street.

Fur traders began travelling through the area after David Stuart explored for the Pacific Fur Company in 1811. The presence of priests in the valley circa 1859 led to a second name, Priest's Valley. The first settlement in what was to become Vernon began in the 1860s, following the discovery of gold in the nearby Monashee Mountains. The establishment of several large ranches followed. A townsite, Centreville, was laid out in 1885 and the name was changed to Vernon in 1887 in honour of Forbes George Vernon, a pioneer settler who became chief commissioner of Lands and Works for British Columbia. 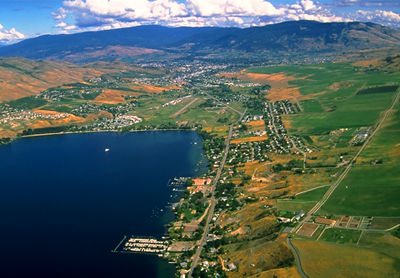 Aerial view of Vernon, BC.

Development of the city and area surged ahead when the Shuswap and Okanagan Railway was constructed, connecting Sicamous, on the Canadian Pacific Railway (CPR) mainline, to Vernon in 1891. An extension of the railway to nearby Okanagan Landing led to the launching of the first CPR sternwheeler, the SS Aberdeen, on Okanagan Lake in 1893. Fruit growing began in the early 1890s but agriculture greatly progressed when an irrigation ditch, the Grey Canal, was built in 1906 to supply water to farms and orchards surrounding Vernon.

Vernon's military history began in 1908 with the formation of the Okanagan Mounted Rifles. The establishment of a military training camp brought thousands of recruits to Vernon during the First World War (WWI) and the Second World War (WWII). This camp continues to function today as a summer training centre for cadets.