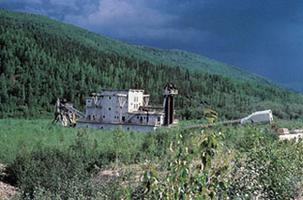 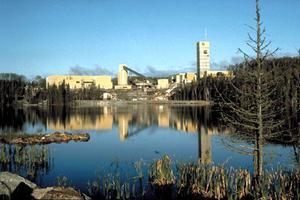 Hemlo mine in northern Ontario (photo by Brian Milne/First Light). 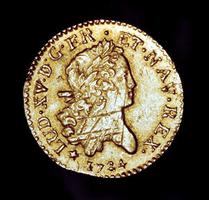 Gold (Au) is a bright, shiny, yellow metal, notable for its high density (19.3 times the weight of an equal volume of water) and valued for its extreme ductility, strong resistance to corrosion, lustrous beauty and scarcity. Pyrite, or fool's gold as it is sometimes known, can be distinguished from real gold by its brittleness and hardness as well as the fact that it appears black in powder form.

As it is the least chemically active of all metals, gold usually occurs in a free or uncombined state. It is found as nuggets, flakes or dust in gravel and sand deposits along creeks and rivers, but more often gold is recovered from veins (called lodes) in bedrock. Gold is also produced as a by-product of base-metal mines; about one-fifth of Canada's gold production comes from this source.

There are various ways to separate and recover gold, depending upon the nature of the ore. When gold occurs in a relatively coarse, free state, it can be recovered by mechanical means such as gravity traps and shaking tables, where the gold separates out because of its high specific gravity. Cyanidation is a chemical process used to recover gold that is very finely distributed in the ore. The process is complex; it involves adding a cyanide solution to finely ground ore and then agitating it in the presence of air to dissolve the gold. After a variety of treatment steps, the solution containing the gold is clarified and the gold is precipitated by the addition of zinc dust to the solution. The carbon-in-pulp stage of this process uses activated carbon to collect the gold without having to filter the ground ore slurry. The activated carbon is stripped of its gold in an acid bath and then recycled.

Once the gold is separated from the ore and is in the form of an impure precipitate, it is placed, along with a fluxing agent, into a high-temperature furnace. A chemical reaction takes place, in which the flux and the impurities combine to form a slag and the molten gold sinks to the bottom of the furnace where it is drawn off and poured into moulds to form doré bars, which contain the gold and any silver that may have been present in the original ore.

World industrial demand for gold includes jewellery, electronics and official coins. Gold has been a symbol of wealth from the earliest civilizations to the present. Even though it is too soft for weapons or tools, people have treasured gold for its decorative and monetary value. Since it is chemically inert, it has long been popular in dentistry for crowns and caps. Resistance to corrosion, along with electrical conductivity, make it useful in precision electronic equipment. When a thin film of gold is applied to window glass, a building's thermal properties are improved dramatically, reducing the amount of heat gain in the summer and heat loss in the winter, as in, eg, the Royal Bank building in Toronto.

Gold is found across the Canadian Shield, in British Columbia and Nunavut, and on the island of Newfoundland. It was first discovered in Canada in 1823 along the shores of the Rivière Chaudière in the Eastern Townships of Québec. In 1858, following the famous rushes in California and Australia, gold was discovered in the sands of the Fraser River in the interior of BC, starting the Cariboo Gold Rush. Almost 40 years later, the legendary Klondike Gold Rush in the Yukon marked the beginning of one of the most productive periods in Canadian gold-mining history.

The early 1900s saw the establishment of several major gold-mining camps in northern Ontario, including Porcupine, Timmins, Larder Lake, Kirkland Lake and Red Lake. The gold excitement swept across the provincial boundary into northern Québec and gold was discovered at Bourlamaque, Val d'Or, Chibougamau and Malartic. At the outbreak of WWII, Canada's gold-producing capacity was expanded in order to help meet wartime expenditures. Production reached an all-time high of 166 tonnes in 1941 but then declined dramatically because of wartime conditions.

By 1970 rising production costs had forced the closure of many gold mines in Canada and production dropped to one-third of peak levels. Changes in international monetary policies led to a startling increase in gold prices in the late 1970s (see Gold Standard) which, in turn, encouraged increased activity in gold exploration and new mine development. The 1981 discovery and subsequent development of the large Hemlo gold deposit in northern Ontario, followed by other discoveries and developments in each of Canada's provinces and territories, resulted in increased production and a renewed importance of gold to the Canadian economy. Gold production reached nearly 175 tonnes in 1990 and 1997 and 150 tonnes in 2001 before falling in consecutive years to a 22-year low in 2008, at 94.8 tonnes. The value of gold increased as production decreased, reaching a record high in 2008 when Canadian gold production increased 15% in value to $2.82 billion from $2.47 billion in 2007.

The first to prospect and mine in North America were Aboriginal peoples who used minerals, including gold, copper, silver and cobalt, for tools, weapons, art and other objects. They discovered gold throughout the Pacific northwest and their attempts to defend their claims led to the Fraser Canyon War of 1858 and the formation of Indian reserves in British Columbia. In the 1850s the Nlaka'pamux people of the Thompson and Fraser Rivers began to sell gold to the Hudson's Bay Company. James Douglas, governor of British Columbia at the time, tried to keep the discovery of gold secret to avoid an influx of American miners, as the British had not formally colonized the territory, but rumours of gold soon began to circulate and miners began arriving. In July 1857, the Nlaka'pamux expelled miners from their territory along the Fraser River. By the summer of 1858 miners had gained a majority and driven the Aboriginal people from the river. Douglas urged the British government to establish a presence in the area. Tensions grew between the miners and the First Nations with retaliatory attacks, and armed troops were called in.

Today there is a close association between the location of First Nations communities, known mineral deposits and mining activities. There are approximately 1200 Aboriginal communities located within 200 km of mineral and metals activities, according to Natural Resources Canada. Since mining was industrialized in Canada, the First Nations have had little say in decision-making with regard to mining on or near their ancestral lands and have received little benefit from it. The situation is changing, most importantly because of advances of Aboriginal peoples with regard to recognizing their rights to land and title, and the negotiation of land claims. Although there are no recent figures available on Aboriginal employment in gold mining operations, there are Aboriginal workers in the mines, most commonly employed as labourers, miners, truck drivers, equipment operators and maintenance operators.

Canada's mining industry is expending tremendous effort to overcome a long history of environmental damage. One example of mining's environmental impact is gold mining's release of thousands of tonnes of toxic mercury and cyanide into the environment. In 2004, the Mining Association of Canada (MAC) began promoting a program called "Towards Sustainable Mining." The program calls on mining companies to develop a social and environmental conscience. Among the program's guiding principles are the stated goals of "contributing to global initiatives to promote the production, use and recycling of metals and minerals in a safe and environmentally responsible manner; seeking to minimize the impact of operations on the environment and biodiversity, through all stages of development, from exploration to closure; and working with communities of interest to address legacy issues, such as orphaned and abandoned mines."

The program is self-monitored, with measurement criteria established by MAC in the areas of tailings management, energy management, external outreach and crisis communications management. MAC members are required to measure and report on their performance annually. While it is as yet unclear if the program is an innovation to applaud or merely "greenwashing," the existence of the program is a somewhat startling development in the industry. 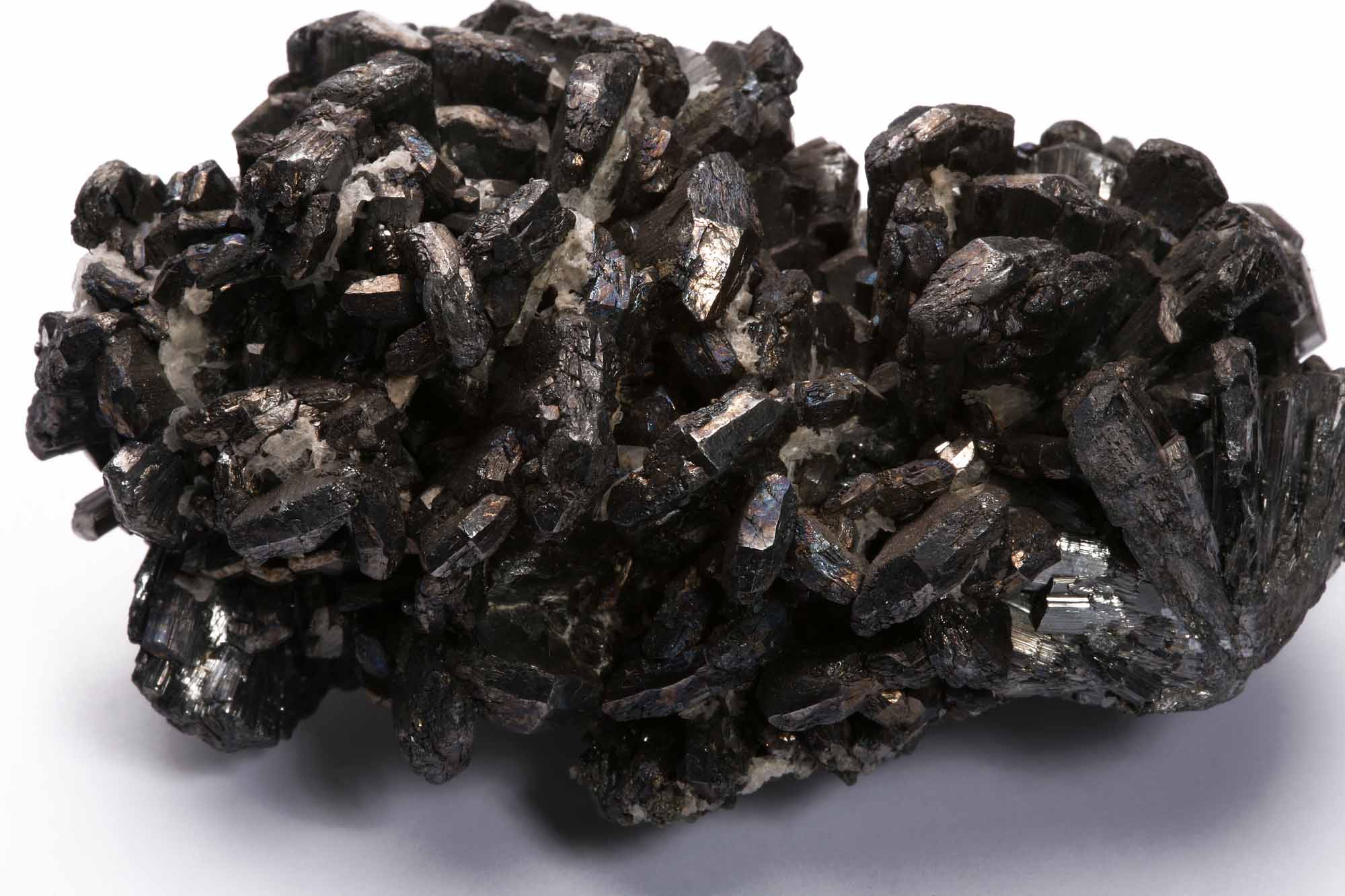